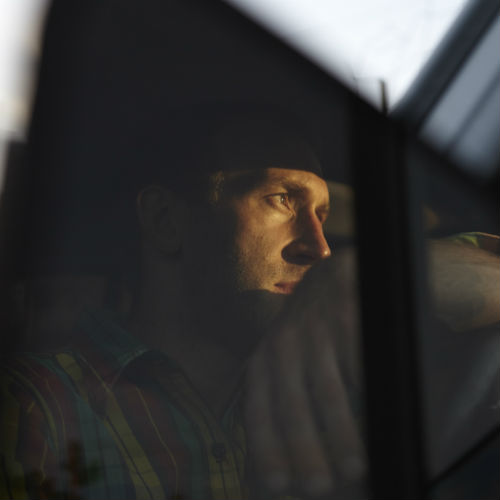 Hey RJ. I’m pretty excited about your latest release. How long have you been working on it and how would you say has your sound evolved over the years since ‘The Colossus’?
Thanks! I think I’ve come to terms with the fact that making good and/or effective music doesn’t always equate to making something that is hugely grandiose or ambitious. EVERY chord change doesn’t need to be the hippest, most challenging thing. I kinda let my hair down in ways, about not feeling like I need to prove a point about stuff like that at every juncture.

I’m happy to hear many instrumental works on ‘More Is Than Isn’t’, while it also features some amazing vocalists and rappers. Talk a little about the your ideal balance between the two and share a bit how these particular collaborations came about.
It’s usually obvious to me what stuff can be built into an instrumental song, and what stuff wants to just be a beat, pretty much. The latter all go into a pile. And then I start think about who might be a good fit for it, and I do some outreach. The folks who are into it, and motivated, usually rise to the occasion, and off we go. When it came time to put the tracklisting together, I really just do a similar instinctual assessment of what is feeling right as a set of tunes. Stuff gets cut, or held onto for another time. And that’s pretty much it.

The release features a healthy portion of genres with nods to funk, disco and of course, hip hop. How would you describe your particular style, and what music inspires you these days?
I don’t really find much satisfaction in describing the style of what I do. The genres you mentioned are important contributors, but jazz is a big deal to me, as is ambient music, early electronic music, and so much more. Making records is a fun adventure for me, and describing it in an odd way makes it less fun, somehow.

It sounds like you’re still happy with the MPC sampler. Can you describe your production techniques and whether or not they have stayed pretty much the same since you started?
Definitely am – I’ve kept my old tools, and add new ones, I’d say. I relied on midi programming more on this record than anything I’d done before. I also got comfortable with the MPC sounding like a sampler/drum machine, as opposed to trying to mask its’ inherent digital nature. There’s new mics and compressors and whatnot in the studio, and also the boring stuff like just plain old practicing to improve as a musician and writer; it all contributes really.

Tell us about ‘Her Majesty’s Socialist Request’ music video. Some great dancers in there… Are you still working on music for film and television?
No real film/tv stuff going on at the moment. I just take it as it comes, really. Yea, that video came together very well, I was excited about it. I found Reggie here in Philly, and just set the thing in motion – he really deserves most of the credit for it!

Once again this album is released on your very own Electrical Connections label. Talk about the difficulties and the rewards of running your own label. What can we expect to see and hear on the catalog in the future?
It gets easier as time goes by – I know the workload, and what to expect in terms or requirements. It feels good that it is stable – I don’t make a killing off it, but i don’t have to like go into major debt to keep it afloat or anything. I like owning my masters, feels good. I’ll be putting out a Vol. 2 of “More Is Than Isn’t”, and hopefully also putting out Soul Position and Icebird records shortly, as well.