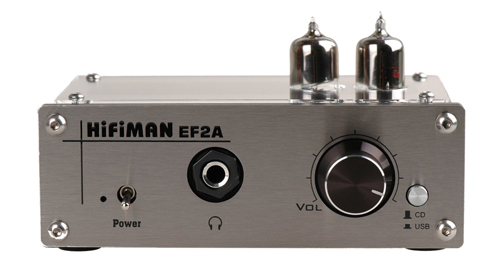 I’ll admit, it took me a while to shell out some cash for a desktop headphone amplifier. And it wasn’t until I had a pair of high impedance headphones, which actually needed the extra boost, that I ventured out in search of an affordable entry-level amp. I wanted something small, with a front-facing knob, headphone jack, and a power switch. And yes, I wanted something pretty, preferably with a pair of glowing analog tubes (how could you blame me). Could I succeed in finding an amp that would satisfy all of my cravings and not break the bank? You already know the answer to that. But did I mention that this little guy is also a DAC (digital to analog converter – like your sound card)…

Founded in New York City in 2006, a brainchild of Dr. Fang Bian, HiFiMAN is a manufacturer of high-performance headphones (including the critically acclaimed Planar-Magnetics), portable audio players and amplifiers. The company also operates an online store at head-direct.com. This particular desktop headphone amplifier is in a family of a more powerful EF5 and a larger EF6. But it is the EF2A‘s price point (at $169 USD) that makes this little guy a bit more attractive.

Of course, the two gorgeous tubes propel the EF2A as the centerpiece on my work desktop, while the acrylic plexiglass top cover allows you to see all of the intricate circuitry inside. The aluminum housing gives the unit a sleek look, which will turn many heads, if, like me, you like to show off your equipment and gadgets. The front facing power switch makes it convinient to turn the unit on and off – I only mention this because my home headphone amp has a switch in the back, which makes it a bit awkward to feel for every time I need to flip it. The sizable volume knob is solid and smooth. I find the amp to be pretty powerful for my headgear and keep it usually at a 10-20% setting (and lower the input signal a bit).

And look, you don’t need to be an audiophile to be able to compare the sonic gain from adding a headphone amp into your audio chain. The bass feels tighter and punchier, the mids feel a bit fuller, and yes, I’ll claim that the vacuum tubes make the sound a bit lively and warm. The outboard power supply keeps the circuitry quiet, and I haven’t heard any interference picked up by the chord. The lamps don’t get very hot, and although I do not recommend you touching them, you won’t burn yourself if you do. The output impedence is in the 32-300 Ohm range with a 20-20kHz frequence response, and 95db signal to noise ratio.

As mentioned above, the EF2 comes with a built-in DAC, and allows you to switch between the RCA and USB inputs. The onboard Burr-Brown (Texas Instruments) PCM2702 chipset supports 16-bit stereo at 32kHz, 44.1kHz and 48kHz via USB 1.0 Audio stream at 12Mbps. It also features 8x oversampling digital interpolation filter and an analog output low-pass filter. And although it’s not exactly the best DAC on the market, I’m pretty sure it’s better than the integrated sound card in your desktop computer or the naked headphone jack on your Macbook Pro.

Although I have not done this myself [yet], a few people ventured out and replaced the default stock 6J1 lamps with 6AK5 family of tubes (the complaint I heard was that they were slightly ‘bright’ sounding). A matched pair of Mullard 8100 or CV4010 tubes can run you another $20 USD, if you find a good deal on eBay. I thought that this could be a great project for later, but by the time I finished composing this sentence I bought a matched pair of Raytheon 6AK5 60’s tubes for just ten bucks. I’ll let you know what I think of my upgrade.

Bottom line… The EF2A is a perfect entry level headphone amplifier that delivers the bang for the buck. It’s suprisingly affordable and features a DAC that makes it feel like two units in one! Grab this for your desktop at work, and you’ll thank me later…