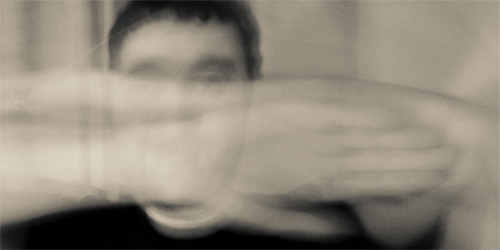 Tell us about the field recordings on Get Lost.
The recordings were made by me on various locations both in Amsterdam, Sweden and also in the UK, from the obvious ocean and nature sounds through to peoples conversation and everyday objects, the hiss and noise from the field recordings has been mostly left in the final mix-downs for each piece to help the recordings appear in a living state and not overly processed. I wanted to push the semblance of the album into the places between consciousness and smudged reality, which works for the album as a whole.

I suspect that the theme of the album is as much about traveling as it is about life itself. Can you talk about your journey through music?
It was a joint decision for both myself and Colin (Time Released Sound) to settle on a theme (and title) for the album, we talked on the phone a lot both before the album and during it’s creation, the “travel” theme, for me led to the the obvious fact that most people get lost in everyday life, both in reality and also in their minds – this is possibly something a lot of people can relate to. I wanted Colin, as the label owner to have as much input as he felt necessary from a thematic perspective and also for the visual design which was already embedded in his head – the rest unfolded and became clear over the duration. My personal journey through music started over 12 years ago, I have traveled a lot musically myself over that time in my own work and with various collaborative projects allowing me to alter the way I see and hear music from others perspective. I have always tried to keep Maps and Diagrams on the verge of reality and speculation, although my output has a clear link which is connected musically I have always tried to venture into something different for each release, with the presumption that each release will keep the listener guessing on my musical whereabouts. There are two new Maps and Diagrams albums due this in October on Ian Hawgood’s Nomadic Kids Republic imprint which explore new and different avenues of sound.

I’ve been following your music since Neo Ouija’s Cottage Industries 2 (2002) followed by Sutemos’ Intelligent Toys series. You’ve been quiet a prolific composer. How do you find the time and inspiration for so much output?
I go through various phases in life, some structured, some less-organised – this is how I find inspiration, in lifes anagrams. I can have a manic period of writing music for a while and then nothing for months, I take advantage of the visualisation while it lasts, make hay while the sun shines – as the saying goes. Having time to concentrate on musical projects is always a positive, it allows freedom and creativity, I don’t set myself structured time for music, it happens as and when and the same can be said for inspiration – I can be inspired by what’s around me at a particular time, by situations, listening to music, travelling and certain states of mind – sometimes this is a good thing, sometimes not.

Care to shed some light on the origin of the moniker Maps And Diagrams?
The name came from a job I used to do, I used to make tactile maps and diagrams for visually impaired people to find their way around the London Underground or around shopping centres, art gallerys and other public places which were hard for partially sighted people to navigate. One day (in 1998) the fact that it’d be a great name for my musical output hit me and it stuck from that moment on.

Tell us about your new project, Atlantis.
Atlantis was again, another shift in style and I wanted to keep it separate from Maps and Diagrams as it was heading in a more abrasive and automated direction, using older instruments with minimal involvement in the production, inspired by the early electronic music of the 60’s. I use less processing and field recordings for Atlantis and it is a raw sound, less-polished and more “machine” influenced, more suited for cassette format too I think, hence the “House of Tomorrow” tape release on Digitalis Limited this Summer. The full-length Atlantis album The Day the Music Died is set for release this year on Handstitched* and also another tape release on Chemical Tapes soon too.