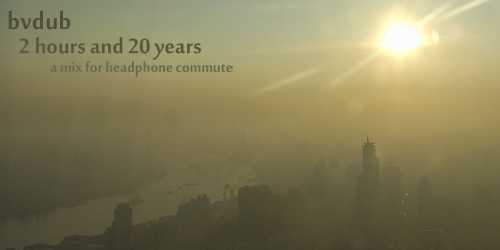 This weekend we have another outstanding mix for you! 2 hours and 20 years has been put together by Brock Van Wey, releasing under bvdub, exclusively for Headphone Commute. It is indeed special, since this is Brock’s first mix made in 15 years with moments of elation. It was made on a 2-hour morning bus ride from Shanghai, where Brock reflected on the last 20 years immersed in electronic music. Carried by his emotional ups and downs, the mix incorporates a verity of tracks along the memory lane…

Be sure to check out bvdub‘s Return To Tonglu (Quietus, 2008), We Were The Sun (Quietus, 2009) and his amazing White Clouds Drift On And On released on echospace [detroit] in 2009 under his real name.