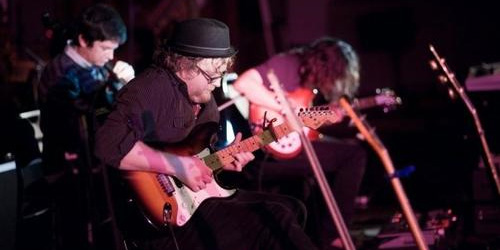 Tell us a bit about the title of the album, “Chasing After Shadows… Living with the Ghosts”. Is there a story behind it?
There is no specific story. It’s a general statement about human existence. Shadows represent reflection but not true reality. We all chase after things that are not real at times. It could be our own perception of ourselves or of the world as a whole. Living with the Ghosts, well I know that neither of us believe in ghosts. We are however haunted by circumstances and events that have happened in our lives. It could be the loss of someone through death or the end of a relationship, etc. Something we never fully recovered from, despite every attempt to do so. We all have our personal symbolic ghosts.

You talk about setting no limitations for “Chasing…”. How does the theme and sound emerge when there are no constraints?
We pretty much went for whatever the song called for. We employed a string section & horns for the first time based on that approach. We’ve always worked with Matt Slocum for cello & did again on this release, but we pushed ourselves a bit further sonically & texturally because the batch of songs we had written called for a somewhat different approach than we were used to.

The video for Breathturn, directed by David Altobelli, is amazing. There’s even a part when the little boy is looking up at the shoes (hmm, a subliminal shoegazing gesture?). The imagery adds a whole new dimension to your music. Tell us about this collaboration.
We’d rather leave the interpretation of the shoes up to the viewers. As for David, he has an incredible talent for imagery & pacing, which, as Hammock listeners know, are key elements to our music. He’s been able to marry a visual component to the music that matches beautifully. We’re hoping to work with him on another video from “Chasing”, depending on how well the album sells.

How did you come about working with Thomas Petillo, and use his photography in the hardback volume?
We’ve known Thomas for a long time. He’s a dear friend. We took photos for Kenotic in Montreal, Quebec. Thomas took photos in Russia for our Stranded EP. We got an RV and travelled through the desert and salt flats of Utah and Nevada for Raising and finally we got another RV and drove through the dirty, haunted south for Chasing. That’s why the book is called North, West, East, South. Thomas is amazing at catching our musical vision with the camera. We have a lot of fun when we travel together.

Your music continues to mature over the years. Can you talk about your personal development as musicians?
We’ve known each other for so long now that our communication process concerning music is very fluid. When ideas are being worked out, we’re able to get down to the absolute best parts without much, if any, friction. It’s nice to work in very low egocentric environment, it makes the creation of music that much more of a joy & it allows you to take bigger chances & go for more creative approaches.

Will we ever see Volume 2 for The Sleep-Over Series?
Maybe……….

On a completely different note;

The flood in Nashville is continuing to have a serious effect on the people here. The Hammock studio was effected slightly, but Marc’s house & entire neighborhood sustained considerable damage. Many more have lost everything & need help desperately. We would like to ask those of you who can to donate your time or money to help those who are truly in need at this turbulent time. There are some excellent resources to check out here: So Nashville Is Flooded… How Can I Help?