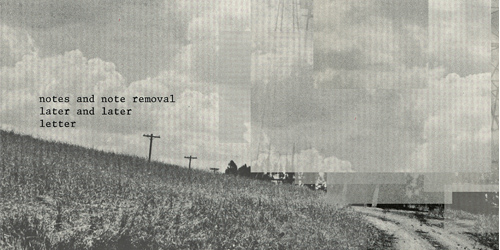 This week we bring you a wonderful selection of modern classical and experimental pieces as compiled by Cole Pierce. Later was originally produced in a unique edition of 60 CDs, featuring a poem by Tyler Carter and packaged with the playlist printed on found paper and were distributed to Cole Pierce’s mix CD mailing list in January of 2010. The ongoing multiples project (since 2004) consists of mixed CDs produced and mailed about twice a year. Cole Pierce is a Chicago based artist making paintings and video installations, holds an MFA in Art Theory & Practice from Northwestern (2007). Check out his work and download more of his mixes at colepierce.com and also at his blog – prestosamo.blogspot.com 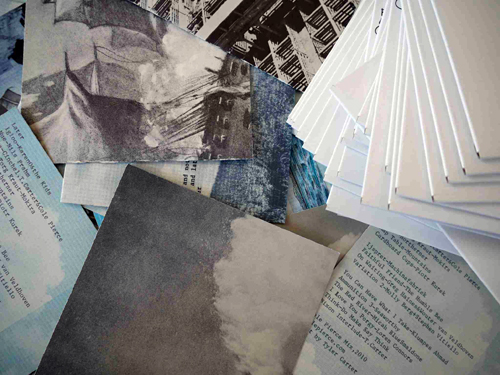 Here’s Cole Pierce, with his reflections on the mix:

Last summer I found four tracks that embodied everything I love about ambient music. I listened to this short 17 minute set repeatedly; Machinefabriek’s guitar over a field recording of ice skaters on a frozen pond, The Humble Bee’s pleasant tones and Greg Haines’ minimal orchestra that shifts to drones, eventually breaking to pieces before transitioning to the casual, incidental tones layered over the sounds of a coffee shop created by Molly Berg + Stephen Vitiello. This set of glitchy ambient music served as the impetus for the track selection and frame of the overall structure. The basic ingredients for the whole mix can be found in the subtleties mentioned in this short set in the middle of Later; which is a genre study in music emphasizing modern classical harmonies and a balance between experimental production techniques. That said, I believe a good mix is one of thoughtful variety and the rest of the tracks transition through multiple genres that can all be described as ambient. Regardless of the instruments used, the pace is gentle, repetitive, even tempered and anticlimactic. Post-rock, modern classical, sublime electronic, field recordings, and spoken word pieces are patched together to provide interesting comparisons and juxtapositions. Nils Frahm plays piano and Mokira plays electronics, yet both are inspired by a Phillip Glass type of sublime meditation. These two tracks are connected by an equally meditative interlude which is a field recording of someone talking to himself during a night hike, calmly identifying his surroundings and admiring the amount of visible stars. 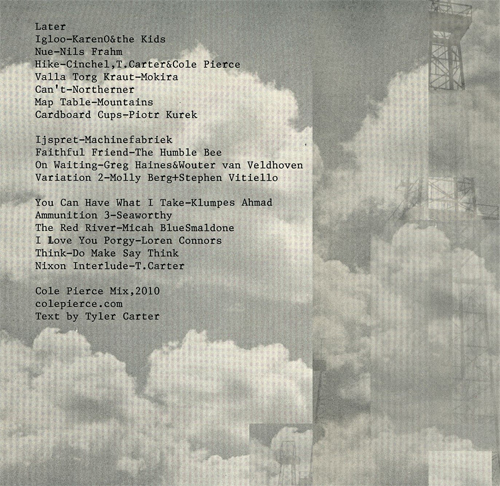 While this podcast is one continuous track, I usually organize my mixes into 3 or 4 sets. I do this so the listener can enter the mix at different points, and provide an option other than the usual linear one hour – beginning to end – mixed CD. It is a personal preference of mine, because I end up inadvertently ignoring the last half of too many mixes and podcasts.