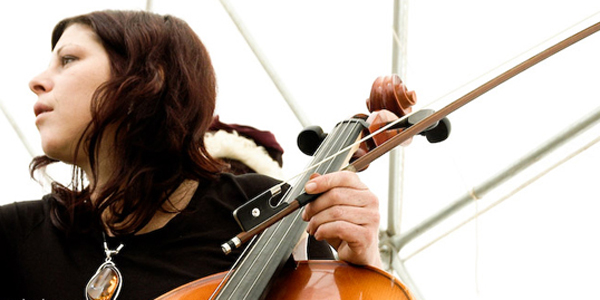 With all that classical cello and violin training, how did you get into synths and producing?
I think it all really began when I was about 14 and started playing with four tracks. I believe I had a little casio keyboard and a 4 track and just slowly worked my way up to digital audio workstations, soft-synths, consoles and outboard gear. For as long as I can remember, I was always looking at ways that I could compose and produce music on my own and to me it has always felt like a natural progression in my search to expand my sonic palette. I have always been as equally fascinated by the technology and development of music as well as studying the craft of perfecting a live instrument so for me studying how to build circuits and mix on a 72 channel console or program a synth in Reaktor or mastering a style on the cello were all working towards the same goal.

The way classical and electronic traditions come together in your music is really like a meeting of equals. It truly blurs the line between genres. Is that a conscious decision? What does each tradition have to offer, in your mind?
I do really enjoy blurring the line of genres and have spent many years trying to prefect that equality or balance in the songs. I think blending electronic and organic is actually a very difficult thing to pull off well and the more the lines are blurred the better. Plus I never really understood the madness with genres to be honest. Half of the genres are the same beat just slowed down or speed up a few BPM. I’d rather look at a track in the mindset of, does that song make me feel, does it tell the story and paint a picture or does it just make me nod my head etc..

Indra’s Web is a Buddhist concept about the interconnectedness of all things. Is your choice of this metaphor for your album a reflection of your own beliefs?
The philosophy I think is a beautiful metaphor just as most philosophies are. There is a lot to be said however, for how intricately our world is interconnected. There are many philosophies based on this idea including grand Mother Spider which is a Native American philosophy. New advances in quantum physics and science are showing us a similar concept as well including the holographic universe, fractal theory and the butterfly effect. So to answer your question, on some level yes this is a part of my belief structure but I equally believe that getting attached to any one idea is bad and that the moment humans get attached to any dogma or religion we have missed the point entirely.  Plus, I think the concept just really lends itself towards great art…

The album is released on your own label, Cartesian Binary Recordings. First of all, what does that intriguing name represent? And why did you decide to start your own label?
I started the label for many reasons, most importantly to have fewer people between me and my fans gobbling up the funds as well as complete artistic freedom but also to develop stronger relations in the licensing world for games and film. The music business is changing every second and it’s important these days if an artist wants to survive that they must have a very strong business mindset as well as an artistic one as well. Long gone are the days of getting “signed” and making it. However, if you have a smart business model and really go for it as an individual, you can actually make it work. As for the name of the label, it really has two meanings. Cartesian as in cartesian coordinate system which is basically an x/y grid. This idea was playing on the concept that math and music are interchangeable and that music is math and vice versa. Then the other play on Cartesian is the Cartesian Philosophy or dualism The word “Cartesius” is the latin form of the name Descartes. Cartesian dualism is simply Descartes concept of dualism “cogito ergo sum” “I think therefore I am”. In this philosophy he reasons the body can be divided into parts but that the mind and soul are indivisible.

Any projects in the works? What can we expect from you in the future?
At the moment, I am working on a new EP for Spring 2010 as well as some new releases for the label including a remix CD and a compilation and hopefully will also be releasing other artists on my label in the future. There’s also a few random quest appearances on strings I am working on right now with a handful of producers and a small tour in the works.