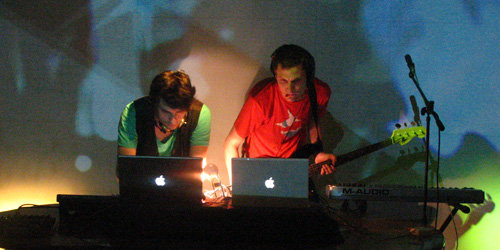 The story about how you came to land on n5MD is kind of like an Internet fairytale, isn‘t it?
It definitely was like a fairytale for us because we hadn’t even started looking for a label to release our music. We thought that would be the biggest task. But by pure luck we added Mike Cadoo’s (n5MD label owner) wife as a friend on Myspace and she happened to check out our profile at the right moment so Mike heard it. He then contacted us and soon thereafter we signed a contract with him. For us, that has been the most amazing thing in the short time that Plastik Joy has been in operation because Mike is really easy going and wants all the best for his artists.

What is your musical past? Had either of you been in bands before?
We definitely come from different musical pasts. I started a couple of garage indie rock bands with friends back in Iceland where I played bass but we lacked time and ambition to take it anywhere further.

Cristiano, on the other hand, was part of a well known local electro-rock band back in his hometown in Italy where he took care of the electronic beats and sequences. His role in the band then changed and he found himself being the guy who pressed play to launch the sequences and pretended to be doing something. He didn’t like that so he left the band. He also had a second project here in Barcelona with an Italian friend, making ambient experimental electronic music. But communication problems and a lack of spontaneity brought that project to an abrupt end.

Plastik Joy really does sound like a full band, with its mix of acoustic and electric instruments, subtle programming and vocals. How do you divide responsibilities between you? And how does it work out live?
In the studio we work in perfect harmony. I’m usually in charge of the acoustic parts – guitars, bass, keyboards and sometimes vocals – while Cristiano takes care of the more complicated stuff – heavy duty drum programming, editing, arrangement, mixing and also some guitar arpeggios. We play and program almost all the instruments on the album, which is quite easy to do in the comfort of your own studio. But adjusting these arrangements to a two-man live show was a nightmare.

First of all, we decided to use as little preprogrammed material as possible since we didn’t like the idea of doing a ‘live dj set’. That led us to our current setup in Ableton Live which took us weeks to prepare. I have a midi keyboard and a midi foot controller connected to my laptop. I use the two inputs on my sound card to connect a mic and an electric bass. So basically what I do is get midi sync from Cristiano’s laptop and record material live and use the foot controller to create clips and then launch them. This system enables me on some songs to play bass, electric and acoustic piano and – on top of that – sing, which would otherwise be impossible.

Cristiano wound up as the designated guitarist. He has a Novation midi controller that enables him to control rhythmic parts, sequences and effects. On his sound card, he uses one input for the electric guitar and plays various guitar parts that he records and launches. The other input is connected to the mixer so he can resample anything that comes from there.

There‘s a special story behind the song “barcelona – reykjavík [FHE276]”. Can you share it with us?
In 2008, my grandfather passed away and I flew to Iceland to attend the funeral. I started writing the song on the plane and wound up with a rough song structure. When we were choosing the tracks for the album, I really wanted this track to be on it, but since it was far from finished it didn’t look like it was going to happen. We tried countless times to get the track to sound the way we wanted but without success. A friend of Cristiano’s suggested that we send the track to a guy living in Sweden to see if he could write some lyrics and a melody for us. We did and a couple of weeks later he sent us the results and the track just fell into place. It ended up being one of the happiest and ‘poppiest’ tracks on the album, and I like it because I know my grandfather wouldn’t have liked to have had a sad song dedicated to him.

Where does Plastik Joy go from here?
The last year-and-a-half has been spent inside the studio so we’re currently looking for a booking agency to be able to break out of the boundaries of Spain and go off to play venues around the world.

How did you settle on the musical direction you’ve taken, the dreamy downtempo vibe? Was it a conscious decision? What were you aiming for?
We didn’t really settle on anything, I think the reason for the dreamy downtempo vibe is the way that we made this album. Almost all the recording sessions were totally free of stress. We would meet up at Cristiano’s home studio and make a nice dinner, have a glass of red wine and then sit in front of the computer and start building tracks. Our more recent musical ideas have been born during live show rehearsals, so the result is a faster BPM and a rougher sound.