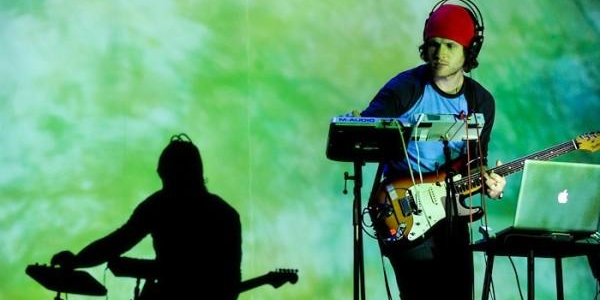 What are you working on these days?
I’m working on a bunch of things, very exciting times right now. 1st priority is putting the final touches on a new solo album. I’m also working on some new live releases, a bunch of video and photography work, a new North Valley Subconscious Orchestra record with Brad Laner, a new record with Taylor Deupree, final mixes of the new Flossin LP. I’m also writing new ideas for upcoming “What you talkin bout Willits” XLR8R TV episodes, and some other things that I should probably wait to talk about. In general, I feel like I’m living the most fun and creative life I can possibly imagine right now. Loving life. I feel like I’ve built a solid foundation over the last 8 years or so and now I’m really getting started.

Anything else?
I’m also working on Overlap.org a bunch. we have some great releases on the way. “Raster-Noton live at Listen/Vision” is out in August, and we’ve built things up so people can share their experimental work with each through the site. It’s all going to keep growing, the diverse community is emerging. I’m also working on and testing out Max for Live a lot, and working on new ways to perform with the tools I use.

How different is your live performance and the pieces you showcased tonight vs. what’s going to end up on your final album.
Tonight you heard one piece that will be on the next LP, just a different expression or version of it. The one with the looped dry riff and polyrhythms building. I can make that one happen live, playing solo. Other things that i’m working on in the studio will require some creative remixing or other performers to make it really come to life in a live setting. and that’s cool with me. I just let my imagination express itself and then work out ways to improvise with it live. Or, I just play what i feel and not worry about reproducing anything on a record, and make new and unique experiences for the audience.

Do you have a label in mind for your new record?
A plan is not locked down yet. I’m deciding where the best home for it is based on when I want it to be released and how it feels to the vibe of the music. Regardless of who releases it, I want that process to be in tight harmony with the music and images. It’s the most diverse release that I’ve made so far. I’m really feeling it. Very excited to share !

Are you looking for a different medium type, or just the way you manage the recording?
I’m rethinking everything I’m doing from the roots up. The traditional routes of music business and digital distribution seemed to get pretty dated in 2009. We’re in some new times and there are new ways to sustain.

So what do you think about digital distribution vs. purely limited physical releases?
I would love to do it all. I think it’s important to have multiple points of entry for everyone. Have videos, have multiple format audio files, have vinyl, a limited run of CDs, or specific tour CDs/DVDs. I’m into anything and everything that’s going to help and sustain the process organically. Finding honest and creative ways to monetize all that i do. But more than money, it’s about finding ways that give people access into the work and vibration, so we can build community and do great things together.

If someone wants to download an album of yours for free, perhaps illegally, is that ok with you ?
I def don’t think they should feel guilty about it, haha. But it’s also good to be conscious of the cycle of giving and receiving. We need to support artists by buying things and helping to spread the word to others. It’s a form of trade and appreciation that we need to respect. I trust that although you could probably find any of my work online for free, the community will give back with money to help me sustain the creative process, eat, and pay for my gear. In the end, I’m making this stuff to bring people together and share this vibration that we’re in. It’s a responsibility to the visions, and the information and energy I have to offer this world.

I hate classifying music in general, because that’s the toughest thing to do, so instead I’ll ask, what do you describe your music to your parents?
haha ! Well, my parents get it, so I don’t need to do any explaining to them. My parents are huge music fans, and their taste in cool stuff catalyzed a lot in my consciousness at a young age. But, yeah… explaining what i do in a word is difficult. I usually explain what it is and keep it as simple as possible. Something like : “i make patterns with harmonic string vibrations and synchronized images.” haha. Or, just saying “beautiful experimental music and images” can be sufficient at times. I feel like I have finally come to terms with the word “experimental”. It’s a keyword related to a broad category, but it’s also specific in that it’s not “normal stuff”. It doesn’t really mean anything, which is the cool in the world of genre categories.

Talk about the importance of giving the people something to look at when you’re performing.
A lot of the work i’m making right now is audiovisual. The sound and image are woven into each other, so it’s important to have the full experience happening live. But I don’t think it’s important to give people something to look at unless the images and sound are related to each other. It’s an interesting thing to play with and be aware of.. I mean, even if I did not use any live video, my body and the guitar itself is something people are looking at. I’m playing, and people can see and hear the process of the guitar being sampled, and becoming other shapes. Something is happening. I’m aware of that visually, but I definitely don’t get wrapped up in it by intentionally trying to make it more of a “performance” and cheesing around. I want to make the patterns and vibrations that I’m hearing in my body, and express/voice that live. The way I look while doing that is just me, so the visual component, the performance and the video I use, is woven into the experience.

Going back to your created patches and your demonstrations on Max/MSP. Are you going to be releasing some of your patches to the public?
I want to find more cool ways to do it. I’ve been sharing a lot of the information through these “What You Talkin Bout Willits” videos, and for one episode my friend Brian Schmeirer and I made these max patches that connect with the iPhone to Max and Live, for free download. That was fun, and I’ll be getting some of my custom made things out there at some point, but I want to figure out the best way to do this, especially with Max For Live on it’s way to people pretty soon.

What do you think of how technology has changed your life, specifically with the music that you write, and where do you think it’s going to be in five years?
At the root of it all, computers provide me with memory that i can access in nonlinear ways. That is absolutely amazing and crucial to the sounds I love to hear. I could be content playing acoustic guitar for the rest of my life, but computers have opened up so much expression of my imagination. In the future, I see technology interfacing with our bodies more. I think it’s becoming more organic. I think the mediation between the mouse, the screen, the eyes, the hands, is going to start to dissolve a bit more. I’m looking forward to it.