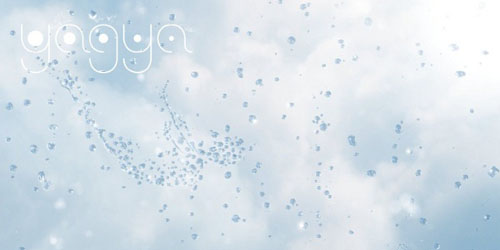 Tell us about your process of recording rain, city sounds, and nature atmospherics.
I didn’t record the atmospheres myself. I’m actually rather surprised that some people think that. I think people who have lived in Iceland hear that right away/from the start -it doesn’t sound like Icelandic rain. We have no thunder here, for example. The idea came up to record Icelandic atmospheres, but I preferred that the sounds came from all over the world. If you listen closely, the languages of the people in the background are not Icelandic, I actually don’t know what languages they are speaking. But it doesn’t matter, because it’s just people talking, and just like the sound of rain, everybody can relate to it no matter where they are from. So the fact that the rain isn’t Icelandic, but from all over the world, intrigues me.

I would claim that Rigning is very melancholic in nature. Is there a specific story behind the album?
There is no specific story, I just like gloomy things. Sadness is beautiful. But I didn’t set out to make a sad album, or anything like that, I think I just did it unconsciously. It’s an emotion that moves me, and it’s easier to listen to soft, sad music for a long time (when i’m creating it for instance) than soft, happy music. Happy music is usually not as deep, and I loose interest rather quickly. Angry or hard music isn’t very constructive, and I get tired after a while. It’s rather hard to talk about this all because I don’t think about my music in words, more like sounds, mental images and feelings. I find the technical side of music making very interesting and I’m always trying to learn new things, but I’ve found that you can’t really talk about the emotional side without sounding pretentious or just plain weird.

What are your thoughts on a conceptual albums, and would you say that the tracks on Rigning must be played in sequence?
I like conceptual albums for sure. I think albums are just like long tracks, with many parts and should have a certain mood and feeling, perhaps even tell a story. I find epic and complex things fascinating, with many details and layers and different ideas all coming to gather to create one great whole. I usually listen to albums repeatedly, without skipping tracks, and usually i don’t have favorite tracks on specific albums. So when all the tracks are based on the same idea or mood, then I’m usually happy and can listen forever. But you don’t have to play the tracks on Rigning in the order I chose. I wouldn’t dare trying to tell the listener what to do with my music anyway, it’s all out of my hands now. The vinyl version doesn’t have all the tracks on the CD, so there you kind of have a different order. But it’s rather hard to make a new order since the tracks are all mixed together, it would sound strange.

What are your thoughts on evolution of minimal / ambient /dub-techno and that “Basic-Channel sound”?
Well, to tell the truth, I don’t follow minimal techno closely. It doesn’t find it’s way onto my phone (mp3 player), but I do check out some interesting artists that my friends point out to me. I can appreciate good dub-techno, and I enjoy listening to it once in a while, but not repeatedly. I think it’s a little bit stuck in the past sometimes, but isn’t that true about almost all music styles? People are always mimicking the good old times (myself included!). I don’t think rock & roll has evolved a lot over the decades, even though it has been the foundation for other styles. Me and my friends used to joke about that when we were trying to copy some style we liked, and failing to do so, we produced something new and original by accident. So I think the old timers continue to make what they know best, like minimal techno, and the the teenagers invent new music styles while learning from the old producers. And then they become old timers and the cycle starts over.