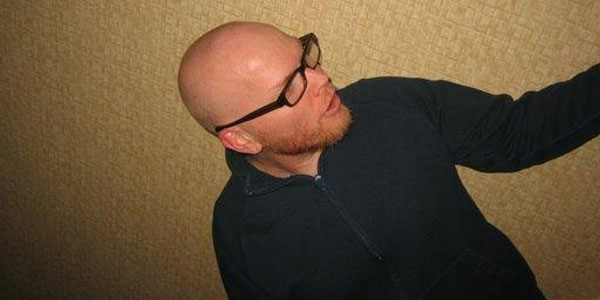 I have to ask – what made you choose your moniker?
When I chose “Another Electronic Musician” as my moniker the number of bedroom composers (or under the stairs for me) within the electronic music community was growing rapidly. My intention was to communicate that, yes, I was yet another electronic musician, but that, in openly stating so, I would eliminate any potential negative connotations associated with beginning as a bedroom composer, and have my music taken at face value.  Unfortunately my moniker has been seen as a means of self deprecation, which was not its intent.

Five is an interesting departure, or perhaps just a side step, from your previous works. Can you tell us more about your decisions of producing a more dance oriented album?
Five was written during a good period in my life.  I was happy and having fun and I think it came through.  I wanted to communicate the uplifting feelings of love from my family and friends I was experiencing.  The dance aspect was a result of this, I wanted people to have fun while listening to it. I do not view Five as a departure from my previous releases. I think it is a progression and contains what I learned during the writing of Use and Patience.  Just as a person evolves over time, I feel my releases have evolved.  It may not be the smartest business move, but I approach writing music as a learning experience and what I write at any particular time is what I feel I need to explore more deeply.

Being just another electronic musician, I imagine you producing on your laptop in your bedroom. What is your current hardware/software setup like?
The days of writing under the stairs are long gone.  I currently have a studio where I do most of my writing.  I do, however, use my laptop to capture ideas whenever they happen. My current setup – Computer: Intel Core2 Quad Q6600, 4gb RAM, 3 each 500gb HD, WinXP; Audio Cards: 4 each Echo Audio Layla 24/96; Hard Synths/Effects: Roland Space Echo RE-101, Roland Space Echo RE-201, Roland JX-8P, Roland SH-32, Nord Modular, Yamaha TX7, Waldorf Blofeld, Waldorf MicroWave XT, Korg MS2000R,  Digitech S-100, Electrix Warp Factory; Soft Synths/DAW: Ableton Live, Native Instruments, Various Other Synths/Effects…

Do you think we should retire the IDM genre, at least in its definition or the acronym? Perhaps we should call it something else?
I do not pay attention to genres.  I am probably the worst person to ask about what music is commonly classified in what genre and whether it is appropriate.  Five has been classified by some as IDM, Dub, Lounge, while Patience was Glitch, Ambient, Dub and Use was Minimal, Glitch, Ambient, IDM it all makes no difference to me.

How do you describe your music to your parents?
I have explained my music to my parents as experimental electronic music which is made on a computer.  Anything more specific than that would be out of context for them.  They have always been very supportive of my music.  Five was the first album that they were able to ‘understand’ and apparently it is something that they play for their friends.  That makes me feel good.