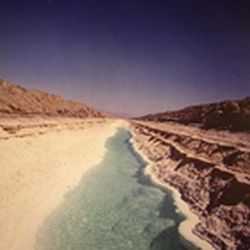 Currently residing in Berlin, Vainio is a prominent member of the acclaimed Pan Sonic duo (with Ilpo Väisänen). And besides his more established minimalist alias, Ø (pronounced “ohm”), he has also released under Kentolevi, Tekonivel, and Philus monikers – check out the Kolmio EP on Sähkö for the latter.

Speaking of the label. Helsinki based Sähkö (which stands for “electricity” in Finnish) has built up a respectable catalog of abstract, minimal, and experimental releases since its launch in 1993 [same year that Detroit’s Basic Channel was launched]. These are mostly featuring the output of various projects by Vainio and Väisänen, with an occasional release by Jimi Tenor, and a 12″ by Mike Ink (Wolfgang Voigt). It also manages a handful of sub-labels which include Jazzpuu, Keys Of Life, and Puu (means “wood”).

But back to Oleva (“The Existing”) which features the familiar signature of Vainio’s style of digital wire hum, low rumbling saw-tooth distortions, dark industrial stabs, and pounding minimal beats. Although the album features a few purely ambient tracks, as well as a couple of abstract drony explorations, the proliferation of tight rhythmic components make this release a more headphone oriented experience [as opposed to an archive of an experimental audio installations]. Oleva is is an ongoing exploration into noise and silence alike. Yet another excellent addition for the avid minimalist collector.

It’s delightful to see that Sähkö keeps on printing just the quality stuff. Make sure you are well familiar with Ø’s classic Metri (Sähkö, 1994). Recommended if you love Gas, Autechre, anything from Basic Channel, and of course Pan Sonic.