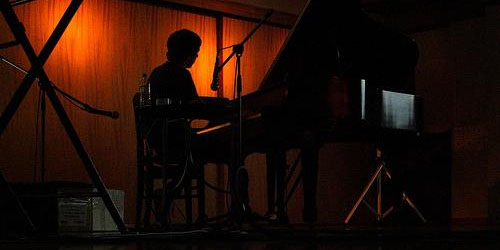 There is a melancholic tone in your music. Do you think there is a specific reason why you identify with sadness?
i think it’s easier to make music when feeling a bit sad or melancholic and to make good music when expressing those feelings. i think there’s been some happier songs on the two latest albums and on the fragment ep though. i wouldn’t say i identify with sadness. i just try to express whatever i feel at the moment of making music, and when i’m feeling really happy i usually do other things then making music i guess.

What instruments do you play, and which one is your favorite?
i only play the piano. i do love the sounds of strings as well and i wish i could play that.

What are some of your memorable moments from working with Peter Broderick on the album?
the songs i’ve worked with peter on where results of sending piano bits for him to add instruments too so we didn’t actually meet in person when making those songs. peter is so easy to work with though. you get the song back very quick and you feel so happy with what he’s done to it. the album wouldn’t sound as good with out him. the same thing can be said about danny norbury who played cello on the latest album and also was a part of the short album called sketches.

Do you think if emptiness had a sound, it would be better conveyed in multiple parts?
i’d like to think it has a sound. however emptiness could sound very different to you than it does to me. 🙂