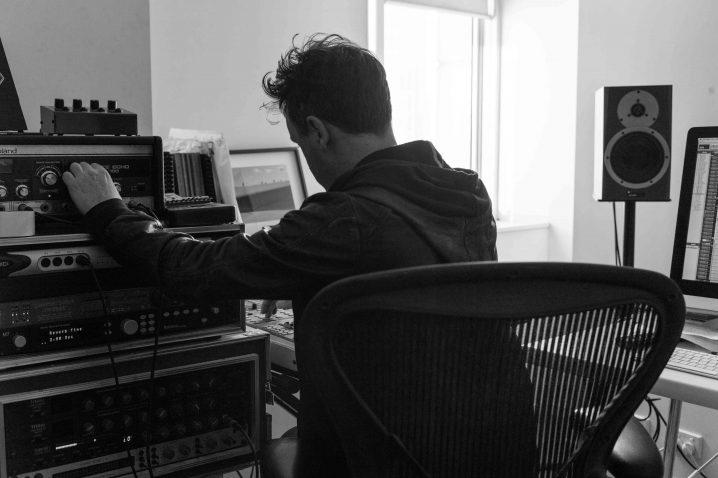 Luke Howard was on of my great 2013 discoveries. This Australian musician appeared on the scene via his self-released debut, titled Sun, Cloud, and immediately captured my heart, and a deserved spot on Headphone Commute’s Best of 2013 list, Music For Watching The Snow Slowly Fall In The Moonlight, along the likes of Eluvium, Lubomyr Melnyk, Nils Frahm, Fabrizio Paterlini, Ludovico Einaudi, and many other gorgeous modern classical works. Today we take a look at this pianist’s studio setup, to discover more about the process and the tools. Enjoy!

Lets start at the very beginning. Can you tell us how you got involved in composing, and what was your very first piece of gear?
I’ve been playing the piano since I was quite young and I started writing music around that time too, although my first composition (whilst unintentionally bitonal) wouldn’t pass much muster now. At school I played in various bands and musicals, then did the jazz course at the Victorian College of the Arts in Melbourne. I spent a lot of time obsessed with Bud Powell, Keith Jarrett and Brad Mehldau before deciding my interests lay (mostly) elsewhere. I was quite fortunate that my high school had an electronic music program, which was quite forward thinking for the time. They would lend me their Ensoniq ESQ-1, Roland D-5, Atari 1040ST and four track over the school holidays, so I suppose I had an early introduction there.

How many different studio iterations have you gone through, and what does your final setup look like right now?
It’s gone through a few iterations, but pretty much it has always been based around a Mac running Pro Tools. Pro Tools is not the most intuitive or creative environment but it’s the one I’m most familiar with. If I was starting now I guess I would just use Ableton or maybe Logic because they probably make more sense for composition. Pro Tools’ ubiquity is useful, though, as the last records have been made in several different studios, and session portability saves a bit of time. I have a bunch of Crane Song and Dave Hill gear which I love, some Coles and Schoeps microphones, a couple of hardware reverbs, a Space Echo, and a few other bits and pieces. I tend to subscribe to the “buy cheap, buy twice” school of thought, so I try not to buy anything unless I plan to keep it for a long time. Having said that, I’m mostly in the box and I spend more time at the piano or with Sibelius (music notation software) than in the audio world. 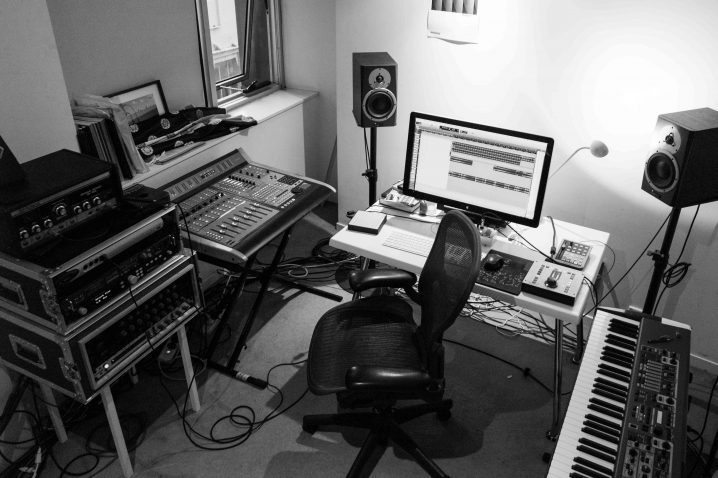 Tell us about your favorite piece of hardware.
Well, aside from my piano, it would probably be the Bricasti M7. My youthful ECM obsession has manifested itself in reverb lust (surely there is a compound German word for that). I’ve been fortunate to work with Jan Erik Kongshaug a few times and I’m always trying to steal his reverb settings! Anyway, the Bricasti is the reverb that doesn’t sound like reverb, it just sounds like a room. Ironically it is sometimes too transparent. It is a magical bit of hardware. I’m also very fond of the old Digidesign ProControl, it feels so much better built than the stuff Avid make now, and they’re quite cheap on the second hand market. Unfortunately (but not surprisingly) it is no longer supported by Pro Tools.

And what about the software that you use for production?
Because most of my music is to be played by humans, I use Sibelius (and paper!) a lot. In the production world, there are many plugins I love: all of the SoundToys stuff (particularly EchoBoy and Decapitator), GRM Tools, Steven Massey’s inexpensive but great Pro Tools plugins, Crane Song Phoenix, and Relab’s LX480 reverb. The latter is by far my favourite plugin reverb and actually the only one I use. I think SoundToys Decapitator was on the master buss of all of “Sun, Cloud”. Michael Norris’ plugins are quite special, as are some of the Universal Audio ones. Having said all of that, I try to restrict myself to a small number of tools (to avoid choice paralysis), and also most of my records are mixed by Hadyn Buxton and usually the first thing he does it clear my settings! 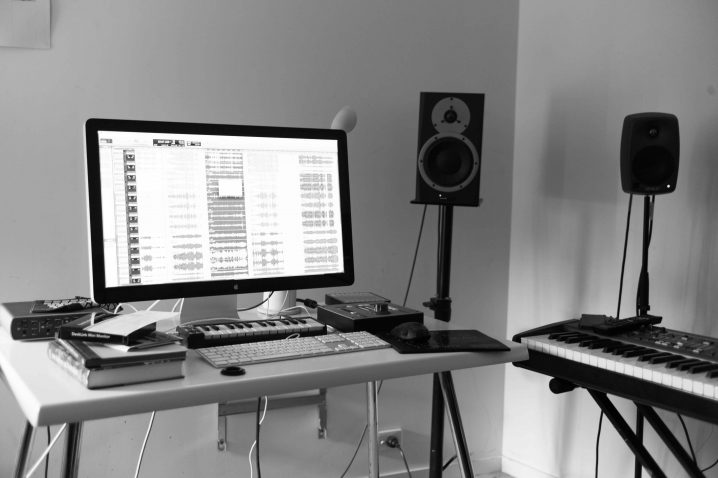 Is there a particular piece of gear that you’re just dying to get your hands on and do you think one day you’ll have it?
Of course I go through periods of wanting this or that but honestly, I suspect I’ve already more than I need – particularly given I’m often travelling anyway. Being at home is comfortable and it’s great to have everything at hand, but when away the laptop more than suffices, which probably says something. I’m not sure I’ve found quite the perfect set of monitors yet: I have these Spiral Groove Studio Ones (not shown), which sound very accurate, but I miss the low end. And a better piano would be nice but, as with the speakers, these investments would first require a bigger room.

What does your live setup look like, and what do you bring with you when you travel for an extensive tour?
I haven’t yet done an “extensive” tour, unless you’re counting the long flight from Australia as the extensive bit! Anyway, it will come as no surprise that I use Ableton Live. I have a Monome to trigger the clips and the smaller Akai controllers for knob twiddling and playing. I am curious about the Livid Code, it looks as if it could replace a bunch of things. Most of the stuff I trigger I just bounce out of the original session (without reverb, so I can adjust to the room), but there are a few more involved chains. Back home my friend Mike Katz handles laptop duties, which is great as I can focus on the piano and engaging with the audience, rather than looking like I am checking my e-mail (which I probably am doing anyway). 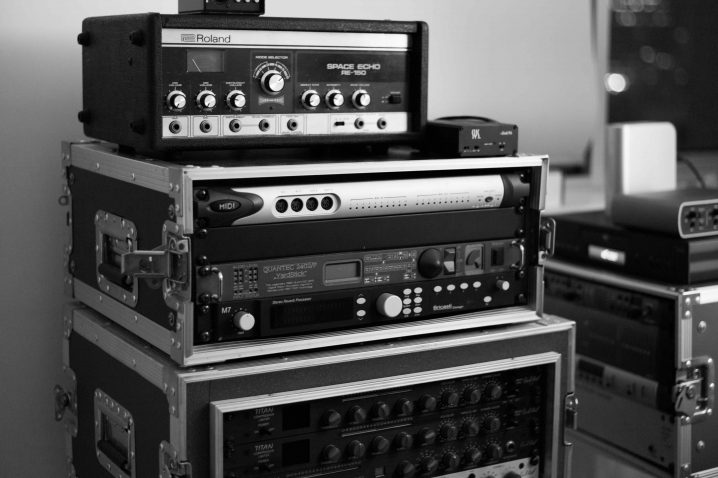 What is the most important environmental aspect of your current workspace and what would be a particular element that you would improve on?
The best aspect of my current workspace is that it’s in its own room (actually, my bedroom; I sleep in the living room) and so there is some separation; when I go in there, it’s to make music. Pretty much everything else about it is far from ideal: it’s really difficult to work in during the Australian summer because it gets so hot, and it’s quite unergonomic and cluttered. Unfortunately Melbourne is not Berlin and finding studio spaces that are affordable, roomy and central is quite difficult. One day I would love to create an environment that captures the calm of my favourite studios, Greenhouse (in Reykajvík) and Rainbow (in Oslo). Those places remind me how much on an impact one’s environment has on mood and productivity. My ideal place would be a really big, treated room, with the absolute minimum of gear in it!

What can you tell us about your overall process of composition? How are the ideas born, where do they mature, and when do they finally see the light?
I have a few approaches and I’m always keen to find more so I’m not endlessly rewriting the same piece! A lot of music, say, on “Sun, Cloud” started as piano improvisations that I recorded sketches of and then transcribed and orchestrated. I have this sort of strange faith in improvisation and the subconscious: I will often leave these pieces unedited. “Portrait Gallery” was an improvisation I recorded one night with my Mbox, it wasn’t intended for release. Another approach, which I used for a piece I’m finishing at the moment, is to improvise for say half an hour or an hour, chop and rearrange it, and then transcribe the good bits. I generally do the transcription by ear and not from MIDI as otherwise I spend more time cleaning it up and in transcribing I tend to process the ideas a bit too. Then I will spend a lot of time editing it further in Sibelius, trying to place things without destroying the original idea. Other times, it’s just at the piano with some manuscript; I keep a notebook and also a bunch of crappy phone recordings of unfinished ideas for future mining. I often think of ideas at sound checks when I’m in front of a piano but otherwise distracted, so being able to record into the phone is really useful. A lot of my music is social in the sense that I like to write for my friends, often to get them to collaborate in ways that they otherwise wouldn’t. The electronic textures, I’m just generally mucking around, it is not particularly informed although I am starting to find things I like. In the future I would like to compose more music that hangs on some external narrative, be it a book or a poem or a film, even if this is not disclosed to the listener; I think that would help break some habits. 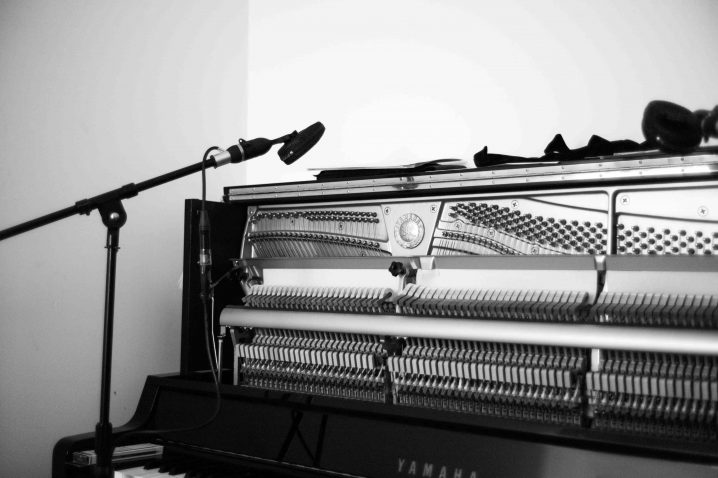 After the piece is complete, how do you audition the results? What are your reactions to hearing your music in a different context, setting, or a sound system?
It’s always interesting to hear music you’ve worked on in a different context but it doesn’t happen all too often, maybe because I don’t drive! Mostly it’s home or laptop speakers. I don’t really like hearing my music as background music, I’d rather not listen to it that way (although I’m less concerned if others do).

Do you ever procrastinate? If so, what do you usually find yourself doing during those times?
I am a terrible procrastinator, or should I say, I am easily distracted. I don’t have a television but the internet easily takes its place. The problem is always overcoming the inertia of starting a project or a piece, once started usually the momentum carries you most of the way. Often I go to the library to work, being in the company of others helps a bit, as does having a routine. But yes, like most of us self-employed folk with flexible deadlines, it is a constant battle. Please keep asking this question as the answers are always enlightening! 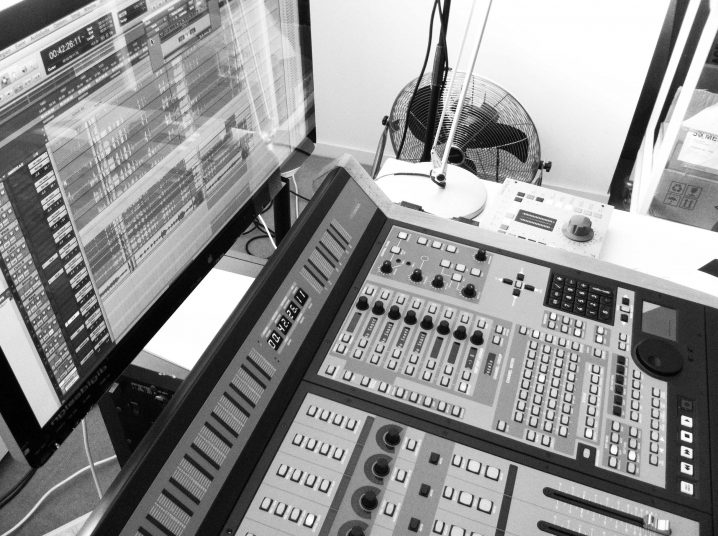 Be sure to check out Headphone Commute’s review of Sun, Cloud