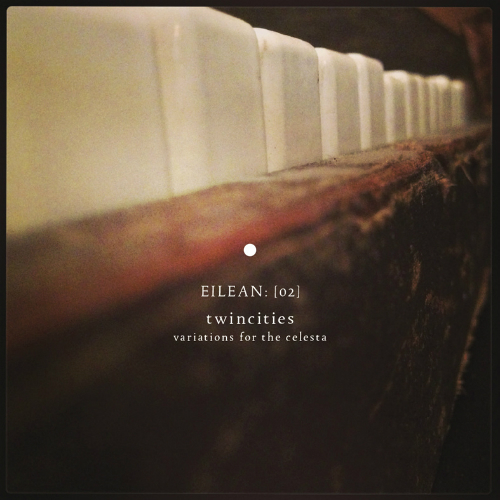 Variations for the Celesta by Twincities, the project of Long Island, NY sound artist Fletcher McDermott, is a delightfully enigmatic record for an enigmatic label. They each succeed in fully engaging not just the ears of the listener, but the mind and the imagination, as the most satisfying artistic endeavors do. While earlier incarnations of Twincities incorporated multiple musicians and forayed across the genres of ambient, noise, and post rock, Variations for the Celesta is the sole work of McDermott and is a stunning sonic exploration of the seemingly endless possibilities offered by one simple instrument.

McDermott describes the album as

“ten pieces based around small recordings of celesta. these ten short sketches were recorded directly to my phone on my living room floor in December of 2012. since then those recordings have been turned into the finished pieces found on this album. though guitars, voices and pianos do find their way on here, the majority of the sound is still just simple celesta sounds, stretched and modified in different ways.”

Just a few seconds into the opening track, ‘prelude in E major’ the listener realizes just how stretched and modified the sounds are going to be. This is nothing like the instrument that renders the twinkling sounds of ‘Dance of the Sugar Plum Fairy’. Instead there are humming drones and variety of clicks, clangs, scratches, and whirs. Perhaps the most apt analogy, which the cover art for the album subtly intimates, is macro photography where ordinary subjects are rendered into captivating otherworldly objects. It is as if a rabbit hole into a new musical world is being opened.

Some of the pieces in this sonic wonderland are breathtakingly beautiful, such as the second track, ‘evenings wait; the morning’s break’ or, deeper into the album, ‘the weight of the frost on a branch’. Others are slightly more experimental, but still alluring, such as ‘early ferns’ or ‘the sun looks quite ghostly when there’s a mist on the river and everything is quiet’. Some of the tracks reference material objects such as ‘faint whirs of the smallest motor’ or the highly evocative ‘a ships bell (sings)’.

On his social media profile, McDermott describes his goal with Twincities saying “i want to make things that sound like beautiful music being played through a broken radio just a little too far away.” Perhaps no track exemplifies that aesthetic better than ‘and the guitar plays war hymns’. The album then concludes its remarkable journey with a piece simply called ‘(sings)’. As if it were not beguiling enough on its own, Variations for the Celesta fits into the vision of the Eilean Rec. label, founded by Mathias Van Eecloo (a.k.a. Monolyth & Cobalt) on a unique and creative concept:

“The concept of this label is based on the map of an imaginary land, a new continent with 100 points on it, as the framework. Each release is associated to a point on this map. Each music artists choose a number between 1 and 100, and it give a place on the map. Each release will fill an area on the map around one point, giving it colors, relief, details. The music artist creates a new region, a new area in the Eilean map, a new vision. He gives his contribution, an imprint to the island…Each album has the corresponding part of the map with the number inside the CD release, and like a puzzle, by the end of the project, all the inside cards side by side on a wall will show the complete Eilean Records map.”

If Variations for the Celesta is any indication, the Eilean land is going to be a very magical place indeed. The album is available as a digital download from both the Twincities and Eilean Bandcamp sites. Very limited handmade editions have been made and some can still be ordered directly from Fluid Radio.