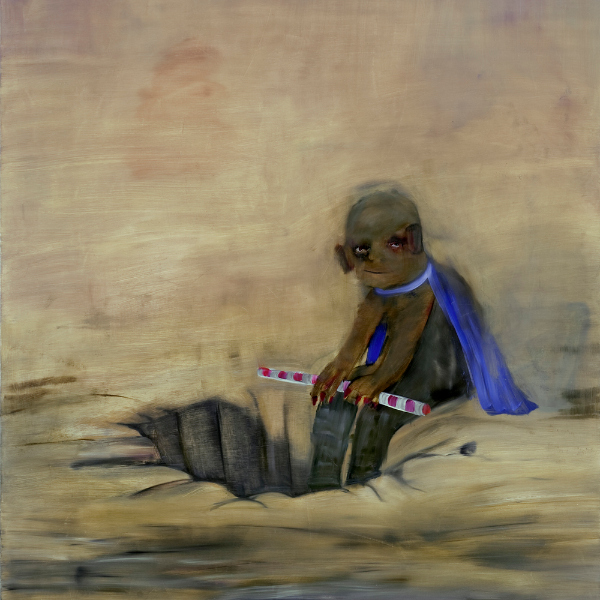 I’m afraid of listening to Kaboom Karavan during the day, because I don’t want the light to seep into the music and ruin the mood. The setting must be grim, damp and arcane; the air a bit stuffy and moist, to better transmit the vibrations; the smells slightly dusty, as that of occult. I’m afraid of listening to Kaboom Karavan during the night, because I don’t want my arcane fantasies to materialize into the metaphysical voices that carry this song. I must leave the door just a little bit open, so that I can escape at the last moment, lest the dreams become real. So finally I find the right moment, and just close my eyes. This way, the thin veil of reality is just outside my trembling lids.

Bram Bosteel‘s Kaboom Karavan project first appeared on my rotations in 2011, when the beloved Miasmah released the second record, Barra Barra. Bosteel first entered the scene of experimental music with the digital-only Short Walk With Olaf debut back in 2007 on Umor Rex, which finally got the deserved pressing on vinyl by the very same Miasmah that offers this gorgeous release. Hokus Fokus is indeed an exotic record, full of dark sounds and creepy acoustic instrumentation that make up this surreal genre that I call noir-fi. Like a soundtrack to some slightly deranged theatrical performance, the score paints abstract images and gray atmospheres of dancing apparition that cry to be brought back into this world. But this place is not scary, it’s just somewhat unhinged.

Listening to Hokus Fokus feels like staring frozenly into a postcard sent from your long-lost uncle that went missing in the Amazon after an expedition gone-wrong (circa year 1935). Merge this image with the decaying sounds of an old Tom Waitz record slowly tuning out in the background and you’re getting close.

My earlier references to stage music are not accidental. Belgium based Bosteel has background in film, theater and contemporary dance. In the past he has collaborated with his landsman Pepijn Caudron, who under his Kreng moniker has also delighted our ears with hair raising motifs. Hokus Fokus maintains a fascinating, glamorous and peculiar feel throughout the record, with nods to the sounds of night-time carnival, strange vaudeville, and avant garde cabaret. Highly recommended for fans of Gultskra Artikler, Svarte Greiner, and Juv.

p.s. During a record listening session with my 11-year-old niece, I asked her to pick out an album and tell me what she sees on the cover and hears in the music. She picked Kaboom Karavan and this is what she said: “The cover looks like a monkey, or dwarf black person, who has cancer, it’s a girl because of painted nails, and is seriously into capes and she plays a flute and sits on top of holes. The music is creepy, but it’s also cool, there are sounds like taxi, flute, and a doorbell. So all over the place. It’s definitely in the night, because it sounds dark: I hear owls, and it sounds like people creeping up on each other, and a christian chorus.”