Let’s start at the very beginning. Can you tell us how you get involved in composing and what was your first very piece of gear?
My first piece of gear was a Sonor Drumkit. I started out as a drummer in bands when I was 15. But I guess even earlier than this my sister had this Bontempi System 5 Plus Keyboard, which I sort of stole from her. Years later, I would go on and use this on many of my tracks, including Hard to Find from my debut album in 2009. So technically that was my first piece of gear, but it wasn’t really mine and I didn’t use it until years later.

How many different studio iterations have you gone through, and what does your final setup look like right now?
Many. Started with a Desktop Computer, Fruity Loops, and two shitty Monitors (really just PC computer speakers). That was around 1999. Around 2007 I had a proper studio which I co-owned with my bandmates back in Berlin. We had a lot of outboard gear in there, API Lunchbox, and Synths like Roland JX, Prophet 8, Korg Polysix etc. In 2013, I left Berlin and moved to LA. Left all my gear behind and only worked in the box on my laptop for a few years until I started gearing up again. Now I work on that same laptop still, HEDD Audio Studio Monitors, Synths like Lyra 8, Roland JX (the boutique version), Moog DFAM, Yamaha Porta Sound, guitar pedals like the Fairfield Shallow Water, and many tape recorders. It’s not a huge collection but it makes me more creative to have less stuff around. I think simplicity and limitations are good for the creative process. 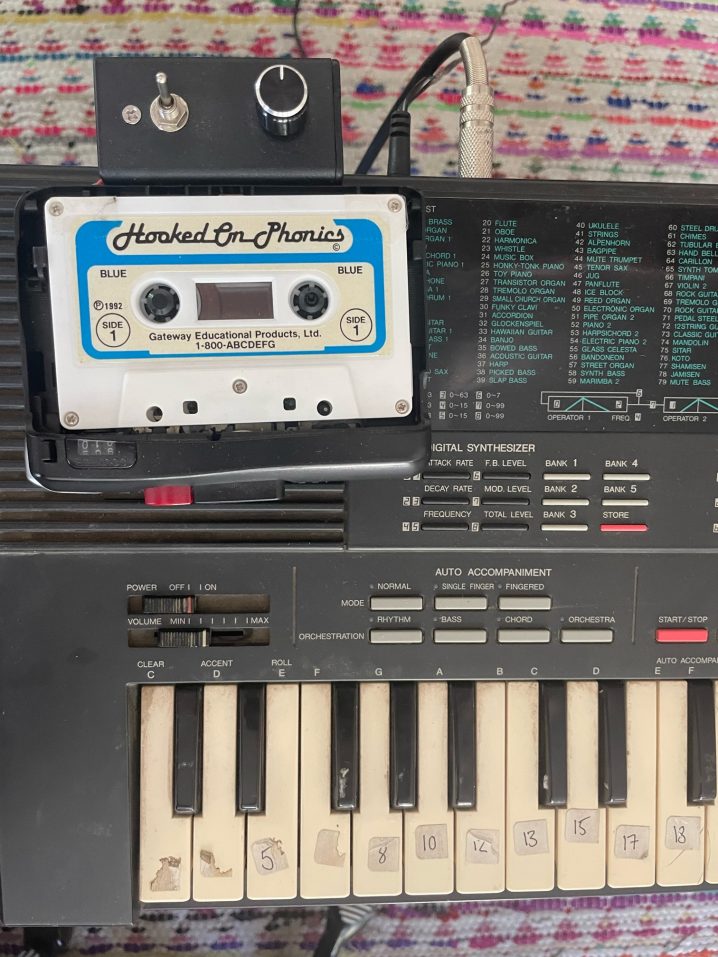 Tell us about your favorite piece of hardware.
I’d say it’s either this custom-made tape player by El Taller Pino which I really love, made of unfinished brass, or it’s the Lyra 8 Synth from Soma. I guess the latter is my favourite because it really is alive. It wants something from you as much as you want something from it. Often times it doesn’t give you what you want. It gives you what you need. I love it for that.

And what about the software that you use for production?
My DAW is Ableton Live, I’ve used it since version 1.0. And I love some Kontakt Libraries. Playbox is a great one from NI. I had the pleasure to beta test that for Native Instruments for a year. Friends of mine developed it and I used it in a ton of music before it officially came out this year. Also, love the Fab Filter Collection for mixing. ProQ3 is a life changer. 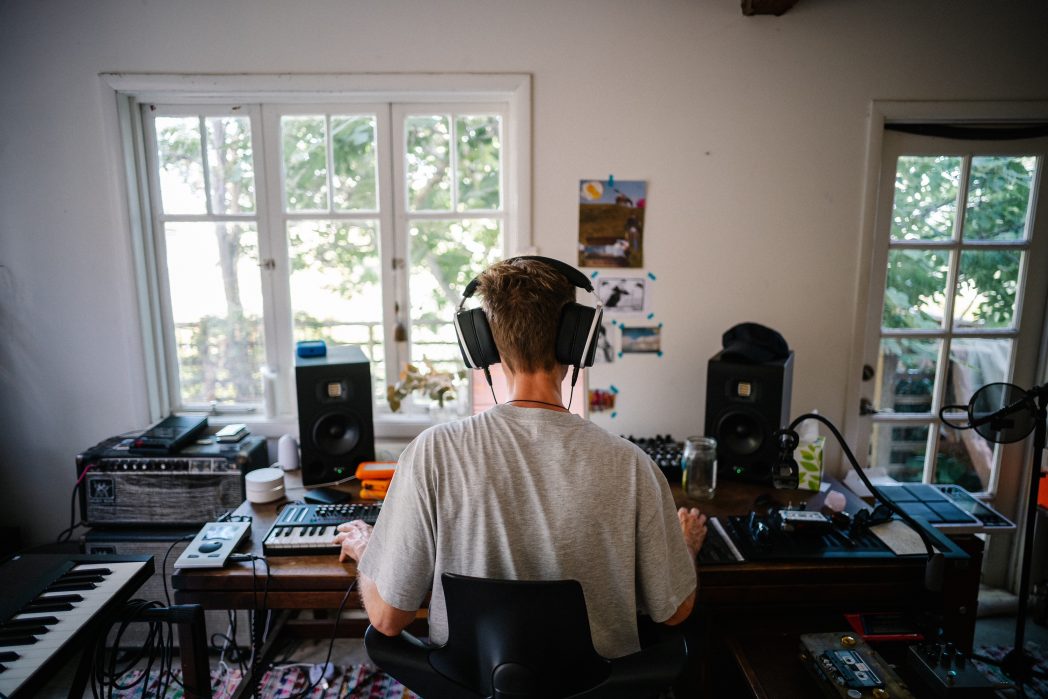 Is there a particular piece of gear that you’re just dying to get your hands on and do you think one day you’ll have it?
Not really. Many pieces of gear find me rather than me looking for them. And then I’m just aware that I needed this without knowing I was looking for it. Lyra 8 was one of them. It plays the main role on my album Sphere. Often I will find something in the studio of a friend or on social media and it will spark my interest. I’m not actively searching for anything but things pop up on my radar and draw them to me.

Can you please share some aspects of sound design in your work?
Sure. I like to resample things through tape a lot lately. For example, I’m using this modded tape recorder by Foldy Makes. I love recording synths or piano on it at a really slow speed. When the motor makes the tape just inch along in slow motion, it adds nice texture and unsteadiness to the signal which then I magnify by compressing and EQing it (love Fab Filter for this). Layering is obviously a big part of it too. I have my own sample library which has a lot of my sound design experiments in it. Sometimes, I just create an interesting sounding thing and don’t know what to do with it yet. It goes into my library and when I’m working on a piece of music I can just go through my library and see what fits in. On some days, sound design and composition go hand in hand. On other days, I just have a musical idea and have no time or head space for sound design because I want to stay focused on the composition/writing part of it, so then I’m glad to go to my library to sift through it for a sound design element that complements what I’m working on. 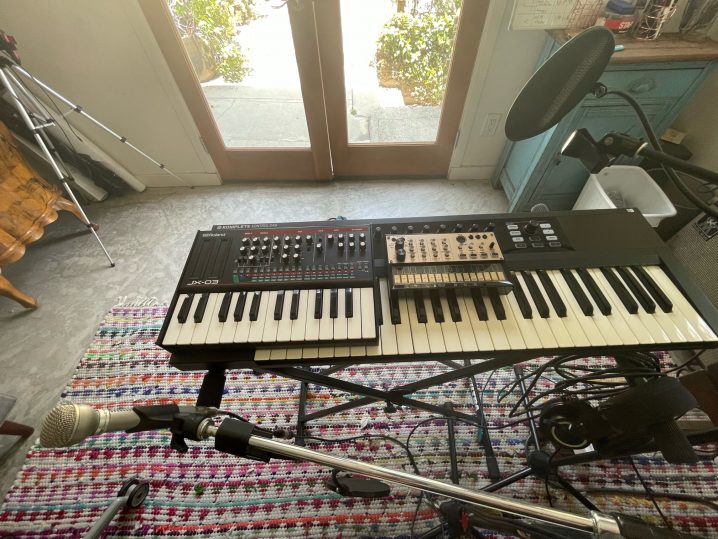 Any particular new techniques that you tried out for your new album?
With Foam and Sand in general, I really embrace the warbly unsteadiness of tapes, the intentional sound degradation, and focus on deeply textural stuff. I didn’t have all these tape recorders when I did my 2020 album “The Next Billion Years”. It was really something that started during lockdown with my Foam and Sand Ambient Project. So, with this new “vocabulary” in my musical language, I reimagined the album through the lens of my ambient project and ran these orchestral recordings I made in Estonia through tapes, slowed them down, zoomed into the details, and dove even deeper into the textures of these recordings.

What does your live setup look like, and what do you bring with you when you travel for an extensive tour?
My current setup is impossible to tour as I do immersive audio visuals events rather than live shows. The last one was a 32-speaker spatial installation with immersive visuals which we did in LA and London in collaboration with L- Acoustics, and in Berlin together with the Monom 4DSoundsystem. I’m looking into ways to make something like this a mobile solution that could possibly tour. 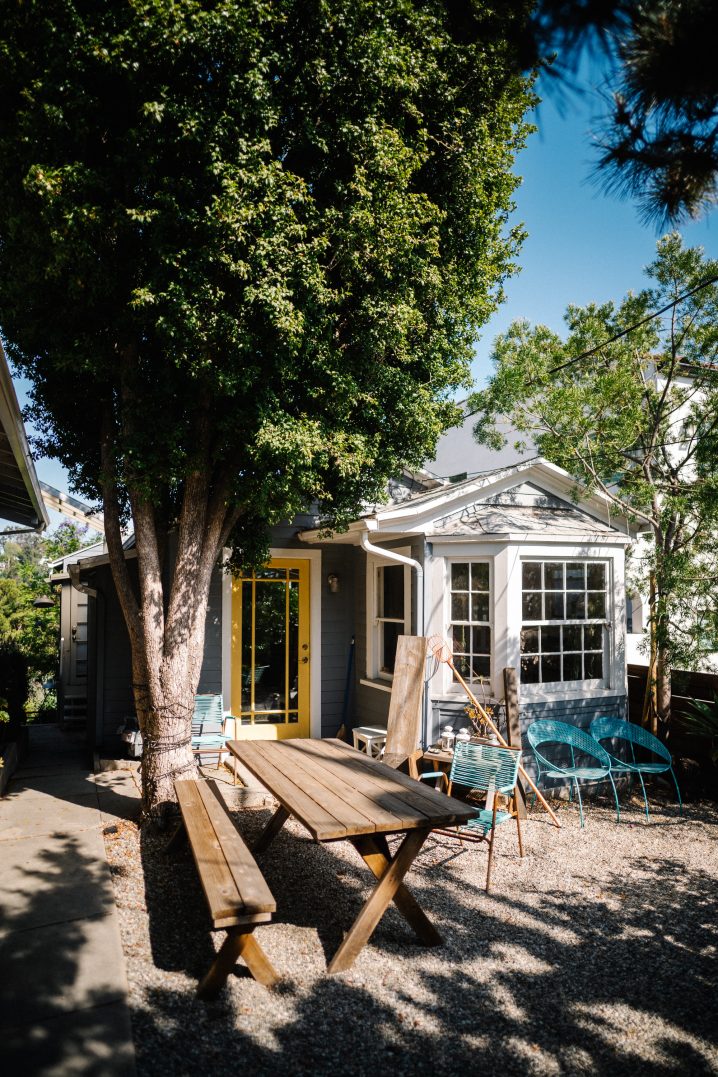 What is the most important environmental aspect of your current workspace and what would be a particular element that you would improve on?
It’s all about natural light, and not working till late. So, no artificial light sources are needed at all. My studio in Berlin was a dark cave, that needed artificial light all day (or night) long. To be mindful of energy I also switch off all the gear I don’t use, no standby modes. I try to save energy like that and also feel much better working with natural light. I’m not a night owl anymore. I start working in the morning and feel way more productive. I’m always looking to improve things, but I realize it has less to do with the environment and more with my mental attitude towards it. So, I do work on that. Meditate daily. Try to apply mindfulness and non-attachment in the creative process. Sometimes deleting something that is good but not needed can speed up and simplify the process. Slicing off anything that is not essential. I like to record things in a way so I can’t undo them, like printing stuff to tape with the whole FX chain on. And either re-recording it or committing to it. I did a whole Ableton “One Thing” Video on this.

What can you tell us about your overall process of composition? How are the ideas born, where do they mature, and when do they finally see the light?
I write a lot of music; I only release a small fraction of what I actually make. The process is rather intuitive. Either I start with an improvisation on piano or a synth or I create a happy accident tape loop thing that kicks off an idea. The ideas mature in a process of layering and leaving them alone. And then revisiting it. But also, not too much of that. Often times the main idea is born on one day and then I revisit it on another day and mix and master it on yet another day. I don’t want to obsess over revisiting things too often. When the idea is there, I try to not get in the way. I don’t like to overthink or overproduce stuff, change it all the time. That’s not my vibe. I have a pretty good instinct about when an idea wants to be left alone, and I leave it at that. When it comes to deciding what I want to release it’s also pretty intuitive. I listen to my stuff with my eyes closed (really important) because I can connect with it better that way. It’s all about… do I feel something? How does it make me feel? If I open my eyes and feel better than I did before I listened to the piece, then I know it’s something I want to share with the world. 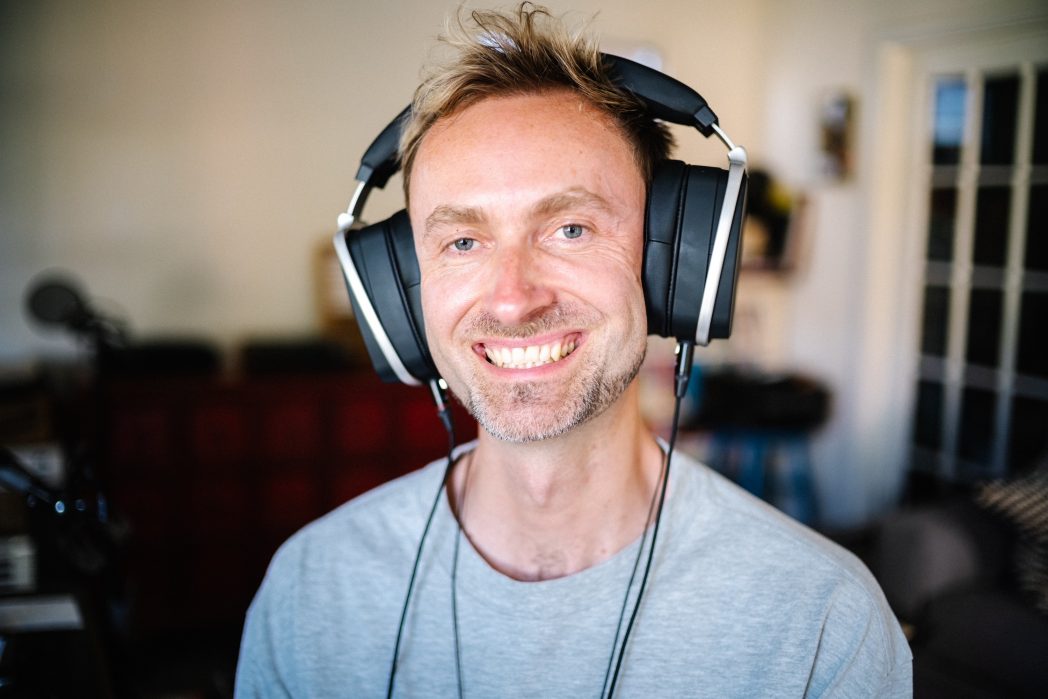 After the piece is complete, how do you audition the results? What are your reactions to hearing your music in a different context, setting, or a sound system?
I work a lot on headphones (ATH M 50) and do tests on different speakers and sound systems but over the years I’ve gotten quite good at gauging how something has to sound on my headphones to sound well on pretty much any other system later. It’s almost funny to me, thinking back on how insecure I was about my mixes for years. And now people ask me to mix or even master their tracks for them. Which I don’t do. I only do it for my own stuff as I don’t see myself as a mixing or mastering engineer but it’s nice to see that my mixes have gotten to a level where I can feel confident about them. It took a while.

Do you ever procrastinate? If so, what do you usually find yourself doing during those times?
Thankfully procrastination is really foreign to me. I’m pretty focused and result-oriented. My challenge is rather that I need to consciously make myself stop working. I can go on forever and exhaust myself, so I need to set some healthy boundaries. A walk in nature is always a good break. I set timers too, so I don’t forget to take breaks. 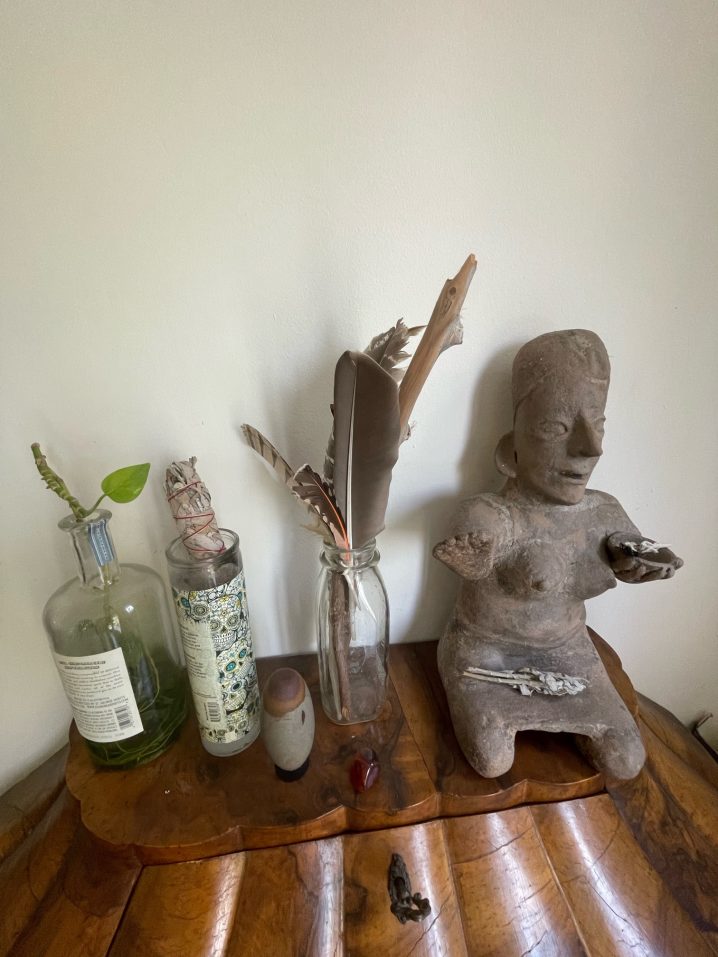 What gets you inspired?
Many things. Nature, conversations, science, and spirituality to name a few.

And finally, what are your thoughts on the state of “electronic music” today?
That’s a big question and my thought is that it’s been ever-evolving, sometimes self-repeating but constantly mutating. And I’m confident it will continue to do so. With all the trials and errors that such a process might entail, it’s all about the process. 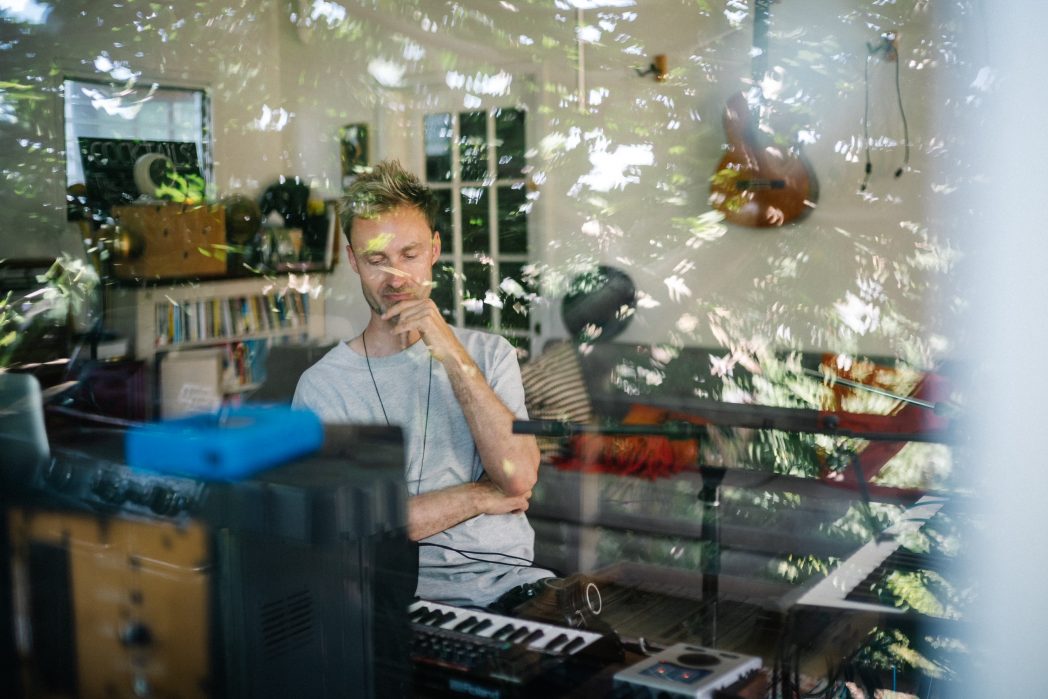