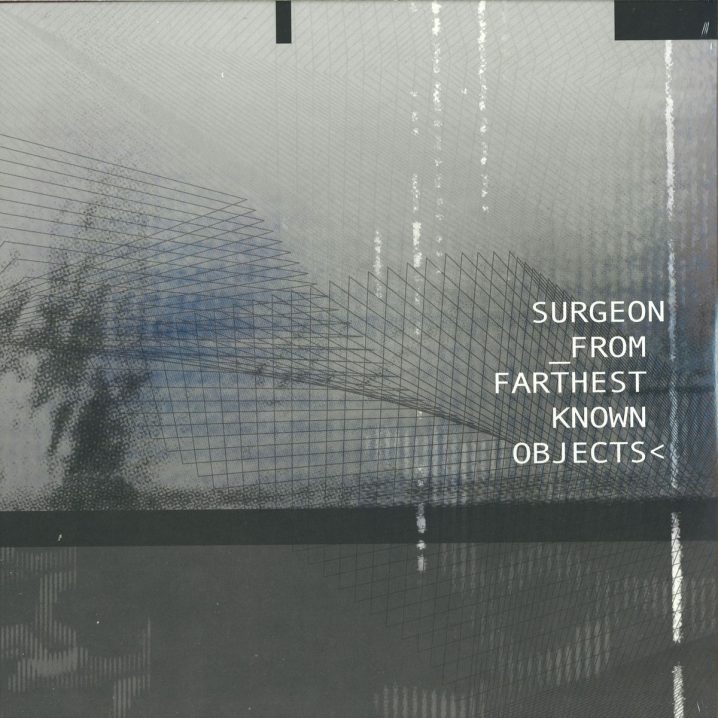 Anthony Child has been a justifiably renown figure in techno since his earliest records in the early to mid-90s. His biting, clinical flavor of techno is among the strongest of its kind and helped define the sound of minimal, harder techno in the UK and Europe throughout the nineties. Over 20 years later, he’s still going strong under his most familiar moniker, Surgeon, and From Farthest Known Objects may be one of his most distinct statements yet. As has seemed the case with many techno producers who’ve both shaped and soldiered through the evolution of the genre, he’s opted to create the eight tracks on this one with a modular synthesis rack.

The whole throwback to rack synthesis over software or samples or prefab synths has been en vogue for a few years now (perhaps best encapsulated in the techno reworks of Bob Ostertag by Rrose, released a few years ago), but Surgeon puts his inimitable stamp on it with the collection of tracks that is not only totally functional for a sophisticated dancefloor, but also really fucking weird. It’s like aliens heard a fuzzy transmission of techno and came back with their own response. The underpinnings of the opening cut “EGS-zs8-1” (yes, all of the track titles are equally scientific and unmemorable) should seem like a familiar techno jam, but its “drums” are really just detuned, bulbous, squishy synth stabs, with the pile-on effect of its layers transforming it into something less alien as a whole. Isolating these elements apart from one another, they feel weirder, less typical, more like a simulation of dance music through utterly atypical technology.

While exploring new production techniques using old and unlikely hardware, the results were so unusual that I really had the sense that these pieces of equipment didn’t actually create these sounds, rather they were in fact some kind of elaborate reception device that allowed me to tune into transmissions from Distant Galaxies. The music I could hear was actually the received transmissions of Pop Hits from those Distant Galaxies that were being played on their radio stations. I quickly recorded all that I could before losing the transmission.”

“z8_GND_5296” is perhaps cleaner, and even more relentless in its buzzy, FM gallop and far-off snappy snares. Its limited palette of sounds circles from back to front and left to right while a nagging toggling octave propels the track forward as a bassline of sorts. “SXDF-NB10006-2” features similarly squelchy patterns of synths as would-be drums, with its modulated chirps and accents feeling like pioneering electronic musician David Tudor making a club banger. Such is the case also with “ULAS J1120+0641,” whose grinding patterns interweave and heave in tandem, with its kick only hitting in a halfbeat mode and instead the rest of its arrangement clattering to essentially compel physical movement by any means necessary.

I consulted with Dr Andrew Read, the astrophysicist with whom I recorded Guitar Treatments in 1999. He has worked on the discovery of the most distant galaxies and astronomical objects in the Universe. Together we came up with a possible list of where these musical transmissions may have come from.”

Some of the tracks are perhaps less alien by nature, however. “GN-108036” feels more like a traditionally persistent banger, cleaner with less frenzied LFO on its percussion sounds. As with many of the album’s tracks, once a cut starts, it continues to hammer away until it stops. And yet to describe this music as simply repetitious does it a disservice; as with most prime techno that sets it apart from soundalikes, there is a good amount of finesse and sensitivity to pacing in this music, with just enough changing regularly to keep things interesting.

And that is not to mention the most obvious distinguishing factor: the sounds themselves. I am willing to wager that if you took all of the patterns of these tracks and spit them out as MIDI, and then played them back with a 90s arsenal of sounds and gear, they would very much feel in line with the rest of Surgeon’s impressive œuvre, but the fact remains that its adventurous use of more experimental sounds across its arrangements is a major reason for the awesome success of From Farthest Known Objects.