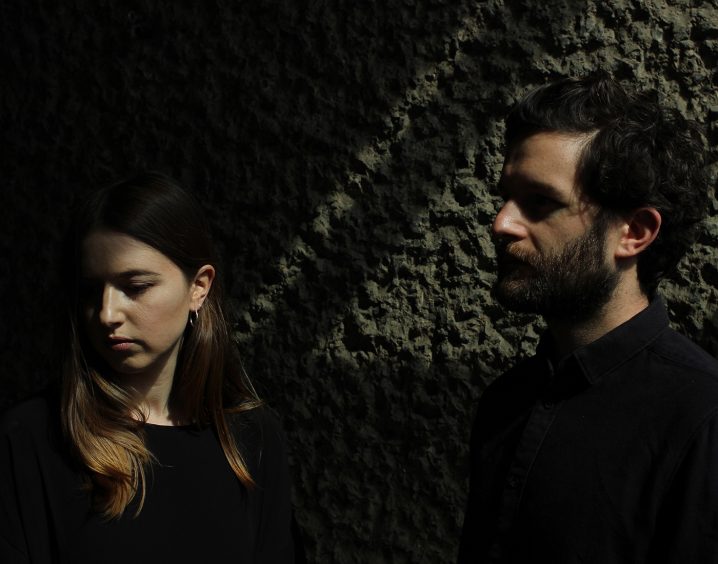 Lets start at the very beginning. Can you tell us how you got involved in composing, and what was your very first piece of gear?

Ed: My first real instrument was an acoustic guitar, nothing special but it had a pretty nice sound. My background is the common ‘in a band at fourteen writing depressing (and bad!) guitar songs’ ! But then the drummer in the band (my good friend James) got a Korg MS2000 and I started using my old Boss digital delay pedal with no input; with feedback and synths everything started to get a lot more interesting!

Anna: I learned to play on an electronic keyboard, which had a really cheap, fake sound, a very uninspiring piece of kit! But then when I was thirteen my grandfather bought me a real piano (which is the one we used on the record) and it was a whole different thing, so nice to hear the notes ring out properly, this really got me started writing my own pieces. 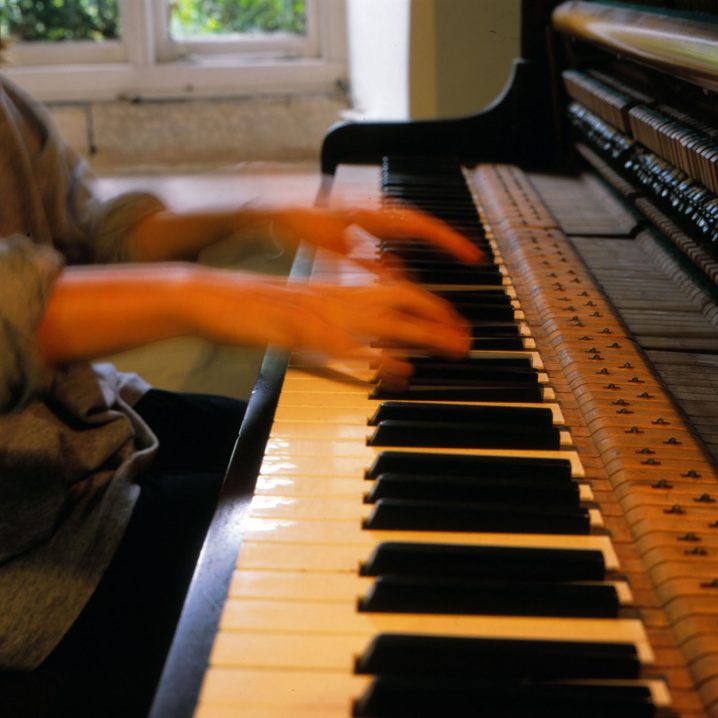 How many different studio iterations have you gone through, and what does your final setup look like right now?

Anna: ‘Studio’ is a bit of a strong word for any of the iterations we’ve had! Our first setup was in a bedroom, right behind the Iceland on Bethnal Green road, battling to keep the sounds of reversing lorries and sirens out of the recordings! Now we’re somewhere quieter the living room does just fine and it’s only the occasional bird that ends up on the tracks!

Ed: Our set up is minimal but does just fine for now, we’ve got a few choice bits of outboard, two pairs of nice mics and a decent AD converter to try and make sure that the recordings are as good as we can make them. We’re hoping to add more outboard for the mixing stage as soon as we can afford it! 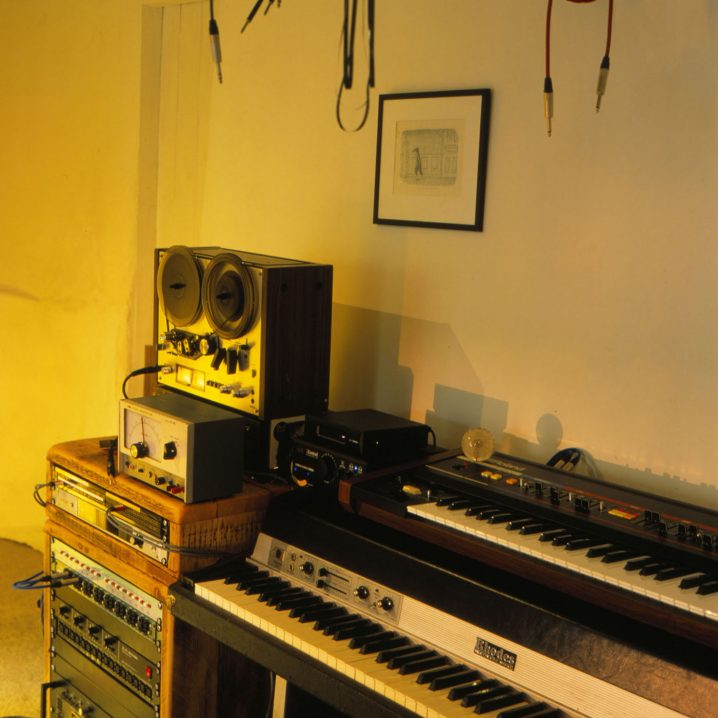 Tell us about your favourite piece of hardware.

Ed: We’ve got these old 1950’s tube preamps that sound beautiful, they impart a very real, three-dimensional quality to anything you record with them. I couldn’t be without my various tape machines either, they’re all cheap, consumer pieces (sadly no Studers or anything) but for loops they’re perfect. Maybe it’s because they’re cheap, they give a familiar sound that anyone who grew up with walkmans would be very familiar with. I love how they shape whatever source you record onto them and give it an intimate, homemade sound.

Anna: The Juno is my favourite bit of kit. It’s so warm sounding, I really don’t like ‘lawmower’ square waves! This let’s you keep things nice and round! We didn’t use it that much on this record but will be using it live a fair bit. 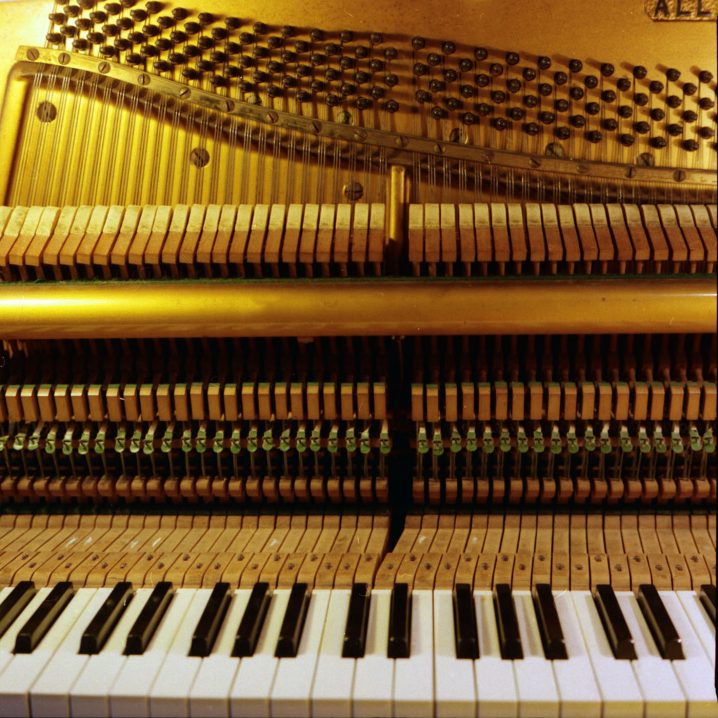 And what about the software that you use for production?

Anna: Production wise we used Logic on the record. Not for any particular reason apart from that we already owned it and it saved us shelling out for any other software!

Ed: We’d love to have a nice desk and a multitrack tape machine but unless the used gear market relaxes a bit that’ll have to wait! We also used Max/MSP (I’m quite a Max nerd) and although, in general, we tried to keep the computer away from this record there were a few instances where some of the patches I’ve built helped us create some nice soundbeds. 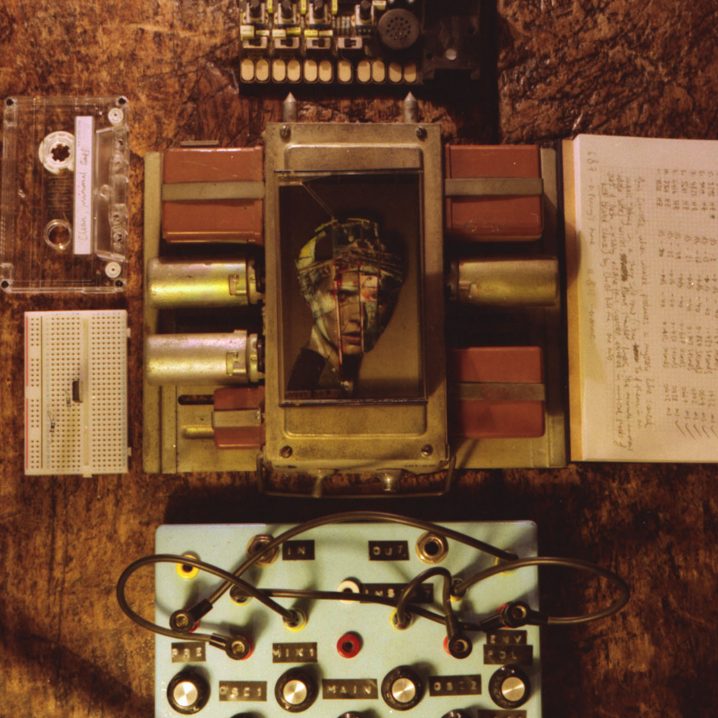 Is there a particular piece of gear that you’re just dying to get your hands on and do you think one day you’ll have it? At the moment I starting to collect a little range of pedal effects. A friend showed me the Montreal Assembly ‘Count to Five’ which is really interesting.

Ed: That ‘Count to Five’ looks nice! Thanks for the tip. I’ll add it to my list, which is very long and (mostly) very optimistic! I’d love a Siemens/WSW desk, which is unlikely to ever happen, as they’re very expensive! I’d also love some nice EQ’s, nothing too surgical, just something that can do broad strokes, some better mics would be nice too! Instrument wise my dream would be an ARP 2500 but this is probably even less likely than the desk!

Anna: I’d just like a nice Cello and some Cello lessons! 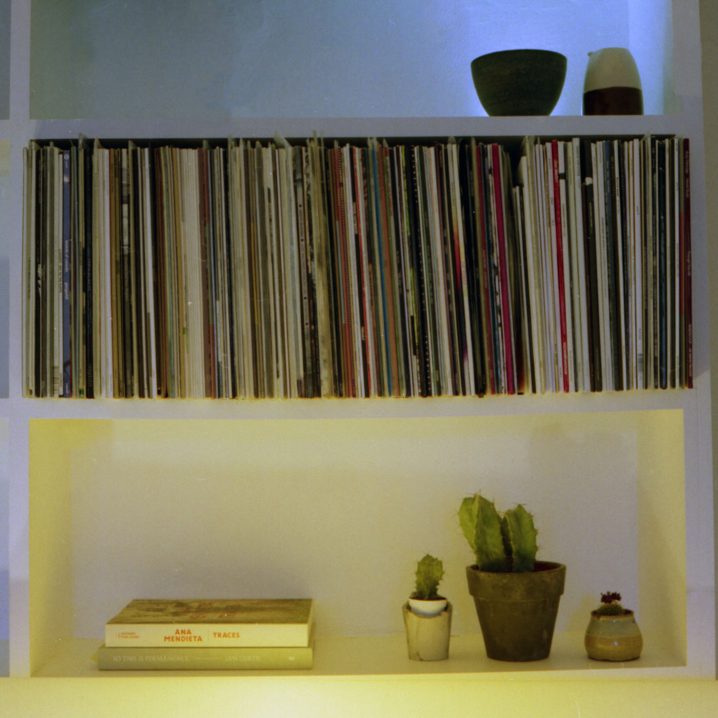 Can you please share some aspects of sound design in your work?

Ed: We used Max/MSP patches (and some synths) for drones and the tape loops for other textural elements. We also daisy chained reel to reel machines to create a multihead tape delay. I really like working with tape, it’s a slow way of effecting sound but the tactility of the effect more than makes up for it and it’s lovely watching tape running around the room! 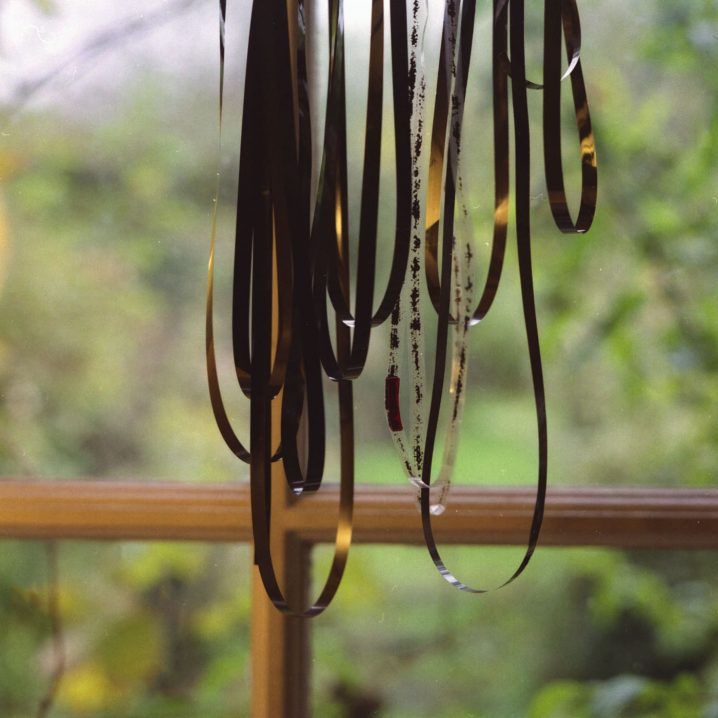 Any particular new techniques that you tried out for your new album?

Anna: Writing vocal harmonies and string arrangements are things that are pretty new for both of us. We’re actually thinking to move further into this direction for the 2nd record and integrate vocals a lot more.

Ed: We’d subject the tape loops to various different processes of degradation to so how this changed the characteristics of the source; from sticking bits of cellotape over the playing side of the tape to putting the loops in vinegar solutions and outside in the sunshine. We also experimented with driving the input of the tape machines quite hard, it gives a distorted and compressed sound that’s really satisfying. 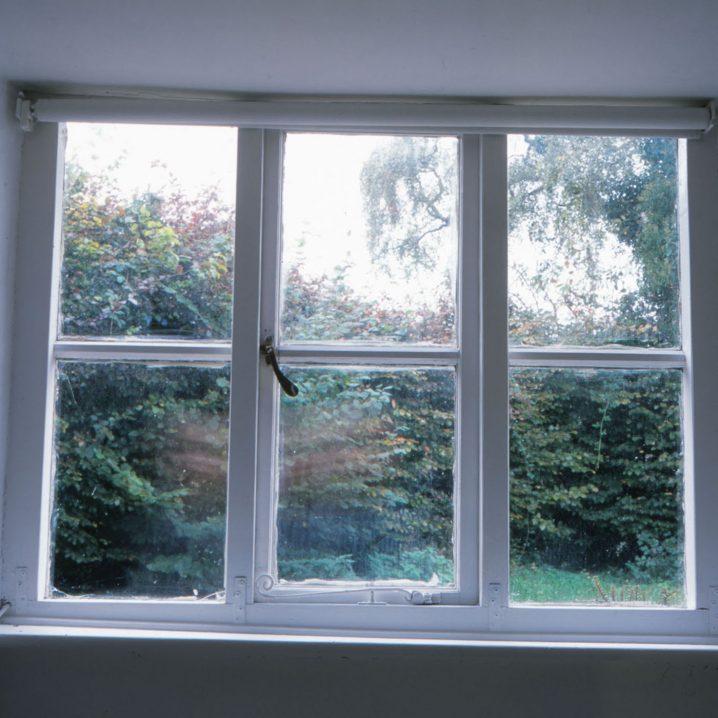 Ed: Can we let you know in a few months?!

Anna: We haven’t played the new record live yet but Ed is tinkering with a few different machines at the moment that may or may not be stable enough to bring with us when we play some shows next year!

What is the most important environmental aspect of your current workspace and what would be a particular element that you would improve on?

Anna: The space that we have here is really important. We’ve got the ability to have the studio in the house and this gives us a real freedom to record at any time of day or night, which is really liberating.

Ed: I’d definitely improve the sound dampening! It’s a pretty reverberant room and this makes it hard to get clarity into recordings with fast transients. 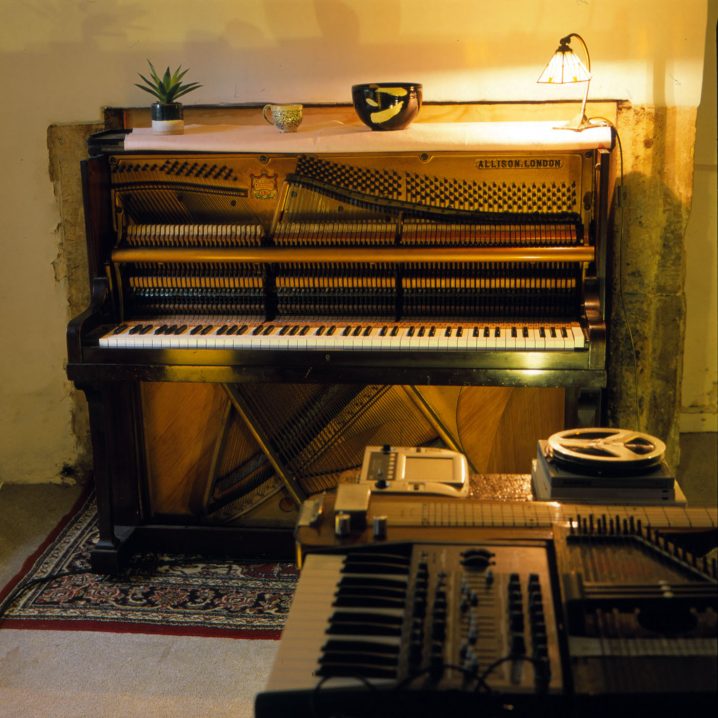 What can you tell us about your overall process of composition? How are the ideas born, where do they mature, and when do they finally see the light?

Anna: It really varies with each track. Some tracks come out of improvising together with very little addition and editing (‘Falling In’), some are me writing parts to things Ed has worked on separately (‘Blooms’) and some are Ed embellishing solo piano recordings (‘Trills’).

Ed: We try not to have a default method of writing together as I think we’d both get bored quite quickly if each track was made in the same way. Hopefully there is still cohesion on the record, in spite of this! 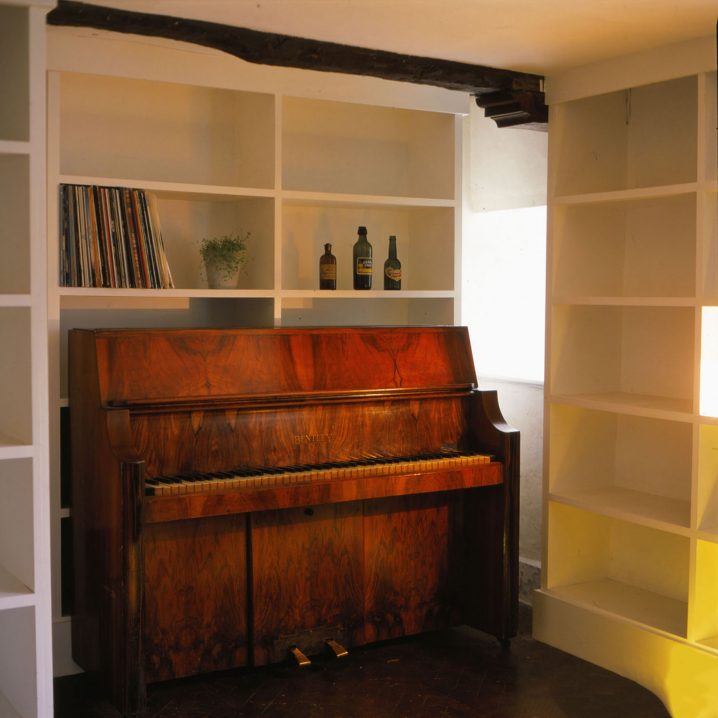 After the piece is complete, how do you audition the results? What are you reactions to hearing your music in a different context, setting, or a sound system?

Ed: For me it’s always monitors, then some speakers in another room, then cheap in ear headphones and sometimes the car. If it works in all of those places then it’s done. Usually it’s a fairly endless process of tweaking which ends when Anna tells me to stop! I don’t ever really feel like a mix is finished but sometimes you just have to move on. Otherwise there’d never be a finished record!

And finally, what gets you inspired?

Anna: Usually I don’t know where my inspiration comes from; it’s from everything and nothing at the same time.

Ed: I find making music meditative, it grounds me in a way that nothing else does, that’s why I’m inspired to keep making it.