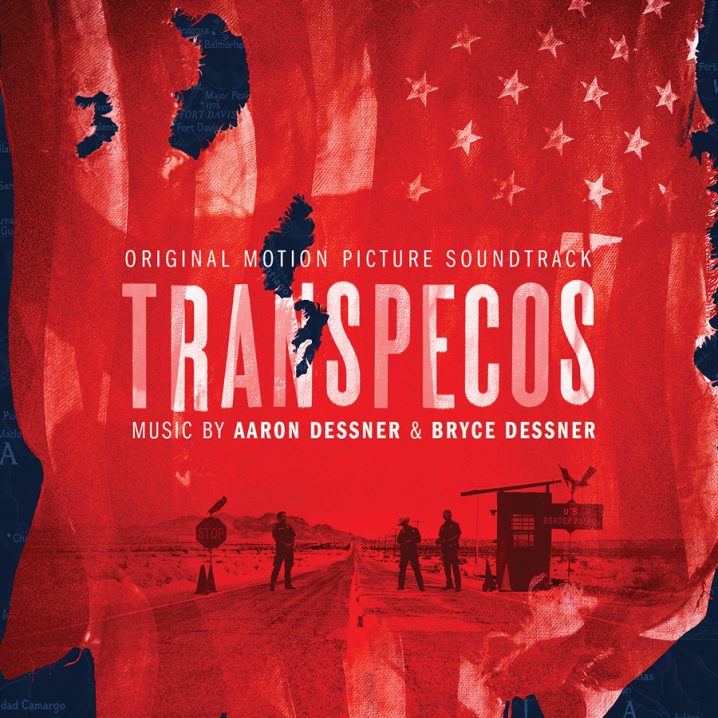 I’ve heard of Bryce Dessner before. In fact, I covered his split with Jonny Greenwood which appeared on Deutsche Grammophon and, of course, his collaboration with Ryuichi Sakamoto and Alva Noto on The Revenant OST. Dessner is also the guitarist for The National indie rock band, with releases on 4AD (you might have heard the 2013 Trouble Will Find Me, highly lauded on some popular music sites). What I didn’t put together, is that his brother, Aaron Dessner is also a composer, also a member of The National, and also a prolific guitar player. The two come together to work on a soundtrack for Transpecos, an atmospheric debut thriller by director Greg Kwedar, starring Gabriel Luna, Johnny Simmons, and Clifton Collins Jr.

Those following my musings on these pages already know that I tend to approach most soundtracks without first having seen the film. This allows me to absorb the music as is, having its own impact on my auditory perception pathways without the visual, conceptual or story telling counterparts. If the music evokes a particular feeling, leaving a lasting impression behind, then its purpose has been fulfilled, and it can only enhance a director’s vision, an actor’s performance, or a writer’s account. Such is the case with all soundtracks that end up on these pages – they are albums that withstand on their own, becoming a score to your every day life. This, without hesitation, can be said about Transpecos.

Comprised of 18 short pieces, the soundtrack is a moody meditation on a vast landscape, sprawling across the hot wasteland, like a dark lonely cloud. Nearly ambient in nature, the music features acoustic and electric guitars, often gliding over a deep rumbling bass. The sounds of finger-picked strings remind me of Settlers by Western Skies Motel, with that mournful, lonesome, and timeworn American West solitude. Distant drops of water, the sliding steel guitar and folksy harmonica revive the roots of instrumentation so prevalent in this backdrop. This, no doubt, echoes the film’s setting, taking place on a remote desert outpost in Texas, which you would have picked up on even without knowing the plot. And that’s the best compliment I can give to a film score.