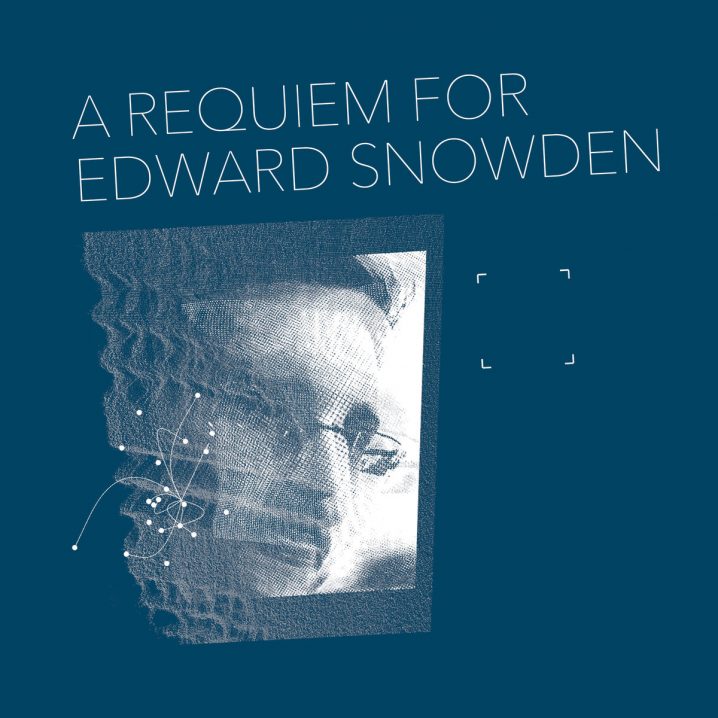 The greatest fear that I have….. is that nothing will change.”  -Edward Snowden

A Requiem is usually written ‘for the repose of the soul or souls of one or more deceased persons’, but the term ‘has subsequently been applied to other musical compositions associated with death and mourning, even when they lack religious or liturgical relevance‘. I’m sure that Edward Snowden has bigger issues to deal with – living in hiding somewhere in Russia while seeking asylum elsewhere (“but that’s actually a little bit of a misunderstanding. I live on the Internet.”). But how would he feel about a ‘Requiem’ while he’s still alive – and while his ideas are more real than they ever were? Or is this Requiem not meant for him personally, but a Requiem for an ‘open’ and ‘free’ society?

Matthew Collings’ audiovisual piece, A Requiem for Edward Snowden, reminds us not to forget the extremely relevant themes we’re dealing with: “loss of faith and security, the hacking of digital media, invasion of privacy and personal sacrifice.”

The documents released by Snowden reveal that we live in a world in which we are totally reliant not just on methods of communication, but on daily routines in which our privacy is completely compromised.

I was lucky enough to be able to attend one of the few performances of this project (in Utrecht), to witness the real-time visuals (by Jules Rawlinson) interacting with the gestures and performance from the two live electronic performers, a clarinettist and a string section (cello and violin), “exploring the piece’s central theme at sonic and visual levels”.

The audio recording of A Requiem for Edward Snowden comes with a download code for the full length visual version of the performance. This way you can get a good impression of what the live-setup was like, even if you weren’t there yourself. But, as impressive I remember the live performance was, I found the audio-only version to have even bigger impact simply because I wasn’t distracted by the visuals.

There’s a lot of (nervous) interaction between the string section, the clarinet performance and the (often distorted) electronic layers which suggest that they are grabbed directly from the invisible everyday data streams. Most of the visual message parts were pre-recorded, of course, but I could not help imagining the impact it would have had if the live performance would have included a real-time hacker grabbing material from the audience’s mobile phones and exposing them on a big screen during the performance!

This is not exactly your average enjoyable ‘contemporary neo-classical’ music, and it definitely isn’t ‘romantic’ either. Though there are quiet parts, most of the piece is quite unnerving. It is not an ‘easy’ Requiem to listen to. And it shouldn’t be, of course, because it seems there’s not going be a happy ending to this story soon.