Everyone knows Mille Plateaux. I don’t know many other musicians interested in experimental music that weren’t influenced by something in their catalog. Lesser known (it seems to me) is the sublabel of Mille Plateaux, Ritornell. All except 5 of their 32 releases came out between 1999 and 2001, and almost all of those were packaged in this very clean, white, reverse-board, triple-foldout all-board package with a traditional text-only design – changing only the text color and information (for the majority of the releases) from release to release. To someone who appreciates CD packaging and concept, it’s a beautiful thing.

I haven’t heard all of the releases, and I only have a handful of them myself, so I’ll highlight three of my favorites. 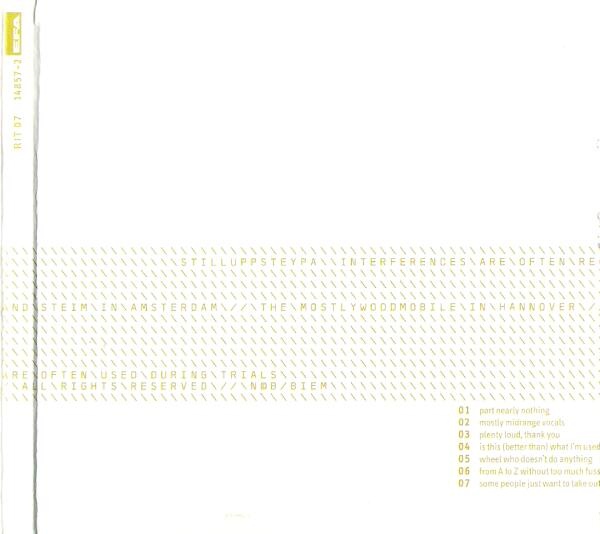 First is the most unusual and profuse, Interferences Are Often Requested: Reverse Tendency As Parts Become Nearly Nothing by Stilluppsteypa. Stilluppsteypa is fascinating to me, mostly because I have no idea what they’re doing. It always sounds different, but most often like an engine – or a scene – from a distance. Little is repeated, but it’s wavering, and there’s movement somewhere inside. You see the scene – the neon lights, the steam coming from the street – the light in the window, the heads moving behind the frosted windshield. A cab is idling on the corner, and the person across the street hasn’t moved for the last 15 minutes. This is just the outside – when the music changes to focus on something more specific – maybe on the inside – it’s all the more unsettling and incredible. 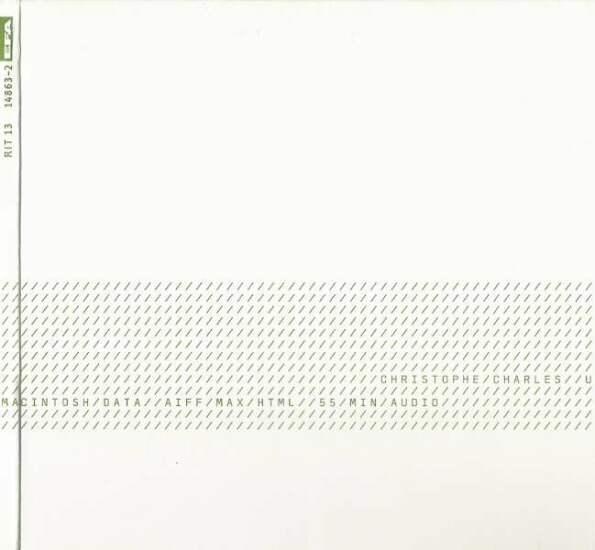 Second – Undirected / Dok by Christophe Charles – plunges into an entirely different setting. There’s vision, there’s movement, there’s pure and direct definition, and most importantly randomness. It stands out with its unprocessed (or nearly) field recordings and digital collage – mixing, creating a purist soundscape purposefully random. Who’s really controlling this, though? There are bubbles of echoes, deepened pianos, a flurry of max/msp-guided processing and overturned fx, devotion to noise and then silence, microscopic ambient, and shudders – then suddenly you’re walking through a market, or stepping off a bus at your home stop. Nothing is predictable, and honestly I think this CD changes every time I listen to it. When the bells start, sounding as if they’re on a mountain in Tibet, it’s something else. 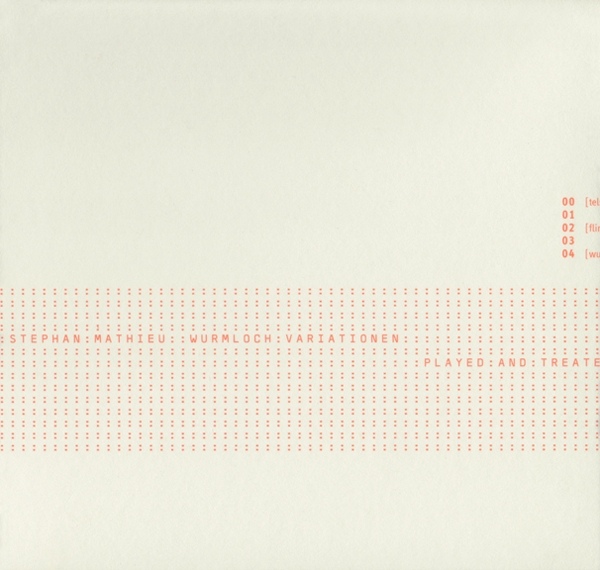 Last and not least is Wurmloch Variationen by Stephan Mathieu. When I heard this, I’m not sure if I had even heard Mathieu’s music before – maybe I only knew Heroin with Ekkehard Ehlers – but Wurmloch Variationen was something altogether different entirely. I remember listening to it once when I drove to Wyoming – it was mid morning, overcast, passing through the southeastern side of Colorado. It’s incredibly flat, and only very very far in the distance can you see a row of mountains. It looks like a really distant wall, and it makes you feel very far away. Rain came in and out, and these fuzz-filled bass booms filled the place, wet with sheets of soft noise. It’s like sitting in a tent in a medium wind, with rain lightly pelting it. You can see a light from outside, but the tent shields the view. Without any natural translation, it’s combed into digital matter, and yet that alien nature makes it feel even more human. Maybe that’s how we really imagine it?