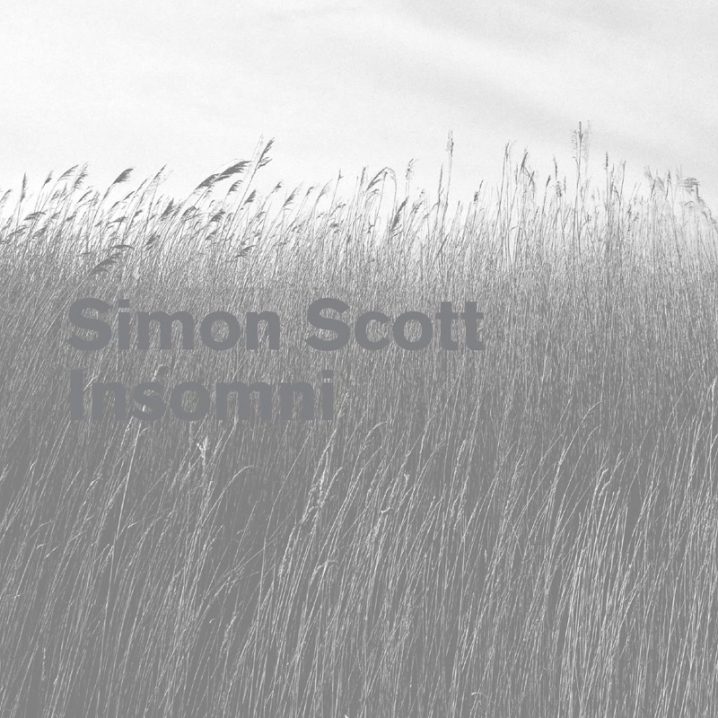 When it is dark enough, you can see the stars
Charles A. Beard

There are people who know Simon Scott as member of the renown shoegazer band, Slowdive. I have, unfortunately, never got into their music during their reign (even now I can see Rafael Anton Irisarri glaring down at me for this comment). I have, however, come upon Simon Scott’s music back in 2009, where, for the first time since his playing drums for Slowdive, he has ventured out to release a solo album. Since then, Scott’s music appeared on many of my favorite labels, such as Miasmah, Low Point, Slaapwel, and even 12k. Scott also runs and releases on his very own imprint, Kesh Recordings. His latest full length, Insomni, lands courtesy of Ash International, a long running outlet for Mike Harding, who is already busy with curating releases for Touch.

Insomni opens up with a slowly rising guitar strum slash drone slash noise, perfect as a soundtrack for my early morning walk, as I step out towards a lethargic and barely visible sun. The volume ascents with the climbing star, and soon envelopes every cell of my body. Gentle ambient soundscapes are intermixed with growling distortion, and it is this cocktail of dynamically opposing sonic vibrations that awakens my neurons, and a smile creeps in. The thunder eventually dissolves into a field recording of chirping birds, and Scott’s guitar chords tell their story. Those awakened in the midst of night will recognize this texture of insomnia, mixed with fleeting thoughts within an empty chalice of a mind, and distant sounds of the universe unfolding on its own… all on its own…

Couldn’t sleep… arose to forage for sound. The hum of the fridge encouraged further investigation of hidden, domestic sounds; the fish tank, dvd player, a broken laptop… Dawn and morning light allowed more sound and the guitar, in its case, beckoned… From darkness to light… -Scott

Insomni pursues its tale through a set of repetitious passages, shimmering light and lo-fi fabric. These are accented with environmental sounds (including the pickup of a cellular electromagnetic interference), wrapping this reverse lullaby into an organic aural pillow of music to wake up to. My favorite moment on the album enters with Scott playing his acoustic guitar (the press release credits a Guild 12-string D-125 and Vintage Guild six-string GF-25) – this is where Scott’s talent as a multi-instrumentalist truly shines – it feels like Simon Scott is all this music, all these sounds, all this one. This is a beautiful record to add to your collection, and if you buy directly from the label you will receive two bonus tracks not available anywhere else. Highly recommended for fans of Rafael Anton Irisarri, William Basinski, Lawrence English and Christian Fennesz.