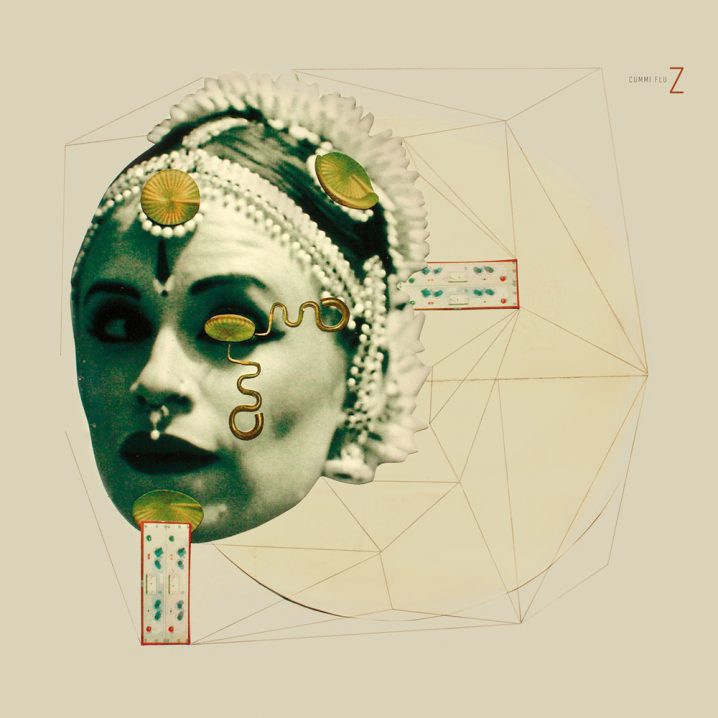 Gloss over the abstract cut-up cover art or the single letter title of this album and you just might miss a treasure trove of sounds, stories and textures. But dig a little deeper and you’ll begin to uncover the mystery of everything that is Cummi Flu. First and foremost is the name – a newly established persona of Oliver Doerell, the same Brussels originating “multi-media illusionist” (now residing in Berlin) who is collectively responsible for the works by Dictaphone, SWOD, and Raz Ohara And The Odd Orchestra, and, along with Roger Döring (on the clarinet) has previously opened up my ears to m.=addiction on City Centre Offices, back in 2002. Now, partnering with ALBUMLABEL (a division of Random Noize Musick along with Shitkatapult), Doerell brings us a brand new incarnation of his always morphing mind.

Listen closer and you will hear all of the beloved elements of jazzy-glitchy-psychedelia originally driving the beauty of Dictaphone and SWOD, with a slight nod to the track names using the first letter abbreviations (initials?), like “Z.”, “J.”, and “B.” – who (or what) are these psychedelic figures that float in and out of our slightly blurred vision, and where do they come from, and why do they brood? Various organic percussion components (including rubber bands and bass kalimba), chopped-up vocal samples and field recordings, looped riffs and patterns, glued over each other, in a collage of abstract compositions, mixed media and found art, create an impression of a potpourri and paste-ups, but shortly your mind clicks in with the sequence, and you begin to nod your head to the rhythm.

There is not a sound on Z that has been included by chance. Each acoustic event has been painstakingly carved, demonstrating its creator’s attention to detail. The squeak of a computer, the sound of a door shutting, the drawn-out hum of a cello – everything here is of equal importance, positioned democratically side by side.

Mastered by none-other than Nils Frahm, Z is an album of beautiful riddles to be left alone, in an unsolvable, genreless, opaque landscape, untouched, untroubled by the mind, allowing the listener to simply drift among its long and twisted corridors, of noir-fi dramas, memoirs and myths. This is the place of déja vu’s, of induced flashbacks and hallucinations. This is a misaligned puzzle, with slightly rough edges, ripped book spines, and crooked frames. It is a source of music that seems to be a little damaged. Just like you.