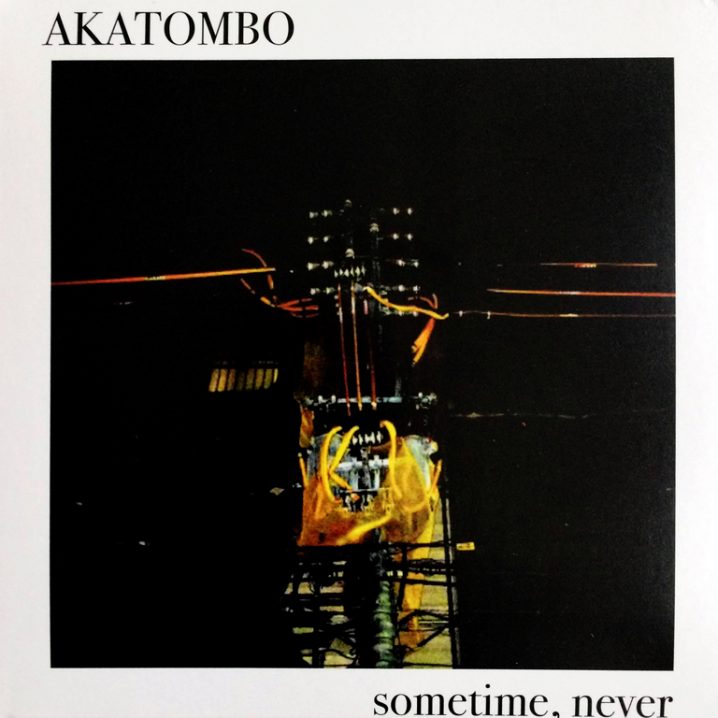 Paul Thomsen Kirk’s fourth album as Akatombo, on his very own Hand-Held Recordings, is even darker than ever. I suppose that there is always a veil of mystery between the artist and the listener – the musician projecting the inner image of his mind set onto a sonic canvas of their perceived reality. And, as the case is with Sometime, Never, this experienced anguish is present more than ever.

The album is immediately even darker than his 2012 release, titled False Positives. Kirk’s industrial environments score the protagonist’s midnight crawl through the abandoned city. Here, images of my last visit to Hiroshima inevitably come up: a child’s twisted tricycle, covered in dirt, soot and ash, leaning against a brick charred  wall, its story permanently burned into our memories. The lo-fi processed rhythms sway along the stereo field of this mid-80s neo-noir dystopian science fiction film. But in the now current future projected from the past into our ever imminent present, this post-apocalyptic consumer-driven plastic imagery is the norm. What would happen when humanity meets its imminent demise? This. Only this…

Although I tend to keep the most personal details of each musician out of the words about their music, in the case of this Hiroshima dwelling ex-patriot from Scotland, I can not hold back. As you read this, Kirk is bravely fighting multiple lung tumors, battling the various side effects of chemotherapy medication along the way for the past 3 years. This intense state of mind inadvertently (or, perhaps, rather by design) enters into his music.

Fans of everything post-industrial will be pleasantly at home among the intricate and highly detailed aural metaphors of Sometime, Never. Presenting its very own soundtrack, Kirk weaves in unknown (film?) samples, drawing on the tense character of his bioclimatic pieces. Some of the tracks are irresistibly familiar, positioned comfortably among all of your favorites from Blackest Ever Black, Vatican Shadow, Vessel, Raime, Silent Servant, Emptyset, and a ominous, post-punk side of Demdike Stare.