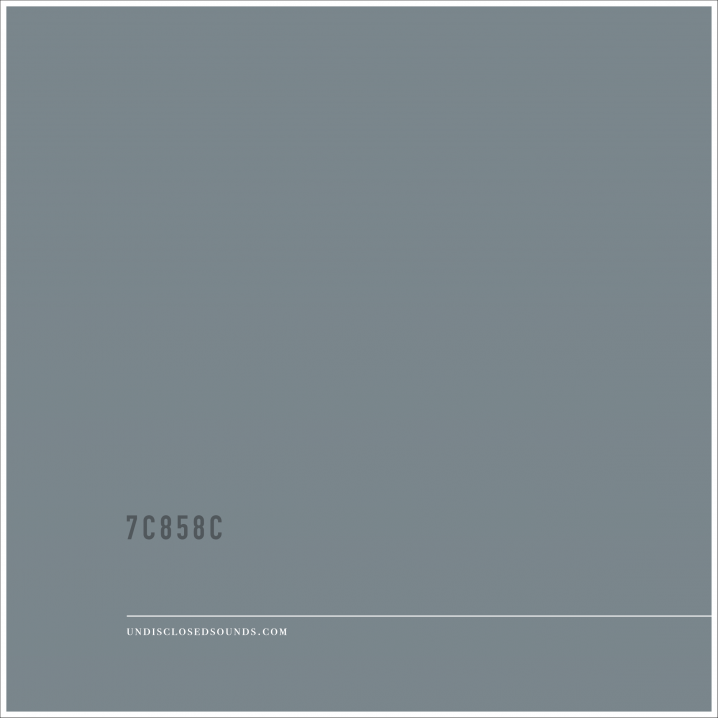 [EDITOR’S NOTE : Since the birth of Headphone Commute, it has been one of my self-imposed rules to avoid self-promotion. I would rather spend countless hours recommending new music, then market my own projects. This has become a bit difficult, especially when I wanted to tell you about a benefit compilation (which I overcame due to the charitable nature of the project), and now is even more complicated with the release of UNDISCLOSED. Thankfully, Peter van Cooten came to the rescue, when he published a review of 7C858C on his fantastic Ambient Blog. Below is the syndication of his words. Oh, and OK, the second EP in the series is scheduled to be released tomorrow, February 20th. I hope you enjoy!]

To reveal art and conceal the artist is art’s aim. – Oscar Wilde

One of the most active and vibrant websites about electronic, experimental and instrumental music I know, Headphone Commute, has even found the time to start a new side-project called UNDISCLOSED. Throughout the years of running the site, HC (who remained anonymous) wrote about and interviewed many artists – which finally initiated the idea of launching a series of ‘anonymous‘ releases: music of which the artist remains undisclosed (so is not revealed publicly).

“The project allows each musician to explore a particular sonic territory, while remaining detached from all of the previous associations with their notable name. The series also invites the listener to strip away all of the predisposed concepts and instead focus on the only thing that really matters — MUSIC”

The releases are available (at a very sympathetic price, so you don’t need to hesitate) on the Undisclosed Bandcamp page – which now features the premiere release of the series: 7C858C (the hex color code for the grey cover) by – ehhm… well… no spoilers please … whoever thinks he knows may not say so! The music released in this series is not completely random, of course, since all artists and releases are curated by HC and thus will come from the scene of contemporary artists that Headphone Commute has covered or will cover.

By concept, it’s unsure what the future may bring for this project – but the remotely dubby tape-loops and multi-layered drones of 7C858C are a great start! I imagine it can be interesting for any artist to create music without caring for expectations any listener might have. It may inspire to explore new creative directions. But the concept of anonymous music can be confusing, too. After all, music lovers like to delve deep into the background of their beloved music, putting it in a proper historical context, analyzing the artistic development over time. It’s quite difficult to listen to music out of its contextual relations.

Every time I hear an album, I try to listen to it as if it was a debut album from someone I have not heard of before. But that can in fact be quite hard sometimes. In the past, I have bought quite some crappy albums from artists I previously admired – thus to some kind of ‘confirmation bias’ I guess. In hindsight, I would probably NOT have bought these if they had been released by a completely unknown artist. Which proves in a way that, when you strip away everything you know, just the music remains. Just the music, nothing else. Just the immersive sound of ambient drones, exactly the kind of sound I thoroughly enjoy and can’t seem to get enough of.

But soon another confusing aspect revealed itself: I must admit that I have absolutely no idea about who this artists may be! Desperately listening to clues in the details that might reveal some individual aspects… but I feel this music could have been created by many – many – of the artists I know of. That came as a bit of a shock, to be honest. Am I unable to recognize distinctive details? Am I just a ‘shallow listener’? Or does this mean that there’s too much ambient music, and that a lot of it starts to get exchangeable?

Well, maybe. But that doesn’t mean that’s a problem. I think that all genres are their own ‘bandwagon’. First there are the original artist and then there are the followers. And as there are more and more followers, it becomes more important to ‘stand out’ because otherwise it’ll all start to sound the same. This is true for Rock, Reggae, Blues, Soul, or every other genre.

Someone’s voice may be immediately recognizable – you won’t ever mistake Ella Fitzgerald for Frank Sinatra (I hope). And that may also apply to a personal style of playing – especially of acoustical instruments. But with electronically generated sounds things it may get be a bit harder to distinguish (although there are still a million ways to treat the same device, of course). And isn’t ambient music generally created to be played in the background, often lacking distinctive properties by design? When you go to the beach and listen to the waves rolling in, do you immerse yourself in the sound and just enjoy the moment? Or do you listen and think “Mêh .. The waves sound just the same as they did yesterday…”?

Anyway: I must admit that I still have no idea who may have created this music. In fact, I gave up trying to find out, just enjoying the sound for what it is by itself. I guess Oscar Wilde would be pleased with that!

Be sure to also check out 2F2D30 released on February 20th!