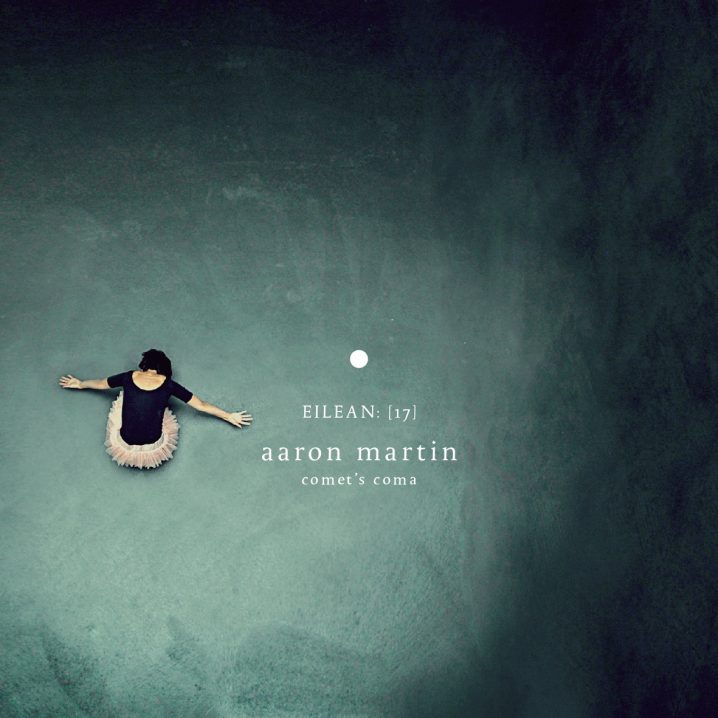 Topeka, Kansas based artist Aaron Martin follows up his split with Christoph Berg, Day Has Ended (Dronarivm, 2013) [one of my favorite albums of 2013] and his solo live album Chapel Floor (Sonic Meditations, 2014) with another stunning release, Comet’s Coma, this one on the enigmatic Eilean Records. The label itself is based on a map of an imaginary place with 100 points, each point associated to a number and each number to a release which will give that area of the map colors, relief and details. Comet’s Coma is map point 17 and a particularly special one.

What is this music? Electroacoustic ambient? Perhaps, but it is too arrestingly beautiful and emotional to be ever be considered unobtrusive. Modern classical? Post classical? Post folk? All of the above and none of the above. Whatever the case, the listener is held in rapturous attention to this impressive record crafted from a menagerie of instruments (electric guitar, cello, bass, ukulele, singing bowls, voice, roll up piano, banjo, bowed cymbal, snare drum, glockenspiel, lap steel, acoustic guitar, mbira, and concertina) and wrapped in grainy textures created from vinyl and field recordings.

Just as the coma of a comet is a sublimation of the inner core into a radiant cloud, the songs on this record are sublimations of longing, nostalgia, grief, and hope coaxed from the wood, strings, metal, fiber, and wind, bound together in resonance and reverb, and radiating empyrean beauty. This is particularly the case with the longer pieces such as ‘Lost to Light’, the title track, and ‘Widow’s Walk’. These are counterweighted by shorter more direct pieces drenched in nostalgic Americana tones such as ‘Gathered at the Edges’, ‘A Narrow Clearing’, and ‘Surface at Dusk’. And one cannot ignore the spellbinding opening track, ‘A Figure Falls Still’ or the hauntingly mournful ‘Poured Out, Pulled Under’.

Comet’s Coma is as exquisite as it is moving, as rustic as it is ethereal, as delicate as it is intense. It is superb. An album this special had to be mastered by knowledgeable and loving hands and those hands belonged to Fletcher McDermott (aka twincities) who also has a release out on the label called Variations on the Celesta. The cover art is from photographer Laura Zalenga. For even more on Aaron Martin, dig back to his Worried About The Fire release on Experimedia in 2010, and then walk your way backwards to his first three releases on Preservation – Almond (2006), River Water (2008) and Chautauqua (2009). Comet’s Coma is available in digital format and a limited edition handmade, hand-numbered CD which will absolutely sell out.