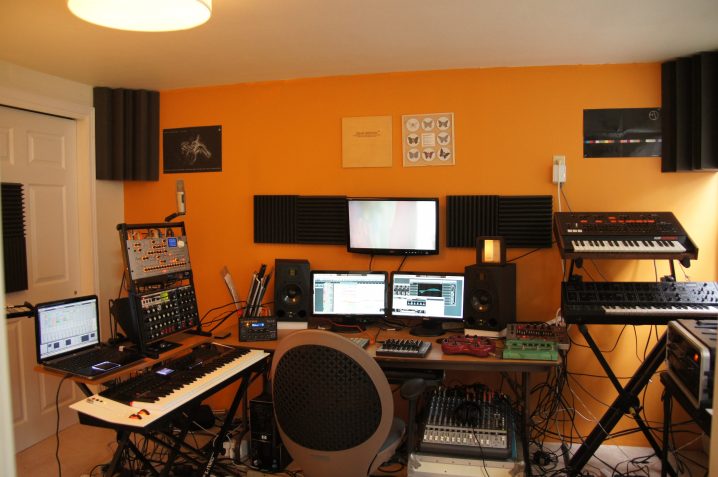 Jeff McIlwain has been on my radar for 15 years now, ever since I heard his bass-dropping IDM cut-up beats on Isophlux back in 1999. McIlwain released four full-lengths on Ghostly International as Lusine, two records on Hymen under his Lusine Icl moniker (where the “Icl” stands for “intercontinental”) and nearly 20 EPs altogether. The 2007 Language Barrier is still a very special album in my collection. Most recently McIlwain put out an Arterial EP on Ghostly under his L’usine alias. Today we get a chance to take a peak inside Jeff’s studio, and talk about his process, environment and more. Enjoy!

Lets start at the very beginning. Can you tell us how you got involved in composing, and what was your very first piece of gear?
I had been making tapes of various DJ mixes off the radio in Dallas in the early 90’s and was interested in figuring out how this music was made, so I started out buying a Yamaha RY30 drum machine, just starting with the beats.

How many different studio iterations have you gone through, and what does your final setup look like right now?
A lot. In the first few years, it started out as mostly hardware. A drum machine, work station, analog synth, effects unit, sampler. Then I got a computer in the mid 90’s and my first laptop around 2000. I didn’t even get proper monitor speakers until about 2001. 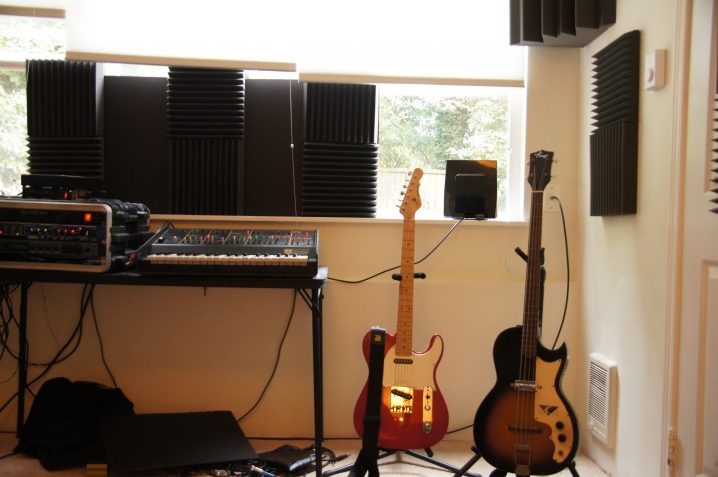 Tell us about your favorite piece of hardware.
I got a Mark 3 Arp Odyssey back in ’96 for $300 bucks. It’s been my go to synth ever since, and it’s still by far my favorite of everything I own.

And what about the software that you use for production?
I use FL Studio and Cubase for my main sequencing and editing. Lots of plugins, and a couple random things I still use often like NI’s Kontakt and even Cool Edit for quick editing. I use Ableton Live for my live setup and some of the Max for Live tools as well.

Is there a particular piece of gear that you’re just dying to get your hands on and do you think one day you’ll have it?
Not really. For me, I’m pretty careful about buying stuff. I honestly feel like continually buying gear actually slows you down. I still have major gearlust, but I usually end up getting stuff I actually need. Lately, it’s been a lot of acoustic instruments, like the cello, and random hand percussion stuff. My friend Rafael gave me his Glockenspiel, which I’m looking forward to putting to good use. I am kind of interested in going back and buying one of the smaller Akai MPC’s because I used to program on an MPC 2000 for a couple projects around 2000 and I really liked it. It would be a nice thing to get out of the studio with, where you don’t HAVE to rely on the computer for making sampled sequences. 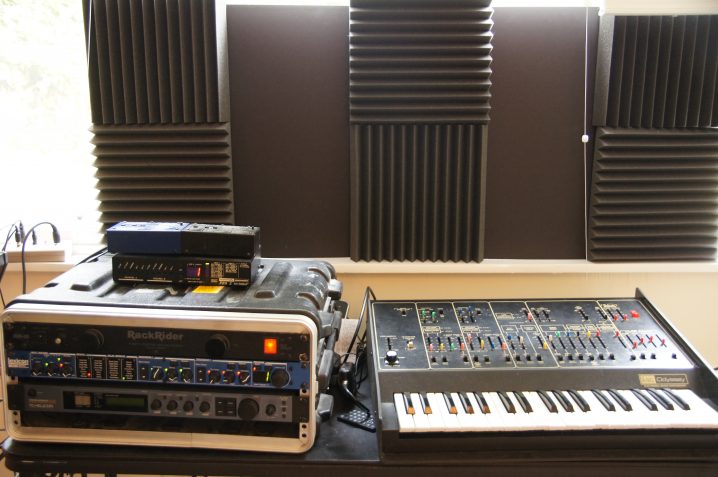 Can you please share some aspects of sound design in your work?
My sound design is mostly sample based. I use synthesis as sort of a starting point, but I usually end up manipulating various samples, which may include some stuff I’ve recorded in with synths. I like stuff that’s got a lot of transients, so a lot of times field recordings play a part. But, usually the “sound design” I do is tied to a more musical project, so I hardly ever make sounds just for sounds-sake.

Any particular new techniques that you tried out for your last album?
For my last album, I was really interested in all sorts of ideas revolving around arpeggiations, and sequencing multiple mono synths together to make sound-scapey, busy sounding, but a bit more “live” sounding music. Also, I recorded a drummer in a proper studio for a couple tracks as well, which was quite nice.

What does your live setup look like, and what do you bring with you when you travel for an extensive tour?
I have a laptop running Live, two midi controllers (launchpad and UC-33, although I JUST switched over to the Launch Control XL), a little mixer, and a DSI Tetra. 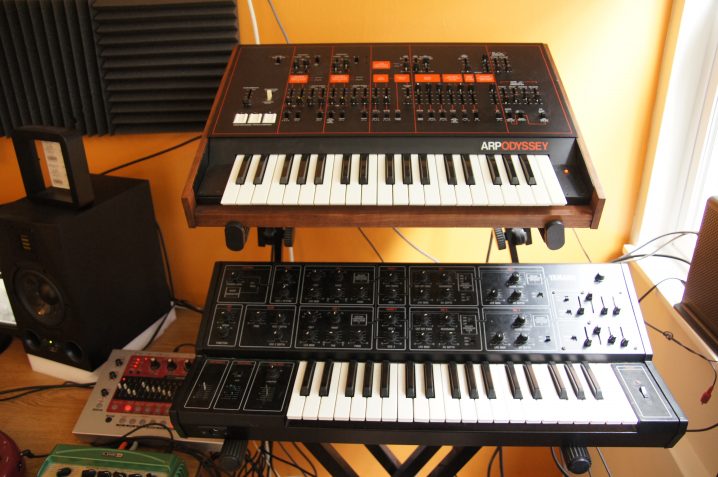 What is the most important environmental aspect of your current workspace and what would be a particular element that you would improve on?
I like it to be not too “dead”, but with decent acoustics. It’s also important that it’s in a cooler area of the house, because we don’t have A/C. When it’s hot in the rest of the house, it’s not so hot in the studio, which is nice. I get a nice little view of my backyard, so it’s not like being totally closed off from the rest of the world as well. And it’s far enough away from our bedroom and living room that I can leave the studio and it actually feels like I’m leaving the studio.

What can you tell us about your overall process of composition? How are the ideas born, where do they mature, and when do they finally see the light?
I think I kind of jump into a track with rhythm and melody at the same time. I use a lot of samples, so I might start with a synth line, but it quickly starts involving various textures to give me an idea of what the feel of the track will be. I don’t like just starting with a melody or beat, because it doesn’t really tell me much about the track as a whole. So, once I have a short, but layered pattern going, I can branch out from there.

After the piece is complete, how do you audition the results? What are you reactions to hearing your music in a different context, setting, or a sound system?
I’ll bring it into our family room, where I have a bigger system set up. I usually have to tweak the bass, it’s probably the one thing I have to mess with. But, usually they’re pretty minor tweaks. I have gotten used to mixing on the monitors I have, so I’m pretty confident in how it will sound these days. It used to be a lot more arduous. 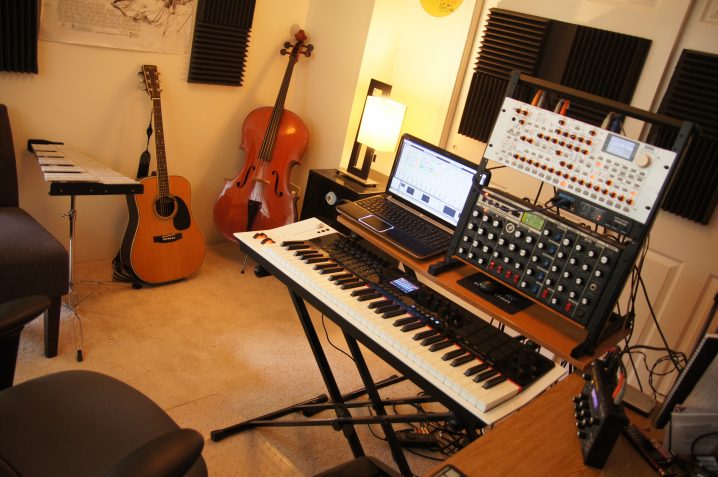 Do you ever procrastinate? If so, what do you usually find yourself doing during those times?
Who doesn’t? I think a lot of times I’ll pretend I’m going to buy something for the studio, and get all into the research to pass the time, but end up not doing it. I think it can take me a day or so to dive into a new project, but I’m pretty good at taking small steps towards something new, and letting myself be a little lazy in the process, maybe listen to some other music or jump on Facebook or something. I’ve been doing this a long time, so those uninspired times don’t bother me as much. It really is a part of the process.

What gets you inspired?
I get really inspired by watching films and seeing some piece of music work really well for a scene. I also tend to get inspired when I’m out seeing someone perform or DJ and I’ll hear something new and just really want to figure out how to get “that sound.” What I end up doing with it is usually totally different, but it’s always a good jumping off point.

And finally, what are your thoughts on the state of “electronic music” today?
Oh, you know, good and bad. I prefer the times when electronic music is not very popular. I think it’s nice to be on the outside and focusing on music, maybe being inspired by indie rock or something. It gets a little hectic in my head when there’s all this hype about electronic music, but I honestly feel like I’ve ALWAYS been pretty left field of whatever’s going on, so it ends up not really affecting my productivity all that much. I think a lot of what people talk about being “electronic music” isn’t really electronic music. It’s more like top 40, or generic sounding party music or something, that happens to be electronic. So, it just seems so separate from what I’ve always cared about, which is music that might run with a particular style, but does it in a completely different, and more interesting way than you were expecting. 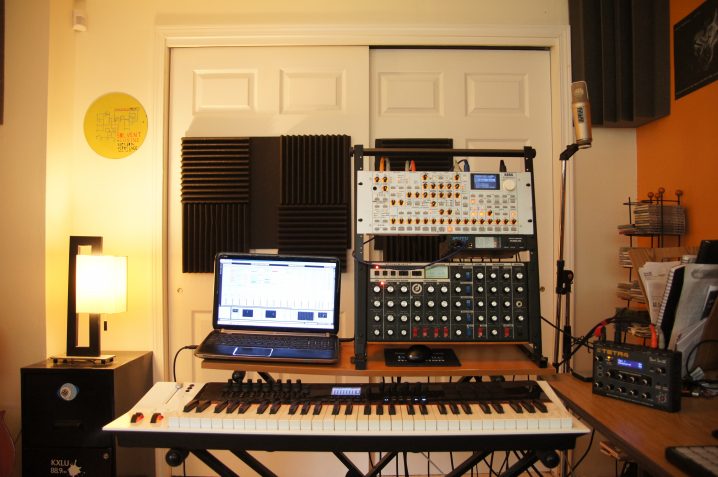