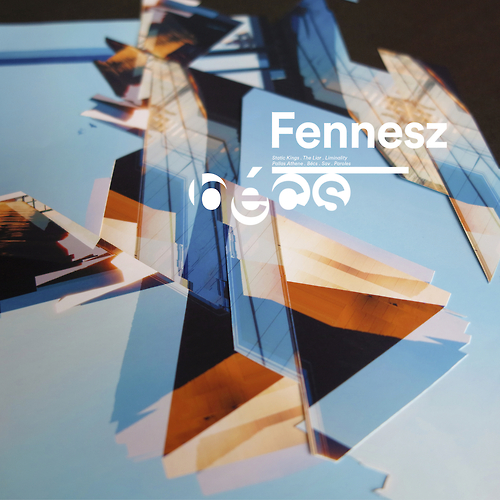 Christian Fennesz’s first new material in some years is a welcome return. I’ve been a fan of most of his music I’ve heard, whether it was the sublime underwater tech pulse of Hotel Paral.lel (Mego, 1997), the outright noise of portions of plus forty seven degrees 56’ 37” minus sixteen degrees 51’ 08” (Touch, 1999), or the gloomy ambience of Black Sea (Touch, 2008). The logical comparison for Bécs is his crossover hit Endless Summer, released on Mego in 2001 [ed. in fact, the press release states that Bécs is the “conceptual follow up to that landmark of abstract pop“]. It was the album that seemed to have the broadest appeal, with its sunny disposition and breezy guitar arrangements that were far more musical and melodic than most of the haze that preceded in his other releases.

Bécs [pronounced ‘baeetch’ and is Hungarian for ‘Vienna’] opens positively sparkling with “Static Kings,” a sure sign that this album is quite estranged from the dark waters of Black Sea. It’s not to say it’s all easy listening; “The Liar” opens with a crusty, jagged edge and proceeds into a blistering sprawl, alternatingly melodic and gritty. In gorgeous contrast is the full-blown glory of “Liminality,” a vastly expanded version of the track “Liminal” from his Seven Stars EP released on Touch a few years ago. It’s a worthy inclusion and is downright stunning for its full 10 minutes.

Fennesz was smart to let it trail off for a good extra minute of quiet before resuming with “Pallas Athene,” feeling like a welcome respite after the splendor of that sprawl. It’s a handsome contrast, too; its arrangement is all pads and organs, without a guitar in the mix. In contrast to the shimmering sunlight of the first few tracks, “Pallas Athene” is like a drift high up in the clouds, gaseous and hazy. In a similar vein, “Bécs” begins with an overdriven piano, rough with brittle distortion and a harsh spike about it, blooming into something that sounds like Vangelis put through the wringer, turning more into a prickly cloud of sound than a clear piano piece.

“Eschewing the more drone orientated works of Black Sea, Bécs returns to the more florid pop mechanisms as deployed on Endless Summer. […] Bécs is not just an album or a series of songs, it’s a world to inhabit, a landscape ripe with sounds, songs and that esteemed Fennesz signature. A singular work by a singular artist.”

Perhaps the most interesting sound design on the release is on “Sav,” a fascinating melange of chimes, drones, feedback, noise, and atmosphere, feeling like somewhat of a convergence of many of the various sounds and ideas he’s explored over the years. “Paroles” is a sweet epilogue wherein Fennesz’s acoustic guitar resonates clearly and melodically, enhanced by some airy, phased pads and effects, but otherwise a decidedly unaffected outro until his effects take on a life of their own in the final stretch. It’s an interesting contrast, hearing both Fennesz and Ben Frost’s new albums for the first time, so close together. Each one explores heavy distortion and noise, but to very different ends tonally. While Frost dives headlong into the abyss, with Bécs Fennesz looks upward to the sky, reveling in the rich variation of light and shadow, sun and clouds, clarity and haze.