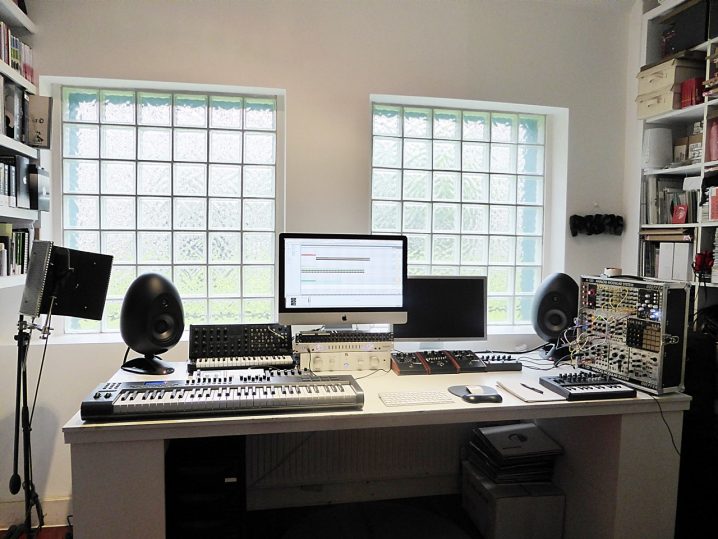 Among his many monikers, Robin Rimbaud is most known for his work as Scanner with releases dating back to the early 90s, and a vast discography on labels such as Ash International, Sub Rosa, and his very own imprint, Bette. What started as a focused fascination with radio waves, mobile phone signals, and police scanners, has evolved into a full-blown production and artistry of enormous proportions, the inner workings of which we are honored to share with you today.

Lets start at the very beginning. Can you tell us how you got involved in composing, and what was your very first piece of gear?
I used to play with a cheap 1970s plastic hand-held tape recorder we had at home when I was about 8-10 years, recording tv shows, family and playing in the garden with my Action Man soldiers. I still have the original tapes where I recorded Spiderman with me aged 9 reading all the credits as they rolled up on the cartoon on TV in around 1973! Then I had piano lessons aged about 10-11 but sadly my mum couldn’t afford the lessons as they were too expensive (50 pence a lesson) and we had to sell the upright piano we had at home shortly afterwards. Fortunately not before my music teacher at Secondary School played us the work of John Cage and aged 11 I hurried home to record my brother and I hammering away inside the piano, as our own very unformed experiments in sound!

Aged 14-15 my English teacher at school gave me his reel-to-reel Teac tape recorder and suddenly my creative world changed. Whereas the tape was a linear device and allowed me to play one sound AFTER another, collaging them together with the pause button, now I could ADD one sound on top of another, although the heads on the machine were out of alignment so nothing could ever be recorded in sync so much of my early tape experiments exhibited extremely odd time signatures or simply abandoned the idea of tempo and explored more textural ideas.

So in a sense the interests were always there and it was the access to such tools that enabled the creative process. I still own all these tapes in my archive back to around 1975. I absolutely knew what I wanted to do when ‘grown up’ when I was aged 16 years old and feel very fortunate that this actually worked out fine 😀 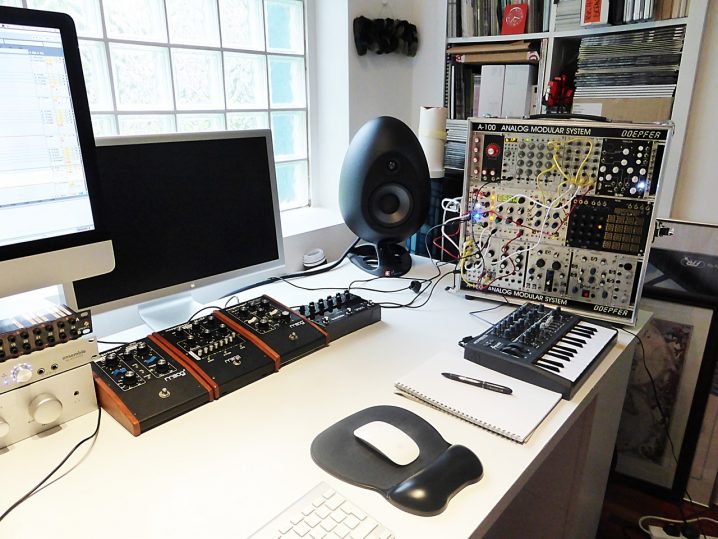 How many different studio iterations have you gone through, and what does your final setup look like right now?
My first semi-professional recordings were made in my bedroom, like many musicians, then my first dedicated studio space took over part of my home office for ten years, but for the last fifteen years my studio has remained in the same location, but the equipment has constantly changed and developed. There’s no sense of a ‘final’ studio as I’m constantly rethinking the creative process as it should be. At present I’m working with different interface designers to explore non-linear, non screen, physical tools in the studio, ways of making work whilst standing and moving. Indeed I’ve been working at MIT in Cambridge USA over the last five months exchanging ideas of performance, streams of creativity and how the body relationship to sound is essential.

Tell us about your favorite piece of hardware.
I suppose this is a question that will be constantly rethought. At present my favourite hardware is my new modular system which I’ve been building over the last couple of months, to the point where it’s offering a new direction for my creative process. I blame musical friends like Benge and the film I Dream of Wires for sending me in this direction!

I’ve always been keen on using tools that disable habits, so that I don’t repeat myself. There’s something very encouraging about the network of creatives using and building such tools too as there’s a genuine sense of community and support. I’ve always remained an enthusiastic listener and creator of work so it’s a real joy to connect with a fresh world of creative minds and nimble fingers.

And what about the software that you use for production?
I use sequencing and arrangement tools in the shape of Ableton Live and Logic Pro X and plenty of software plug ins. Most frequently I use the Arturia V Collection suite of soft synths with Mini V, Modular V, CS-80V, ARP2600 V, Prophet V & Prophet VS, Jupiter 8-V, Oberheim SEM V, Wurlitzer V and Spark Vintage, Native Instruments Komplete with Kontakt, Reaktor and so on, then many of the iZotope plugins like Iris and Breaktweaker. 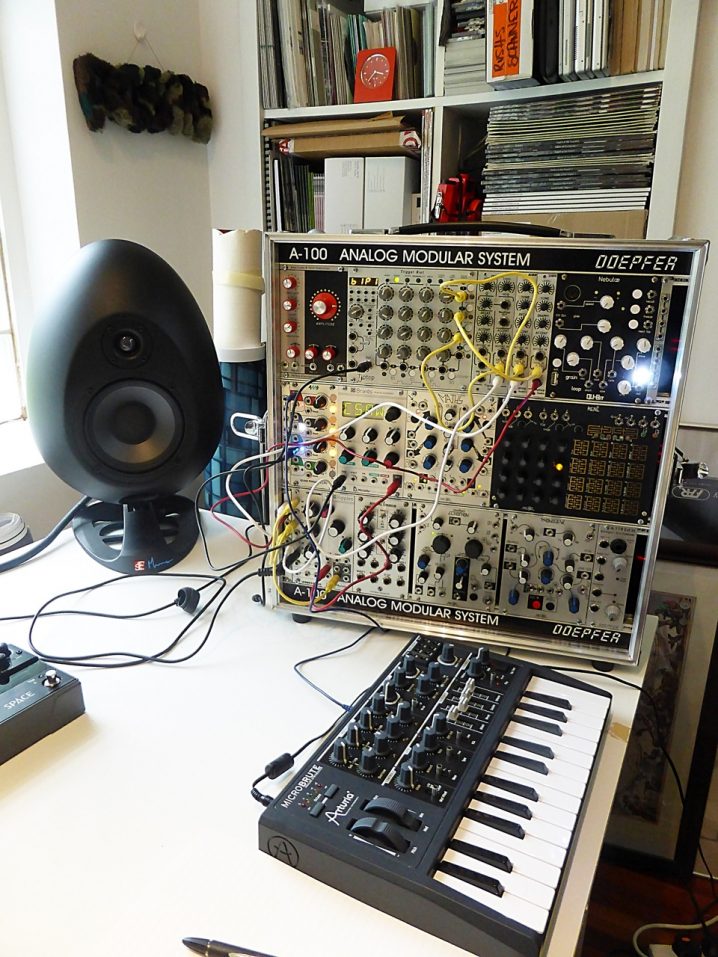 Is there a particular piece of gear that you’re just dying to get your hands on and do you think one day you’ll have it?
There’s already a lustful list of modular stuff that is intriguing me, especially items from Make Noise, Mutable Instruments and Intellijel Designs, but nothing beyond my budget. Tools are invaluable but I must lead the process, and don’t them to steer me too far from the creative process. I thankfully don’t have a list of impossibly expensive dream tools!

What does your live setup look like, and what do you bring with you when you travel for an extensive tour?
Firstly I don’t tour. I last toured as an artist over 14 years ago and have been retreating from live performance increasingly over the last couple of years, battling with personal questions of the value of electronic live performance and so on, a discussion much too deep to explore in this forum. Having said that I continue to play singular shows at certain events and festivals and travel with a very modest system. I will use my Mac Pro Laptop, a keyboard controller, Alesis and Eventide effects, a small mixer, a Pulsar controller and MIDI interface and whatever other tools lend themselves to the success of the show. At present I’m working on a project in France where I additionally play guitar so then travel with my Line 6 Variax guitar and additional pedals. 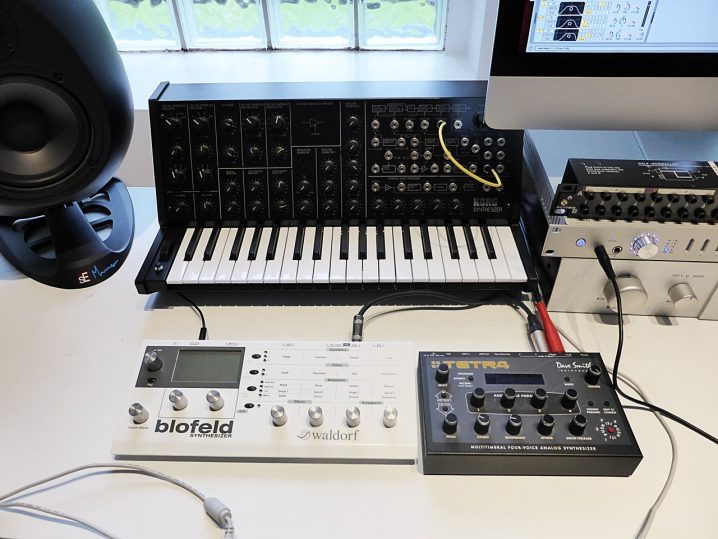 What is the most important environmental aspect of your current workspace and what would be a particular element that you would improve on?
I had a desk to work at that was built so I don’t sit down all day working in the studio. It’s at a height when I can happily stand beside it and work which is better for posture and energy levels. It’s a very precise and tidy space and those that know me recognise my organisational skills and efficiency so the studio needs to mirror these qualities so I have everything to hand there and easily accessible. There are additional shelves built on each side of the desk and on the adjacent walls that carry manuals, other gear, items relating to projects I’ve worked on (like Punkt telephones and alarm clocks, Phillips Wake-Up Lights and so on). The acoustics could be improved on but at present I’m in the process of negotiating building an underground bunker studio in my basement in an amazing 1000 square foot (100 square metres) industrial space so will await the outcome of that until I work on the acoustics better.

What can you tell us about your overall process of composition? How are the ideas born, where do they mature, and when do they finally see the light?
I’m extremely disciplined negotiating time and deadlines. I have never missed a deadline in my twenty year professional career. I wake early and work all day until 18.00 at the very latest, then close the door to the studio. I won’t work in the evenings, nor at the weekend. It’s important to value your private space and I know that my wife appreciates my commitment to her too 😉

I will work on emails early in the day, then visit the studio before lunchtime and work the rest of the day after that. Even lunch takes place around the same time each day. Yes, I’m so un rock ’n roll 😀 and yes, I DO go to bed early too. I recognise that it’s essential that you take care of yourself if you want to continue being content and creating work that inspires others too.

Composition is a fairly natural process. I’m frequently intimidated working on commissioned work but once I begin and add the first few notes to a work, be it a film score or a ballet soundtrack, then the process usually develops very instinctually. I have a massive archive of recordings though, certainly over 600 hours of unreleased material, much of which I have little recollection of in fact, and it’s only on rare occasions when I casually listen through to some old material do I realise the true value in holding on this all. As for this work seeing the light of day, perhaps not during my lifetime! 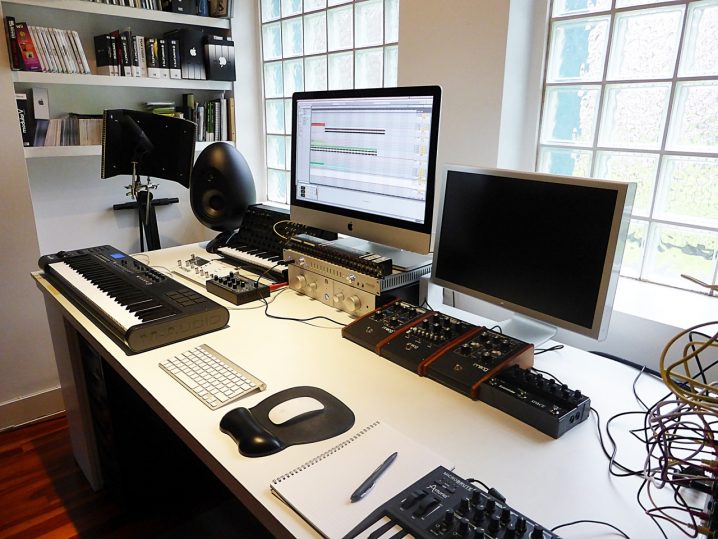 After the piece is complete, how do you audition the results? What are you reactions to hearing your music in a different context, setting, or a sound system?
A skill I’ve learned over the years is often to listen back the next day, then again from another room, to hear music through the walls of another space can be very telling about a mix. Listen on headphones, on different systems to gauge how it all works best.

I was working in Italy a couple of years ago and heard the DJ mixing some marvellous music and approached him regarding one of the tracks which I was finding especially appealing. On answering he held up the record sleeve only for me to recognise my own name. How incredibly embarrassing yet amusing since the context was so utterly outside of how I’m accustomed to ever hearing my work played. I just tried to act cool and walked away nonchalantly, desperately hoping that he wouldn’t have recognised me!! 😉

Do you ever procrastinate? If so, what do you usually find yourself doing during those times?
I actually see no issues with procrastinating in any way. It’s very easy to consider this a negative thing but often taking a break can be invaluable, offering up a new space to think, to rethink a process. For all of us it’s impossibly easy to distract ourselves with online activities, to answer an email, but life is about balance. I’m fortunate to be able to have an expansive library of music and books so can happily take a break to listen or read something inspirational or distracting, to take me away from the moment. Stopping work by 18.00 is also significant as it maintains a balance with my wife, my other friends, with dinner and attendance of concerts and cinema too, which are frequent ways of engaging with work yet from a distance.

As this new column continues to evolve, I intend on improving some of its aspects. For example, as of this installment, none of the images have been resized, and you can click on the photos for a larger view of the equipment. I plan on revising the previously published entries to include original photos as well. Drop me a line if you have any other suggestions! ~HC