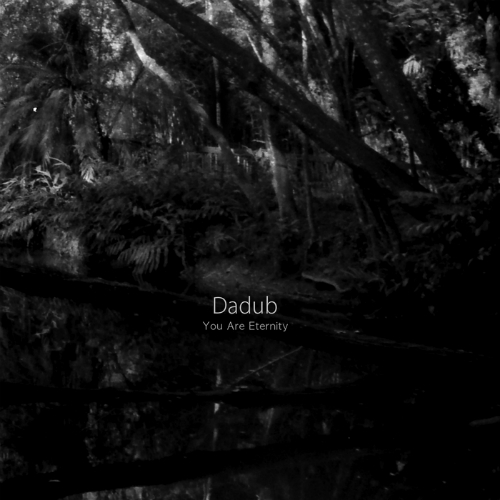 I find it intriguing when record labels focus very specifically on a particular sound, and in the case of Stroboscopic Artefacts it is minimal techno that veers into dark corners of rhythm and noise, much like the music of the label’s creator, Luca Mortellaro releasing under his moniker, Lucy. A fairly humorless, dark dirge every time, with a variable as to how dancefloor compatible releases are or are not. It’s my opinion that this all traces back to Pan Sonic’s Kulma album from 1997; it strikes me as the genesis for much of this music, though often times there’s an emphasis on dancefloor accessibility that never seemed to interest Pan Sonic all that much (beyond their initial album as a trio).

Dadub’s You Are Eternity is a lumbering beast of an album, but it squarely falls in line with what I’ve just described. All of the tropes are here — dense, drippy atmosphere, thick, punchy, staggered kicks and noise, very little in the way of melody, and only occasional uses of human voice samples to brighten the sonic palette. That said, it’s a pretty fantastic ride. Whether the sound is totally abstract and freeform (“Unbroken Continuity”) or bobbing in time (“Circle”), the vibe of the album is consistently dark and dense; it sounds especially good on headphones with the volume cranked, but this would also sound pretty great on a big PA, with a physicality about its tracks that often is likely to force bodies to move.

“Recorded over a period of two years, but containing fragments and ideas that stretch back a decade ‘You Are Eternity’ has been mixed together to form a continuous piece rather than twelve discreet tracks. The effect? An immersive journey that encompasses the descriptors brutal, ferocious, ambient and aqueous.”

The slow halfbeat of “Transfer,” made in collaboration with King Cannibal, is perhaps the ferocious centerpiece of You Are Eternity, with rhythm that sounds more like a series of fierce collisions than beats. The only misstep for me is “Truth,” which relies heavily on samples of men talking about the stock market, something which somehow seems not only unnecessary but out of character with the rest of the album [editor’s note: “Truth” happens to be HC’s favorite track on the album, exactly because the darkness of sound mirror’s the world’s deeper woes]. In contrast, one of my favorite cuts, “Death,” completely soars without the need for any topical sampling; its cloud of drones and punchy syncopation do the work.

As far as techno albums go, this one falls pretty far off from the dancefloor, more concerned with intricate beatmaking, dense atmosphere, and a consistently dark mood. The reason the album works so well is that Dadub [which is actually a duo of Italy natives, Daniele Antezza and Giovanni Conti] is apparently relatively unconcerned with being DJ-friendly and instead freer to explore other less traveled terrain, no less physical or visceral. It’s more like a trudge through the wild, with crags and crevasses and unpredictable foliage — seething with life but decidedly feral. Check out Dadub’s previous EPs on Stroboscopic Artefacts: Way To Moksha (2012), Preternity (2013) and Untitled (2013).