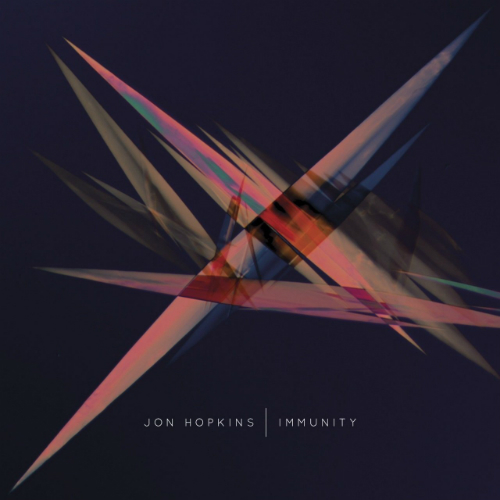 Jon Hopkins has lingered in the outskirts of fame for some time, working with high-profile acts as disparate as Imogen Heap, Brian Eno, and Coldplay in the last ten years. His talents as a producer are varied and refined, as anyone who heard Imogen Heap’s music or Eno’s Small Craft on a Milk Sea (Warp, 2010) can testify [one of the most perfectly executed electronic albums of the last several years], and yet his style is fairly distinct when it comes to his own solo music. His 2009 album under his birth name, titled Insides (Domino, 2009), was a glitchy hybrid of tweaked IDM beats, bass music flare, and sensitive cinematic scoring, but on his follow-up [his fourth solo release up to date], Hopkins has streamlined his sound to focus on a four-to-the-floor beat and a rawer, more physical sound.

The results are staggering, especially when he lets his ideas run free for over nine minutes at a time. “Open Eye Signal” is the first single from Immunity, and after the glitchier swagger of opening track “We Disappear,” its immediacy and urgency make it a real highlight and sign of how tightened up Immunity is compared to Insides. “Open Eye Signal” incorporates a visceral rhythm section with dreamy, swooning synth pads, sounding like Boards of Canada on mescaline. “Breathe This Air” combines his knack for sweet, almost sentimental motifs with a more coarse dancefloor sound; it’s this combination of grit and tenderness that makes Immunity so powerful throughout. The bite of distortion and effects on his drums and bass throbs shifts the mood away from being too syrupy and instead becomes a really provocative push and pull between those worlds. “Collider” picks up where “Open Eye Signal” left off, another really infectious groove that ascends by way of its massive wall of pads that builds over time.

“The first sound on Immunity is that of a key turning, unlocking the door into Jon Hopkins’ East London studio. It’s followed by the noise of the door slamming, then footsteps, and then finally the crisp, clipping rhythms and pulsating bass of ‘We Disappear’ emerge, signposting the most club-friendly music Hopkins’ has made to date. So begins a confident, dramatic record defined by this acute sense of physicality and place…”

The album is certainly front-loaded with these jams, while the second half has more room to breathe. That contrast is actually somewhat of a relief, even if all of my favorites are among the first four tracks. “Abandon Window” drops out the low end completely for some introspective piano that gives way to vibrating pads, a nice palate cleanser that precedes the grimy shuffle of “Form By Firelight,” sounding perhaps most closely aligned with Insides . This skittering combination of seemingly syncopated objects and surfaces with lush cinematic arrangements overhead reflects that same push and pull I referenced earlier; even when the tempo varies and the mood differs, it’s that sweet contrast of juxtaposed sounds that is at the core of such a compelling body of work.

The only overt dancefloor gestures in the second half of Immunity appear in “Sun Harmonics,” a track that lives up to its name, with a brighter disposition that would make Âme proud, tinges of neo-trance coming through like rays of sunshine through parted clouds. At twelve minutes, it’s the longest track, and the one which Hopkins lets things wander most freely, with fairly conventional underpinnings that support its ideas. The title track is a breezy downtempo number, a comforting notion that after all of the emotional turbulence and physicality that’s preceded, “Immunity” is the result — protected and insular.

Hopkins takes us into his world and for an intense ride, but we’re safe from harm in the comfort of his musical ingenuity. Highly recommended. I saw Hopkins bring these tracks to life during his North American tour with Clark and Nathan Fake, and it was well worth it — a moving experience.