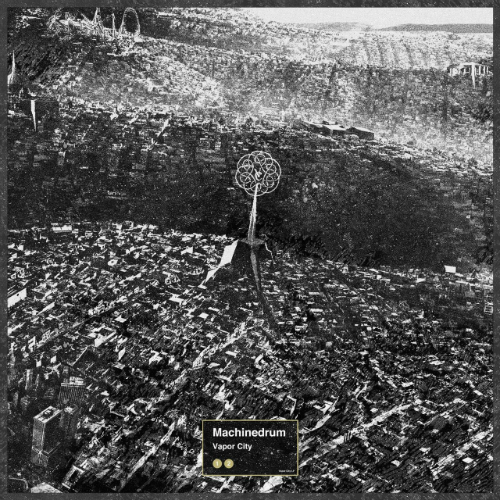 Travis Stewart’s follow-up to his stunning 2011 album Room(s) (Planet Mu, 2011) has taken some time to win me over. One reason it’s taken time to take hold of me is that Room(s) really wowed me in just how wildly different it sounded to me from Machinedrum’s early 00s material; I’d missed at least a couple along the way, and so I still had associated his sound largely with Prefuse 73-esque cut-up hip hop and downtempo tracks. Vapor City builds on the same lush palette of sounds Stewart explored with Room(s) and with Praveen Sharma as Sepalcure, touching on a variety of micro-genres like footwork and juke but this time fusing them with different elements like nods to jungle and chillwave.

Fans of Room(s) will find a lot to like here, and the shifts Stewart has made in his production are incremental and measured. Still, the skittery breakbeat of drum & bass is pronounced even as it takes a backseat to the uptempo bass music motifs that characterize many of its tracks. He also continues to exploit pitch-modulated vocal fragments and phrases in a way that is sounding less fresh every time to anyone who was surprised by Burial’s debut, but that doesn’t matter to me; the vocals always service his arrangements for the better, in my opinion. And so any lack of a powerful first impression is made up in patient listening with some really intricate production and effective arrangements.

A true electronic music Renaissance man, Machinedrum blends together current pop music standards and trends with his own extensive knowledge of experimental production techniques, delivering his quality signature on every thing he touches.

It’s also a very wise move that Stewart culled the track list down to only ten out of a purported 70 or so pieces he made in these sessions (the version I have includes a bonus track, “Overcome”). Only in closing track “Baby Its U” does it sound like a retread of his last outing; it certainly has plenty in common with the plucked and strummed guitar fallout of Room(s)’s “Come1,” but here it works quite well as an extended conclusion to the album. Elsewhere, smooth jam sounds find their way into subtly infectious tracks like “Center Your Love” and the downright jungly “Infinite Us.” At the core, though, Stewart’s knack for ascending chords and change-ups really guides the album. The most inspiring track of all perhaps falls in the center of playback; “Rise N Fall” soars with its nervous rhythm section and gliding vocals over a really satisfying low-end bassline. A downtempo chill-out track like “U Still Lie” is well positioned, preceding the more harrowing, frenzied arrangement of lead single “Eyesdontlie,” another stand-out among many.

Vapor City is another triumph from where I sit, an album that is best approached with a good pair of headphones and some patience to let it surround you. I’m curious to hear the trickle down of his other tracks — supposedly he may release more EPs or web-only content from these sessions — but as a fairly concise grouping of tracks and ideas, Vapor City is another resounding success. As you may have already guessed, with this release, Stewart moves from Planet Mu to Ninja Tune, which immediately books him for a 30+ city tour in support of the album. HC managed to witness this live performance out at Seattle’s Decibel and it was indeed one of the highlights of the festival.