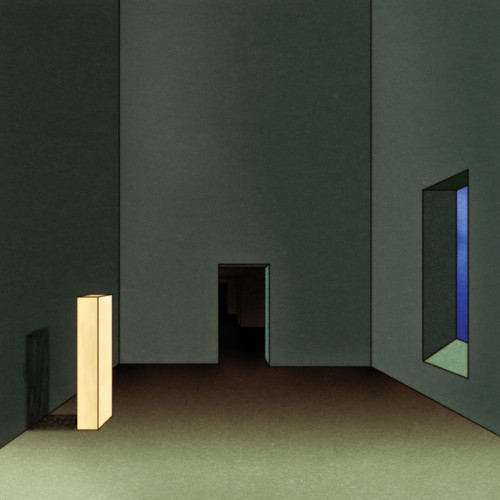 Daniel Lopatin migrates his Oneohtrix Point Never alias to Warp for this ninth (!) full-length album of electronic curiosities, and it’s a smart move. As his sound continues to shift focus and sensibility, it’s only fitting that the project moves laterally within the electronic music community in terms of a label to release its music. The sound of R Plus Seven is substantially different from its predecessor, Replica (Software, 2011), and even more so from Returnal (Editions Mego, 2009). The palette of sounds is largely around synthesized instruments and vocal synths and samples, things Lopatin’s played with in the past, but in a rather different way here. He sounds just as restless as ever, but these pieces are playful and joyous, bristling with energy as vocal cut-ups and samples flit around the mix.

Whereas Lopatin & Ford’s work on Software strikes me as overly schticky and self-consciously nostalgic (to a fault), R Plus Seven does not. There are nods to 80s computer genesis but without any of the clichés; there are no overt nods to John Carpenter, Giorgio Moroder, Linn drum R&B, or Duran Duran. But there is something quintessentially 80s and MIDI music about the plink plonk of “Problem Areas” or “Along,” with their synthesized voices and fake flutes and sax sounds — refreshingly, though, it’s not reference intended as a means to an end. This is not nostalgia for the sake of it, but it is transportative in ways that feel both backward and forward-looking, mirroring the past but tweaking and altering it in ways that are often unpredictable.

The biggest distinction I made from the previous Oneohtrix albums I’ve heard (which only include the most recent couple) is clarity. These tracks showcase arrangements that are clean and clear, almost never diving into the hazy distortion of Returnal and instead emphasizing arpeggios, patterns, and sounds in the foreground. The cyclical patterns of “Boring Angel” and “Americans” that lead off are an accurate representation of what to expect in these ten interesting explorations, but there are plenty of surprises along the way.

The strange sputtering vocal bits of “Americans” that divide its first and second halves, for instance, are a welcome change, as are the weird synth voices and edits of “Inside World.” One of my favorite tracks is “Zebra,” falling in the center of the playlist, built largely around stuttering snippets of sound and chords, then evolving into a rich, layered tapestry of voices and sounds and ideas. It sounds to me like a convergence of technology both old and new, eventually mellowing into a more patient, leisurely vibe.

With R Plus Seven, Lopatin freshly succeeds in evolving musically, exploring some truly interesting and unique sounds while still remaining surprisingly accessible. In 2013’s electronic musical landscape saturated with talent and output, it’s a delight to hear such a singular and unique voice getting only stronger and more interesting. The album, by the way, is mastered by Valgeir Sigurðsson. The cover art is by George Schwizgebel, taken from the film Le ravissement de Frank N. Stein (1982). The release is available as a CD and a 2xLP, republished in Japan by Beat Records.