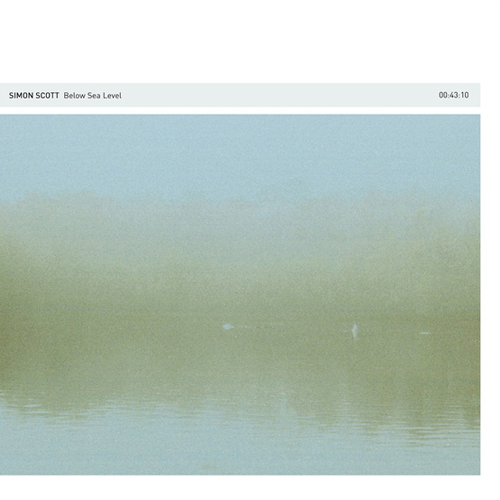 I am camping by a marshland. Sounds of birds, insects and frogs fill up the landscape with their endless foreign conversations. What else are they saying that we can not hear? I am sitting by a fire, an engine passes by, and Simon Scott is playing his guitar. From simple and gentle strumming to his signature hazed out reverberations, the tones blend in a pastel palette of ambiance, organic in every small step of the way. The field recordings barely dominate the soundscape, asking the listener to move in closer. The presence of nature throughout the album shrouds the elegant atmospherics into one sonic ecosphere. And Simon Scott plays on…

Below Sea Level is Scott’s fifth solo album, and it’s his first for Taylor Deupree‘s 12k label. In a way, that alone is somewhat of an accomplishment, in my humble opinion, because that’s where Scott belongs. The relationship of music with nature has been previously examined throughout the label’s vast catalog, and Scott adds another notch to the label’s exquisite roster of artists. The seven tracks on the album explore the “desolate and controversial environment” of the Fens in East Anglia, UK. This place, visited by Scott as a child, is captured with hydrophones, custom-built recording devices, and synthesized sounds. These textured layers were recorded throughout two years, as Scott returned to the former wetlands to probe inner memories for “nostalgic familiarity”. These lands are indeed below the sea level, from which the title of the album is derived.

“Below Sea Level explores the aesthetics of active listening and, via a self-built MaxMSP patch, digitally disects the natural and man-made recordings Scott discovered within the Fens. The juxtaposing of analogue and digital timbres and textures, the man-made and natural world sounds, create epic interwoven soundscapes that blend the recognizable (eg.: birdsong) with undistinguishable sounds, sometimes confusing what is natural and synthetic. Scott presents an abstraction of a place that is arranged and manipulated for aural contemplation outside of the Fens (in alien environments) where the music collaborates with each unique listening environment.”

The release is accompanied with an 80-page color hardcover journal which includes an essay, “Exploration of the Subterranean Fenland Environment”, written by Simon Scott. Besides the notes and sketches, the booklet comes with photography from the area. The entire package demonstrates the artist’s dedication to the subject matter, explored through a diverse medium – yet another reason why this album must be owned as a physical copy. While you’re browsing around the 12k shop, I suggest you drop in your cart a copy of Kane Ikin‘s Sublunar and Taylor Deupree‘s Faint. And don’t forget to check out Scott’s Navigare (Miasmah, 2009) and Silenne (Slaapwel, 2010). Definitely recommended for fans of Marcus Fischer, Pillowdiver, and Richard Skelton.