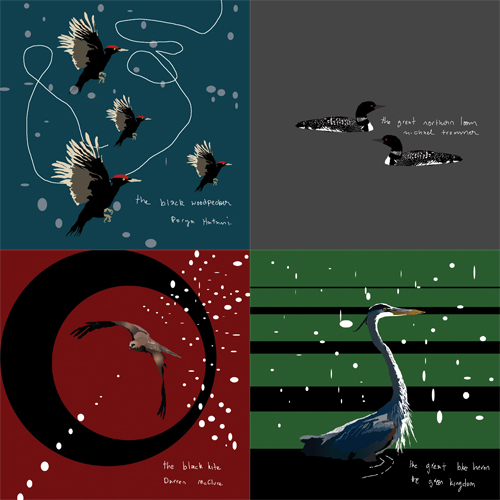 Fans of nature, field recordings, and more importantly the sounds of birds will be delighted with this new series from a small Australian independent label, Flaming Pines. I last brought your attention to this imprint run and operated by Kate Carr, with a review of another similarly themed series, Rivers Home. Where the last set of limited run three-inch CDr releases focused on rivers of the world, the latest Birds of a Feather project is dedicated to (as you may already have guessed) the birds. This series celebrates the beauty, fragility and sounds of birds, as well as integration thereof in music.

“The role of birds as muse, as musical guide and inspiration has been well documented in classical music, from Mozart’s pet starling to Beethoven’s birdsong filled Pastoral Symphony and Sibelius’s swan hymn to Messaien’s birdsong compositions.”

The current roster of artists contributing to the project includes Porya Hatami, Michael Trommer, Darren McClure and The Green Kingdom. The four artists explore the themes around birds local to their environment, and so we have the four stories of The Black Woodpecker, The Great Northern Loon, The Black Kite, and The Great Blue Heron respectively. Each release from the series comes with a double CDr set, featuring a single track each, clocking in around the eighteen minute mark. The tiny 3″ square insert contains a short story from each musician and their relation to the bird.

Such is the case with Darren McClure‘s piece, who currently lives in Matsumoto, Japan. The track opens up with a field recording near the Naraigawa river, featuring the sounds of the running water, surrounding atmospheres, and Black Kites, as they fly between the mountains and the river looking for food. The piece itself is a gentle drone with soft guitar strums, various bells, and a few synthesized manipulations, slowly evolving over the allotted seventeen minutes. “I do a lot of field recordings along this river area, and so included environmental sounds as well as the sounds of the kites themselves in this piece, as the two are so connected in my mind,” writes McClure in the included story.

Mike Cattone of The Green Kingdom makes us travel to Shelby Township in Michigan, USA. The flowering ambiance stretches over a vast soundscape as Cattone builds layers of pads, tiny clicking vinyl pops, and strums of acoustic guitar, in an attempt to capture the scale, elegance and mystery of the Great Blue Heron. “Watching such a large bird with an impressive wingspan fly overhead almost takes you back to prehistoric times,” writes Cattone. “One realizes how truly unique and precious these creatures are, and how we must make every effort to maintain adequate habitats for them to flourish.” This is a gorgeous piece that true fans of The Green Kingdom will enjoy in its entirety.

Then we’re off to Toronto, Canada, where Michael Trommer invites us to hush down, and quietly eavesdrop on the sounds of the Great Northern Loon, recorded from a canoe on a late summer night. The volume rises slowly as our aural eyes adjust to the darkened skies, and now we can make out the bird sounds among the symphony of insects, frogs, and other nocturnal animals. “The eerie cry [of the Great Northern Loon] is likely the reason for the bird’s prominence in First Nations’ legends, where it often appears as a messenger or world-creator,” writes Trommer for this deep, minimal and incredibly restrained piece, which, I think, fans of Chris Watson will really dig.

Finally, Porya Hatami takes us onto a journey in celebration of the Black Woodpecker. Hailing from Sanandaj, Iran, Hatami creates organic soundscapes of earthly domains peppered with the percussive sound of a woodpecker. “I have always been fascinated by the sound of this amazing creature and its weird nature of finding and eating food,” writes Hatami about the bird of choice, whose population range spreads from Europe to Asia [and yes, Iran]. On the piece, the warm sweeps of environmental sounds gracefully blend with minimal electronics, acoustic manipulations, and of course, field recordings, making this a wonderful introduction to this Iranian sound artist.

Overall, Flaming Pines curates an enchanting journey into the world of birds, making us appreciate their existence, the role they play on our human life, and indeed inspiration. Another beautiful touch to this collection is the gorgeous artwork by Kate Carr depicting the birds in each installment. Add to that the incredible mastering by Taylor Deupree of 12k, and you’ve got a little treasure that you’ll keep for the years to come. I recommend you grab this limited run series if you can!