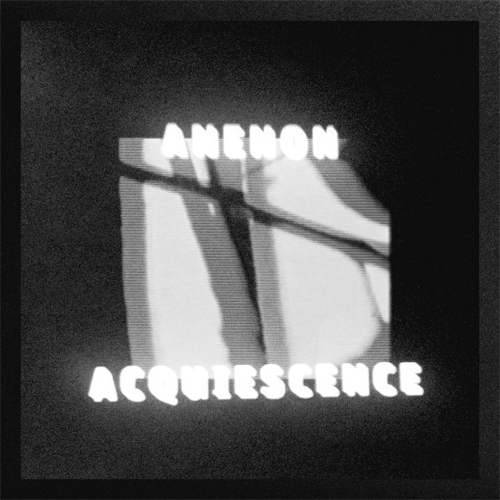 Every so often you stumble across a release about which you have no real preconceptions, that seems to come out of nowhere and knock you off your feet. Acquiescence is just one of those records. Acting as a short precursor to the recently released Inner Hue, it’s a relatively diminutive EP at seventeen minutes but in that brief period Anenon manages to take the listener into a multitude of different spaces. Overall the release speaks of an unflinching honesty; as you are led through each of the meticulously orchestrated soundscapes there is scarcely a false moment.

If one was to try to appreciate what it is Anenon’s first full-length EP tries to share with its listener they could do worse than to look to its opening track. ‘Clairvoyance’ is a restrained build of only a few looped chords accompanied by a gathering tremor of inorganic percussion that builds to a firm and decisive peak. And this really is indicative of the release as a whole – in terms of production Acquiescence is a skilful blend of low-passed instrumentation and granular textures that bridges the gap between ambient soundscape and more energetic electronica, offering something graceful yet rapturous.

One of the most appreciable qualities of Acquiescence is how beautifully balanced it is. Whilst it contains plenty of darker and more subdued passages it also doesn’t shy away from the fact that it is primarily an EP about hopeful equanimity. Tracks like ‘Twenty Twenty’ act like a paean to the purer emotions. Taking the form of a slow crescendo of bright string harmonics and meditative pedal notes accompanied by the scrape and rattle of some minimal percussion, it doesn’t so much progress as gradually unfurl. Again ‘Equilibrium’, a measured but escalating piano ostinato, doesn’t attempt to assault the senses; instead it invites the listener to capitulate and allow the sonorous melody to penetrate their defences.

It is an unfortunate truism that sometimes working with complex acoustic textures can make an artist treat their rhythms almost as an afterthought, scared of potentially obscuring their carefully tailored soundscapes with a beat that dwells too far forward in the mix. Gladly Anenon’s Brian Allen Simon has no such affliction. The EP’s title track ‘Acquiescence’ is a particularly striking example, blending a syncopated two-step rhythm with a simple piano melody and string harmonies. It’s a wonderful balance of crisp percussion and moody classicism that is crowned by perhaps the most exquisitely produced reed samples you will ever hear; sculpted in a manner that is oxymoronically both glitchy and organic, they make a stirringly disjointed counterpoint to the track’s main refrain.

Innocent as it is, it seems almost mean-spirited to find fault with Acquiescence. Whilst it isn’t without fault one can’t help be charmed by such a pleasingly empathic release. And this is perhaps what makes it such a winner. Acquiescence doesn’t beg for your approval. At no point does Anenon attempt to wow or overcome its audience with showy displays or stagey trivialities. Instead he simply uses it to share the music he loves.