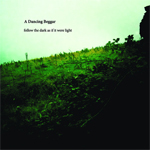 For my first official review in Headphone Commute’s new headquarters, I set up my gear, treated the room with some books and some rugs, closed all doors, tunnels and mouths, and slipped into my meditative listening place of pressure levels, frequencies, and vibrations. I used to believe in pure luck, in coincidence and in serendipity. Now I just flow… I pick up my next album to review not because of this or that, but because I just simply pick it up. In this spirit of unfolding events I arrive at a new album by A Dancing Beggar. Or so the story goes…

Follow The Dark As If It Were Light is the sophomore release from James Simmons. Previously self-releasing What We Left Behind (2009), the seven track followup lands on David Newman’s Audiobulb Records. Words like “lush”, “ethereal”, and “atmospheric” bubble on the surface of my cranium, but instead they are subdued and let to rest beyond these structures known as words. Genres like “ambient”, “shoegaze”, and “post-rock” want to suffocate the listener’s perceptions, slot the album in a bin, and file under a plastic label, but instead they melt away, and let the music simply stream, from Simmons’ consciousness to yours.

But if I had to classify the album, or rather add it to the playlist of my favorites, it would certainly play nicely along with Hammock, Slow Dancing Society, The Ideal Setback, and Bitcrush. The tracks on the album (as does the output from the artists mentioned above) approach each passage with a soft palette of acoustic loops, field recordings and harmony rich soundscapes, often executed with the aid of a guitar, a few effects pedals, and perhaps distant soaring vocal couplet. Crashing waves, epic synths and reverberated strings – each evoke a feeling of euphoric bliss, a sun ray’s kiss, a late night summer breeze. Musical poetry in the making, unfolding on the stage of life. And through these notes a deep and profound connection is made between a messenger and a receiver. That is the power of music.

Read Two and a Half Questions with A Dancing Beggar