Let’s start at the very beginning. Can you tell us how you got involved in composing, and what was your very first piece of gear?
Before getting into composing music, I was a drummer and played in a death/doom metal band. I really didn’t consider making my own music until I got introduced to DAWs. Working with a DAW really helped me put the whole process of music-making in perspective as well as remove some of the limitations one used to traditionally have at making full-on tracks on one’s own. At first, it was FL Studio and after a while Ableton Live with which I’ve stuck to the date. So, I suppose my first gear was my computer, equipped with the software.

How many different studio iterations have you gone through, and what does your final setup look like right now?
In my view, they are not as many iterations as they are progressions because I’ve merely managed to add a handful of gear to my setup, and not until very recently for that matter. I’ve been mostly working with software and haven’t used hardware as much. I did get a Kaoss Pad at one point and a Waldorf Blofeld at another but found myself going back to working with software despite possessing those hardware units. Recently and after I made my latest album, I purchased two pieces of Elektron gear (Analog Four and Heat) which I’m really excited to play with. Those along with a MIDI controller comprise my current setup. 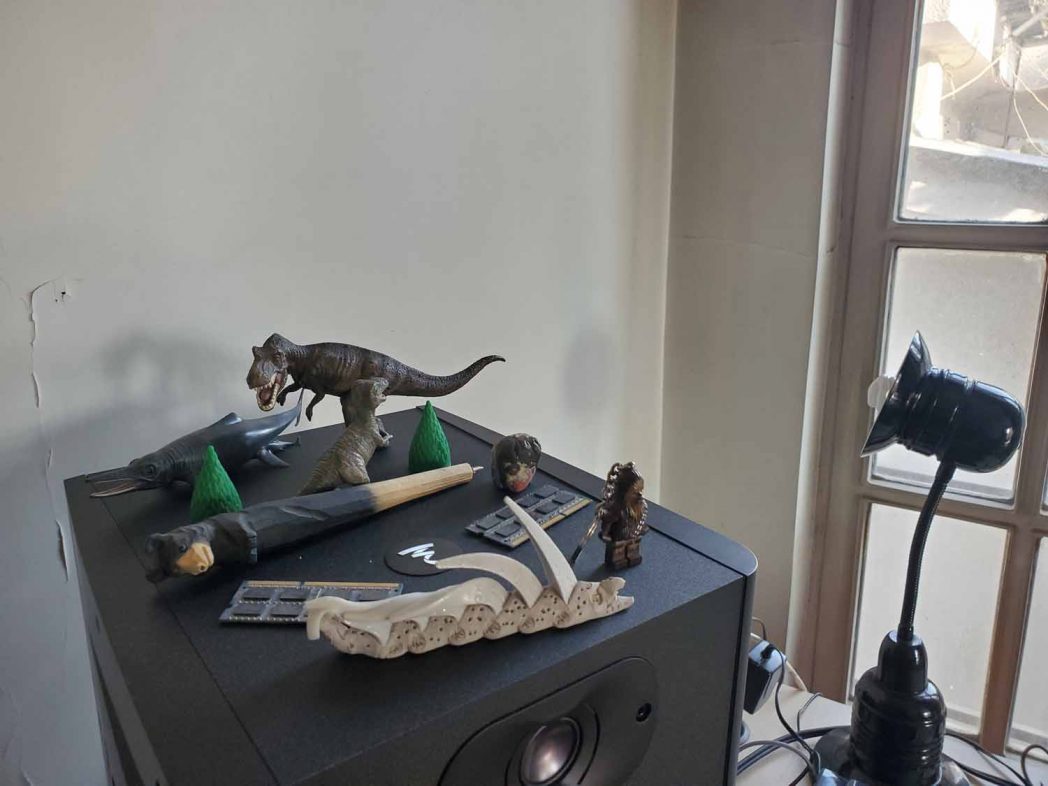 Tell us about your favourite piece of hardware.
Although being a very recent purchase, I’m loving the new Analog Four that I got. It’s a very capable piece of machine with fierce sounds and flexible controls.

And what about the software that you use for production?
I frequently use Ableton Live as my main canvas. I mostly tend to use Ableton’s native plugins but occasionally utilize 3rd party plugins too.

Is there a particular piece of gear that you’re just dying to get your hands on and do you think one day you’ll have it?
I wouldn’t mind having other Elektron products, to be honest 🙂 More in order to try out the complete ecosystem that Elektron has envisioned for its users and see what they are all about. It would also be nice to own a couple of hardware effects units that either do experimental sounds or more traditional effect processes which I usually utilize in software land. For instance, I’ve heard good things about Jomox T Resonator, Arkive_Effects_ The Dust Collector, and Empress Echosystem. 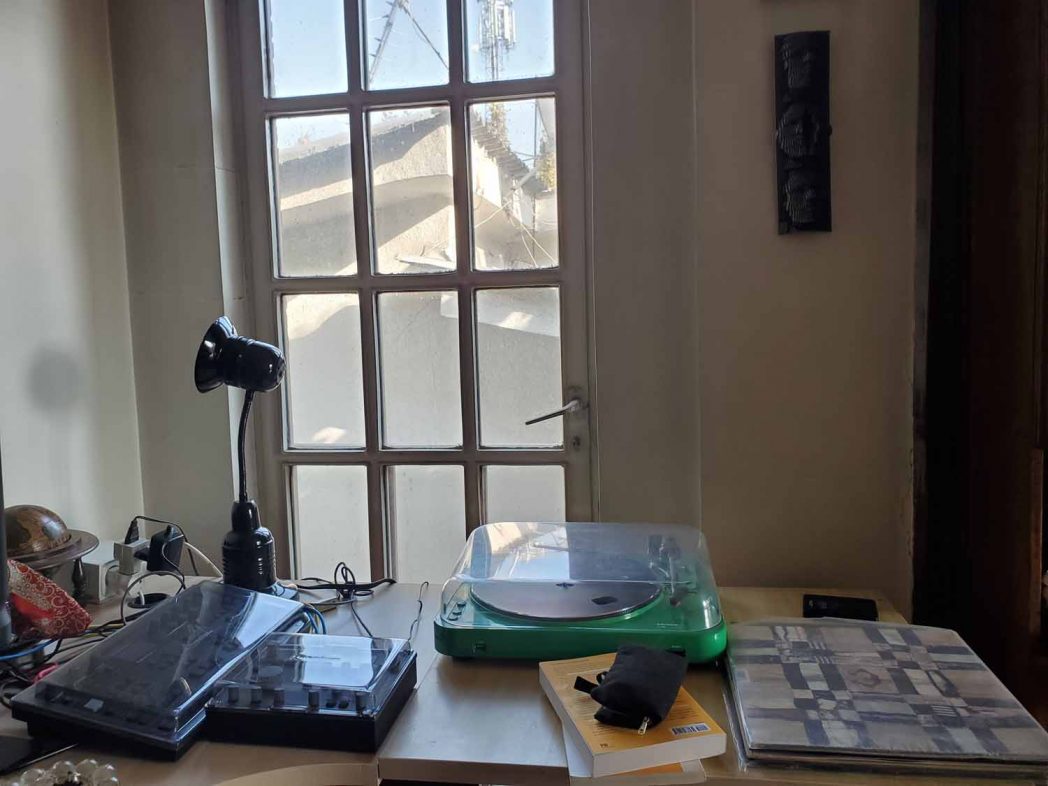 Can you please share some aspects of sound design in your work?
I’m a big fan of multi-layered sound processing and resampling. I do that with almost every sound I make, sometimes to the extent where the initial patterns and sounds are unrecognizable. I presume it’s pretty evident from my music that I abundantly love distortion and saturation effects too. I also have a habit of playing around with un-routine routings when it comes to FX racks which sometimes result in weird, yet pleasant, sounds. All in all, I find a lot of joy in post-FX processes and tend to experiment a ton with various effects when attempting to design sounds and figure out my sonic path.

Any particular new techniques that you tried out for your new album?
A particular technique that I had fiddled with before but tried to master in a couple of tracks in this album, is using random in-scale MIDI generators that go through random ducking processes (to make more complex rhythms) and then feeding the result into a drum machine or synth. I also utilized pitch-shifting effects at a couple of points in the album. What I found out is that even if you pitch-shift a sound up an octave and subsequently shift it down an octave, due to effects being imperfect, the result will sound different from the initial sound and usually this difference is an interesting occurrence that one can actually make use of. Other than that, I don’t think there was a technique particular to this album that I hadn’t used before in my previous body of work. 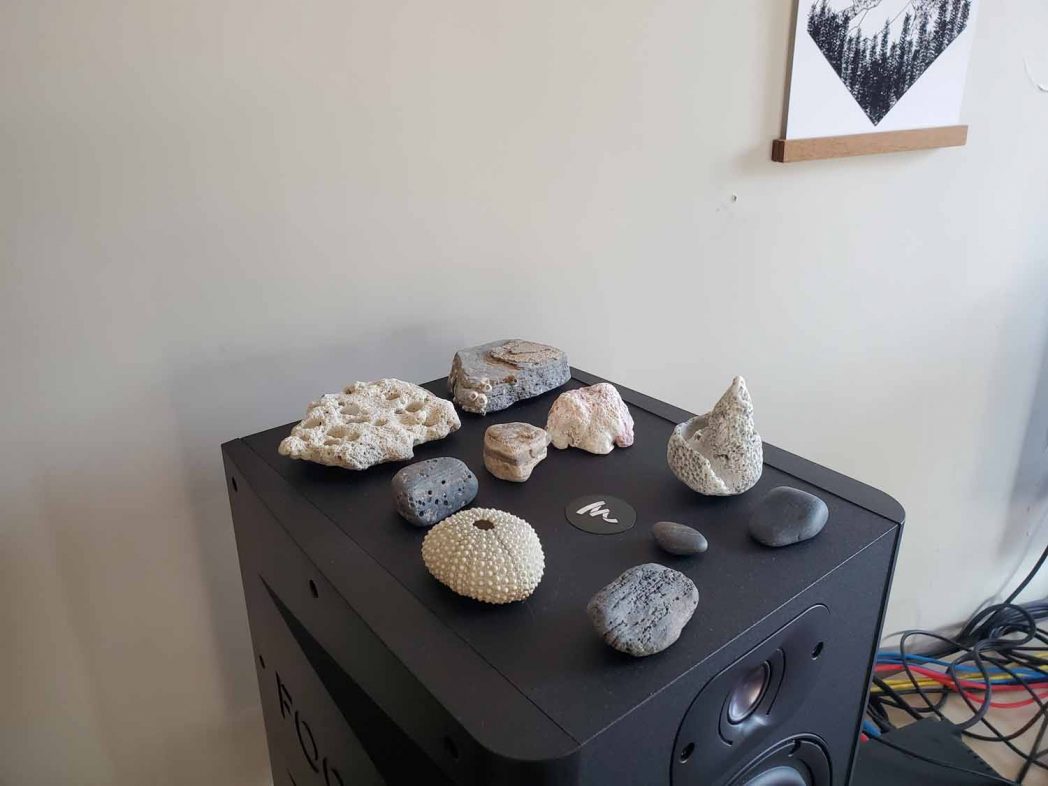 What does your live setup look like, and what do you bring with you when you travel for an extensive tour?
I haven’t been able to bring about an extensive tour yet. However, for the occasional live shows that I perform at, I bring my laptop along with Ableton and use a few MIDI controllers to trigger and control parts of my music. Sometimes I use a Kaoss Pad as well which comes in handy for adding more depth to the control that I have over my live sounds.

What is the most important environmental aspect of your current workspace and what would be a particular element that you would improve on?
I happen to have a pretty good natural light in my room and a nice balcony view which I really appreciate. As for improvements, I would love to work a bit more on the interior of the room and hopefully add more art and photos to the walls and the environment. 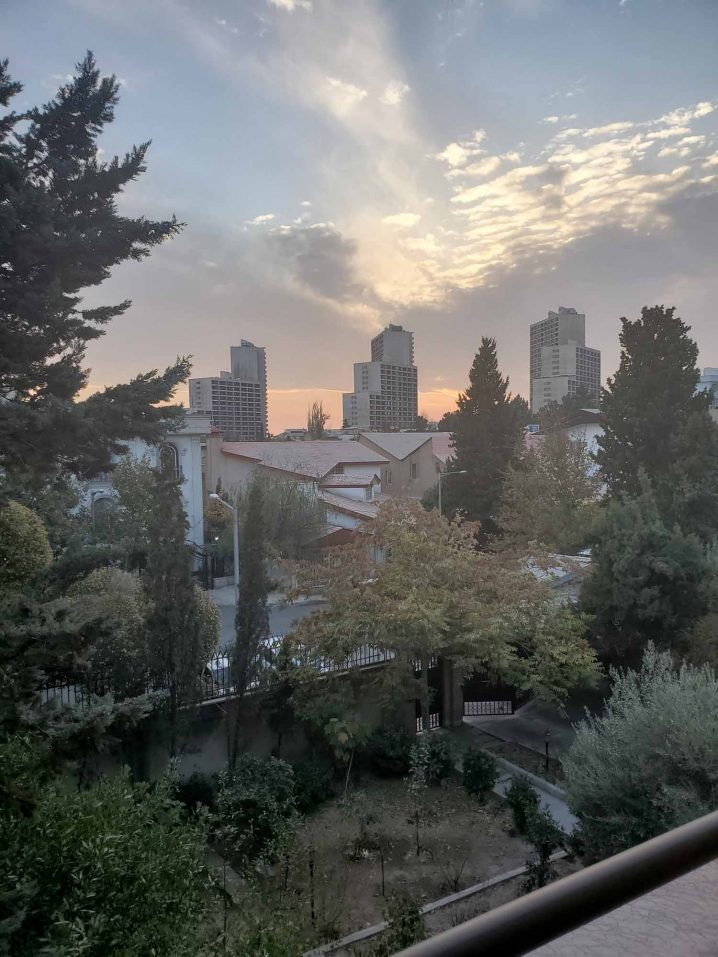 What can you tell us about your overall process of composition? How are the ideas born, where do they mature, and when do they finally see the light?
I usually have days where I just experiment with motifs. I play around with them and try to build on them. Through multiple sessions, the overall anatomy and sketch of a track are born. Only then can I decide whether the track appeals to me or how it’ll fit in the different series I’m working on at the time. Naturally, the moods of the tracks are highly dependent on my mood as well as the emotions I’ve collected from various inspiration sources. In case I perceive something unique or interesting in that particular track while finding it to be in sync with the other tracks (if in a series), I invest more time in that piece and try to expand it. And in the end, as in any other artistic process, some of the results are selected and others are filtered out for various reasons.

After the piece is complete, how do you audition the results? What are your reactions to hearing your music in a different context, setting, or a sound system?
As a single piece or series progresses, I try to audition it from time to time, less from a producer’s lens and more from an audience’s perspective. This process helps me get a better sense of the music and view it from a more distant and nonpersonal position which is more balanced in terms of impulsive decisions, resulting in the betterment of the ultimate outcome. That is, of course, aside from technical and mix-related auditions that I make either by listening to the music on various sound systems or by consulting with other musician friends of mine, who are always kind enough to hear my music and give constructive comments on it. 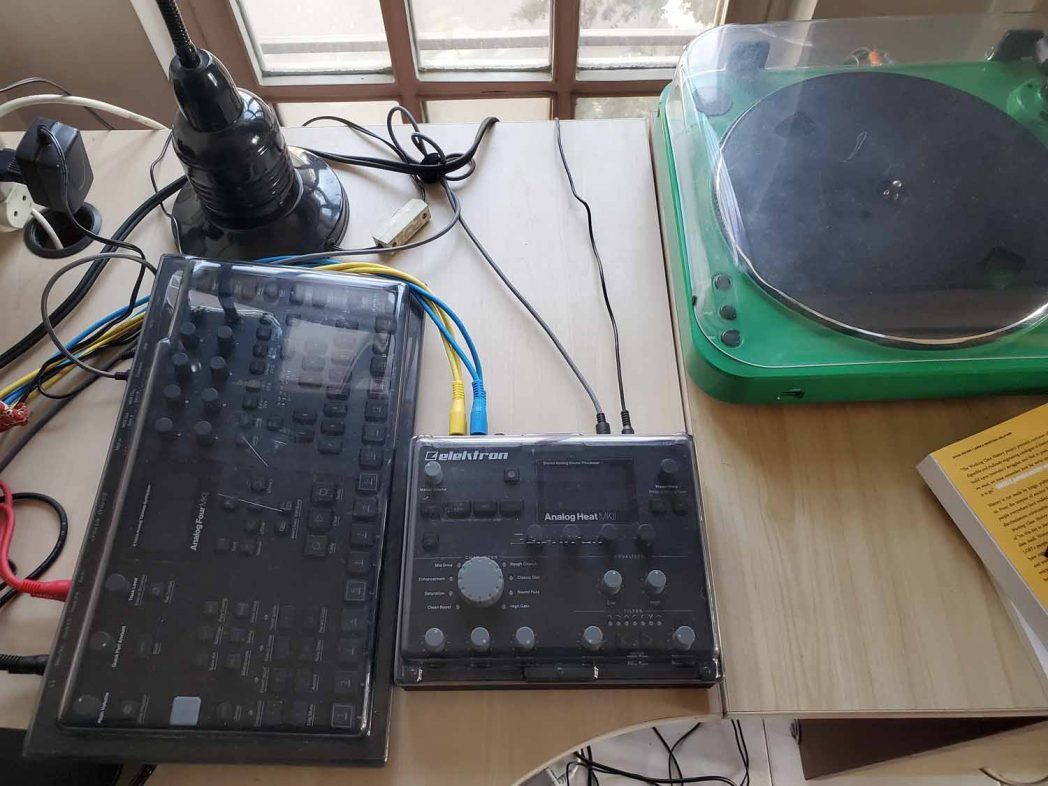 Do you ever procrastinate? If so, what do you usually find yourself doing during those times?
Yes, I do. And excessively too! Procrastination is one of the main reasons behind my somewhat slow pace when it comes to finishing and releasing music. A dear friend of mine once said: “I procrastinate a task by doing another already procrastinated one”. I try to follow that motto as much as I can 🙂 Fortunately, I do enjoy other activities such as Creative Coding (which I do as one of my vocations) among others and hope to be able to procrastinate working on music by attending to other interests of mine.

What gets you inspired?
In my daily life, I would say that I greatly get inspired by people and the human connections I have and make with others as I go on living. My music in particular is massively inspired by other forms of art and in specific story-driven narrational art. I think my music, to some extent, is narrational too which might be related to its progressive style. Although I’d love to be able to make more atmospheric and “still” music, I end up with something different most of the time. An example of these inspirations is my new release COLDSTREAM, which has a core concept that is heavily rooted in an Adam Curtis short which was aired as part of Charlie Brooker’s Wipe. As the project progressed, it spiraled out into a story of its own in my mind, but I think the inspiration is pretty vivid considering the sampled speech on the title track. Another instance is my first LP that was fully based on different episodes of an anime series by the title of Mushishi which had a profound effect on me when I watched it. And so on and so forth. 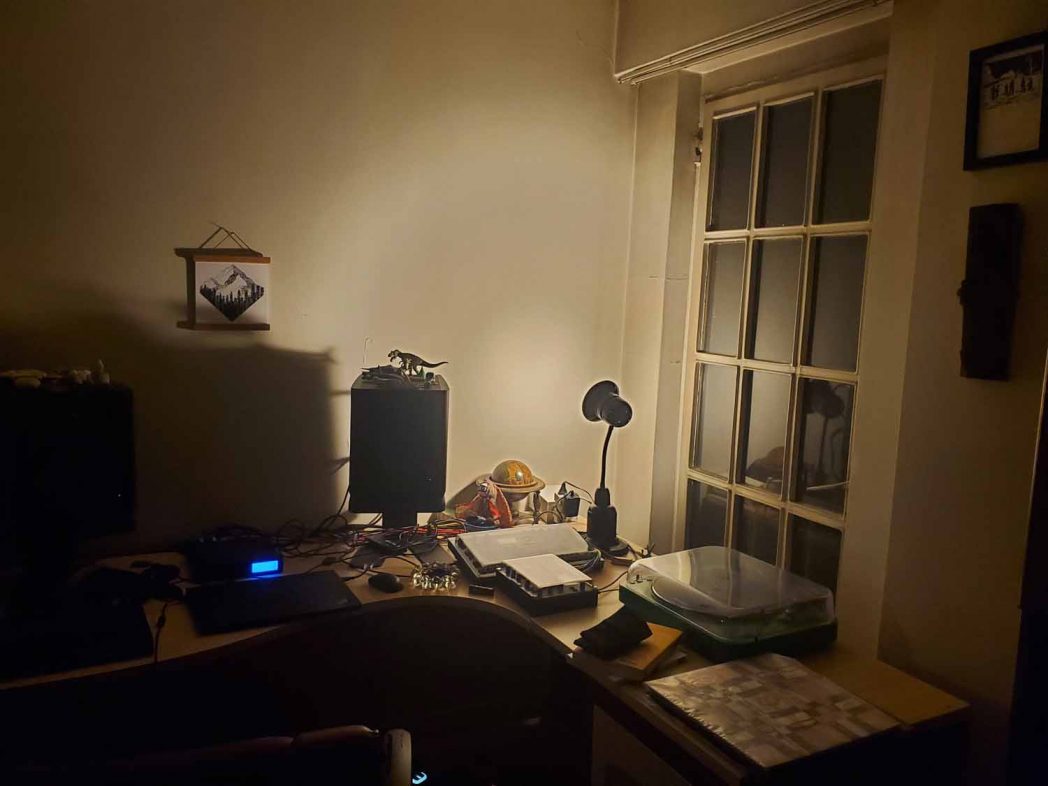 And finally, what are your thoughts on the state of “electronic music” today?
Electronic music has always been a vast genre of music with different avenues to be explored. At the same time, it has been around for decades now and many of its styles have become “standardized” and to some degree “defined”. What I like, in particular, about experimental electronic music as a subgenre and what takes place in that scene is the freedom that has been kept intact and somewhat pure. The liberating quality of experimentation is still what excites me the most. Of course, the meaning of the term “experimental” has always been shifting around and that’s something to be discussed more in-depth. For instance, in my personal opinion, ambient music might have been considered experimental 20 years ago but is way less so nowadays. If I want to pick a single act that has always been true to that sense of freedom and experimentation from the early years, I would name Autechre. In my humble view, they are a very fitting example of such quality and should be studied and listened to as a point of reference in music history.